One tiny sign of hope: At least Donald Trump's defense secretary seems to live in the real world

Admittedly, Trump's Pentagon nominee is kind of a hawk — but he's OK with NATO, the Iran deal and gender equity 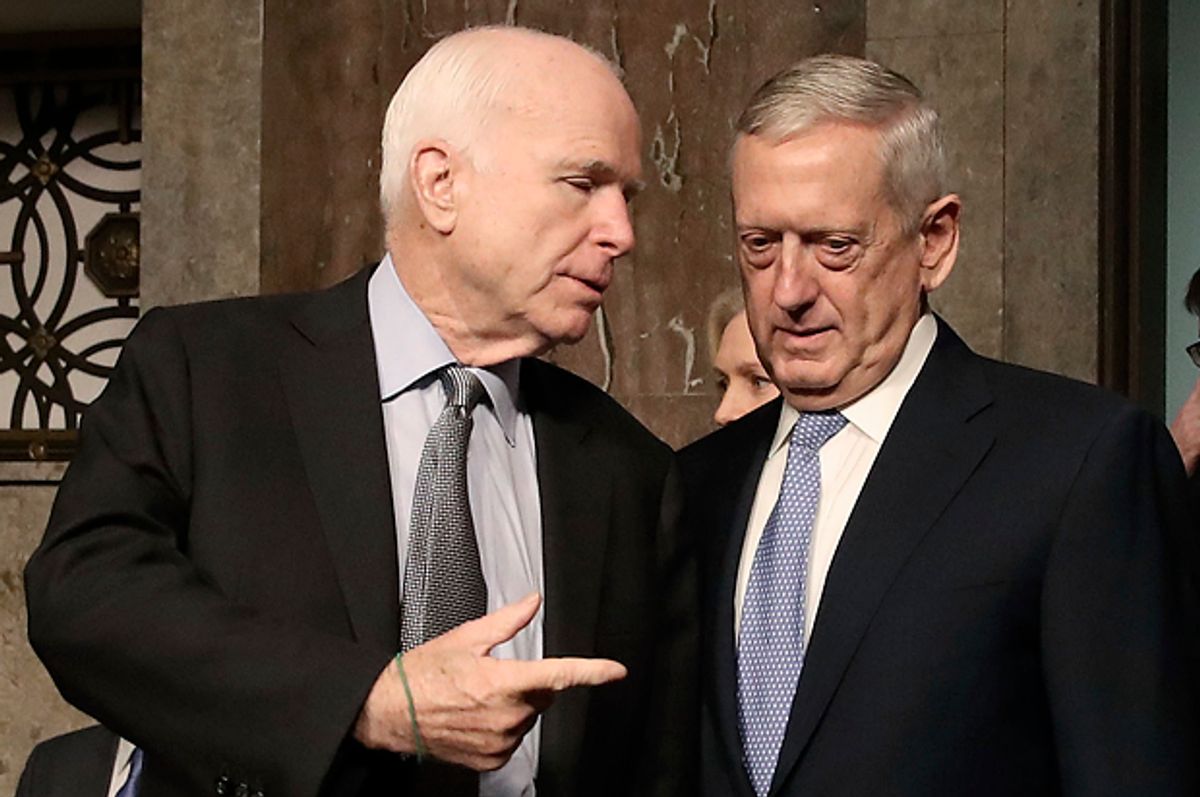 It is a measure of just how depressing every day of the presidential transition has been that Sen. John McCain and former general James Mattis can cheer you up. Or at the very least they can give reason for you to hope that not everyone in the Trump administration’s national security team will be a wild-eyed, burn-it-all-down lunatic.

Admittedly this is a slender reed on which to hang the hope that our civilization can survive four years with Donald Trump at the helm. But if Mattis’ testimony at his confirmation hearing to become secretary of defense told us anything, it is that he might have at least one foot planted in reality. Which, considering that Trump is filling out his national security team with crazed conspiracy theorists like Mike Flynn and Mike Pompeo, is no small thing.

So it came as something of a relief to watch Mattis on Thursday answer questions before the Senate Armed Services Committee chaired by the notably bomb-happy McCain in a way that reaffirmed he has not been absorbed (yet) into the Trump Tower Borg. To wit:

Mattis supports continuing to give women more jobs in the military, including in combat positions. This is an issue that was not talked about a great deal during the presidential campaign, but Trump has opposed integrating women more fully into the armed forces, as has his vice president, Mike Pence. “The Rachel Maddow Show” dug up a tape a few months ago in which Trump called having women in the military “bedlam,” and the president-elect has blamed the presence of women for the rate of sexual assaults in the ranks.

In addition, Mattis confirmed his belief in the importance of the North American Treaty Organization, calling it “the most successful military alliance . . . in modern world history, maybe ever” and said that Vladimir Putin would like to “break” NATO. This will surely come as a relief to America’s allies who still hope to look to it for leadership in the future. It is also an indication that Mattis is more clear-eyed than his boss about Putin’s intentions in weakening the liberal world order that the U.S. has led since the end of World War II. Considering all the paranoia that reports of Russian meddling in the election have unleashed, perhaps Mattis can act as a counterweight to whatever pro-Putin tilt Trump is likely to take.

And Mattis does not advocate breaking the Obama administration’s deal with Iran concerning its nuclear weapons program. This is a break from Trump, who has called it a “terrible deal” and promised to renegotiate it.

This is not to paint Mattis in too nice a light. He is still a hawk, particularly on the Middle East. It was Mattis' desire to be more confrontational with Iran regarding some of its provocations in the Persian Gulf that led to clashes with the Obama administration over its Iranian policy and eventually the general’s retirement from the military in 2013. He has seemed uninterested in the issue of sexual assault in the military, which came up only in one brief question from Sen. Joni Ernst, R-Iowa, on Thursday. But this is sure to be a major issue for the military in the near future as women continue taking larger and larger roles in the institution.

There is also the fact that Mattis needs a waiver from Congress to get around a law barring retired military members serving as leading civilian Pentagon officials for seven years after retirement. The law was intended to continue the tradition of civilian control of the military and the Defense Department, which the Founding Fathers saw as necessary. Still, the Armed Services Committee approved the waiver almost unanimously on Thursday. With Mattis' often-hawkish views, there is rightful concern that he will not be much of a restraint on use of the military by a president with a hair-trigger temper and no experience in international diplomacy.

Still, Mattis came off as a realistic, even-tempered believer in America’s place as a counterweight to some of the grander ambitions of countries like Russia and China in the Far East. With Donald Trump in the White House, he might be less terrible than we could have expected. It’s not much, but this is what passes for hope in the waking nightmare that Trump’s presidency is shaping up to be for anyone to the left of Genghis Khan.