On his way out the door, Obama's intelligence director seems to blame his staff for leaks about Trump meetings 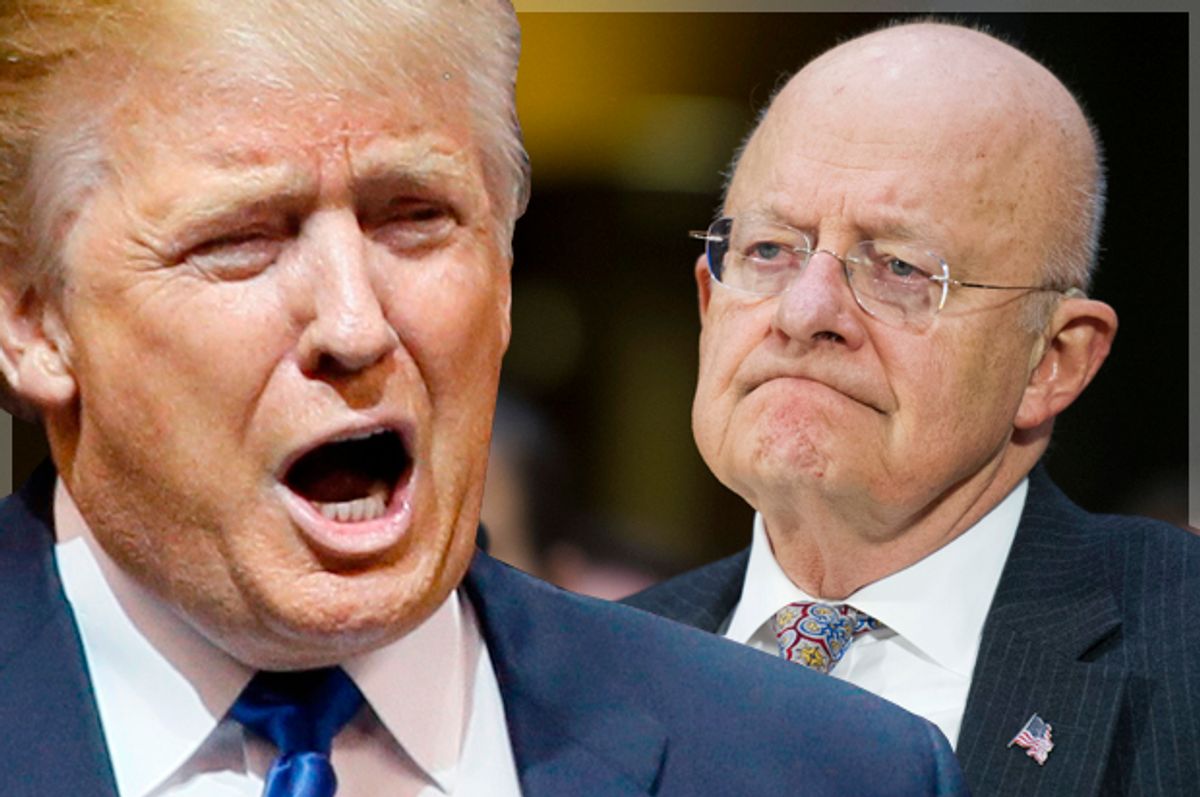 In a news release, Clapper referenced a meeting between Trump and himself when the director expressed "profound dismay at the leaks that have been appearing in the press” regarding intelligence materials that had been provided to the incoming president. Such unauthorized disclosures, Clapper continued, are “extremely corrosive and damaging to our national security.”

It’s unclear what specific leaks Clapper was referring to, given the fact that there have been many reports about conversations between Trump and the major U.S. intelligence agencies. One piece of information Clapper almost certainly had in mind was the now-infamous private "dossier" claiming that the Russian government had a variety of compromising information about the president-elect. That report has been circulating among anti-Trump politicians and journalists for several months.

In his statement, Clapper said that the document, which first had been mentioned by Mother Jones and more recently published in full by BuzzFeed and other outlets — and containing several unverified allegations about Trump's conduct — had not been known among the intelligence community before it began to spread among journalists and political figures. Sen. John McCain, R-Ariz., has said publicly he gave the controversial collection of documents to the FBI after it reached his desk, but it’s unknown whether that was the first contact the FBI or other agencies had with it.

Clapper did not say in his statement whether the privately produced report had been presented to Trump. Earlier this week, CNN had reported that a condensed version of the paper had been given to Trump as a part of his intelligence briefings but subsequently revised its report after NBC claimed otherwise.

In a story updated on Thursday, CNN wrote: "CNN has confirmed that the synopsis was included in the documents that were presented to Mr. Trump but cannot confirm if it was discussed in his meeting with the intelligence chiefs."

According to NBC, intelligence officials had considered informing Trump of the controversial document, but only in the context of drawing a distinction between solid information and what the network's anonymous source called “disinformation.” At a Wednesday news conference, Trump said he had first heard of the private report “outside that meeting.”

Clapper’s unusual public statement about a meeting he had with the incoming president was clearly meant as a response to an extended rant that Trump made at the news conference about the subject of unauthorized leaks and his efforts to determine whether current Trump Organization employees might be the source.

“What I did, is I said I won’t tell anyone,” Trump said, referring to a plan he devised to narrow down the potential source of leaked information about his meetings.

Despite his efforts to keep his staff in the dark, word about the security briefing still leaked out, Trump said. Presumably he meant to imply that the source could only be within the intelligence community.

“The meeting was held," Trump said. "They left," apparently referring to the officials who briefed him, "and immediately the word got out that I had a meeting. So, I don’t want that. It’s very unfair to the country."