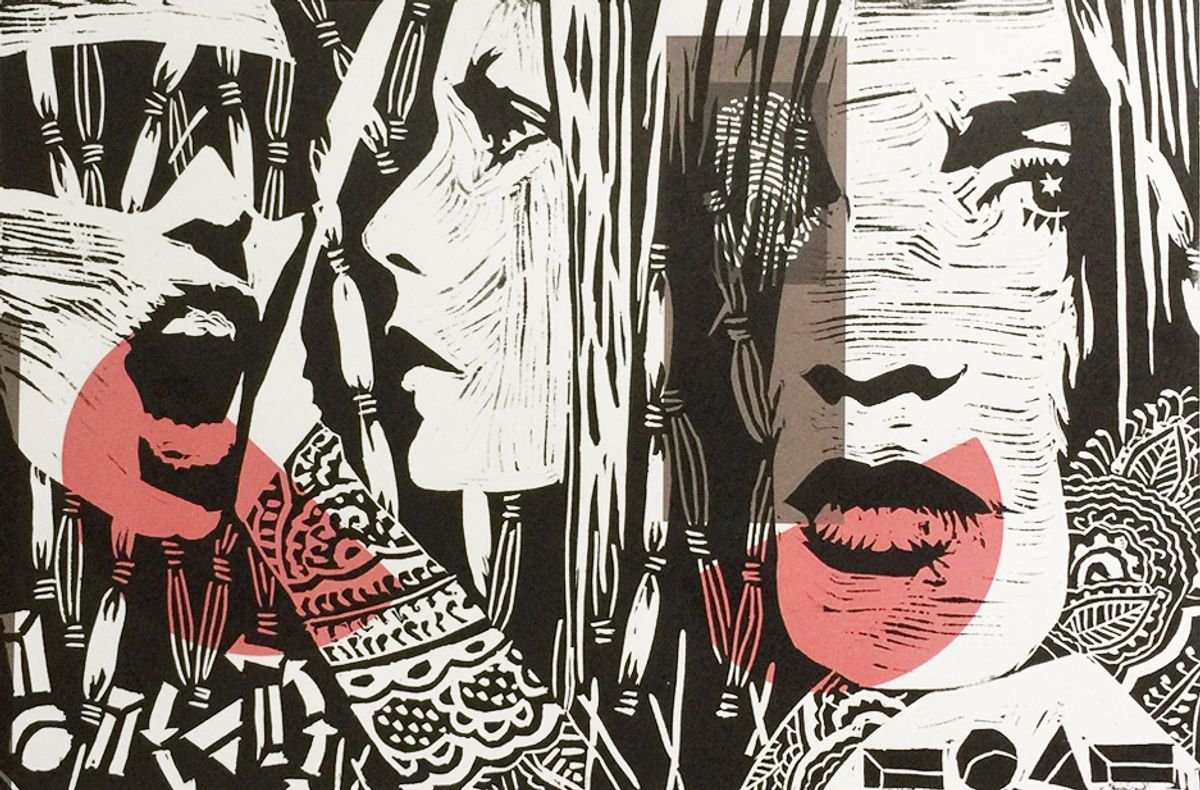 Donald Trump's election victory came as a shock to most Americans, one compounded by the fact that he did so despite losing the popular vote. For many women, it was especially troubling, as Trump is an overt and largely unapologetic misogynist who was caught on tape, bragging, with that memorable phrase "grab them by the pussy" about his approach to women.

As Trump moves into office, he is demonstrating how serious his misogyny is by making moves to strip women of reproductive health care and intimidating State Department officials suspected of believing in gender equality, as if that were a bad thing.

Instead of sitting around in shock, however, women in the art world are using their skills and creativity to stand up to Trump and defend feminism. Two current New York exhibits are showcasing women's artistic responses to the election: "Nasty Women" runs through Jan. 15  at the Knockdown Center in Queens, and "Uprise/Angry Women" is showing Jan. 17 to Jan. 28 at the Untitled Space gallery in lower Manhattan. In separate phone conversations with Jessamyn Fiore, the producer and co-director of "Nasty Women," and Indira Cesarine, who runs Untitled Space and curated "Uprise," the word "shock" came up repeatedly to describing how many women felt to watch a blatant misogynist like Trump beat a feminist like Hillary Clinton to win the presidency.

“Hillary’s loss was not only the loss of the first female president," Fiore said. "It was also the fact that she lost to a man who was caught in a recording bragging about sexual assault, who throughout the campaign was incredibly dismissive and intimidating and who used a lot of language and actions that are familiar to women as bullying.”

Said Cesarine: "I was in shock. I think a lot of people were." She added, "A lot of people in America right now are pretty much in shock, that we elected such a sexist future president.” What the organizers of both shows swiftly realized was that the best thing to do with that shock and anger was to turn it into action.

“The day the election happened and the results were announced and Hillary conceded was the moment that I felt I needed to start working on the exhibit," Cesarine said. "It was really my own personal response to the election results."

The "Nasty Women" organizers had the same reaction, according to Fiore.

“This whole thing started not that long ago, right after Trump was elected, the Saturday after the election," Fiore said. Organizers of both exhibits turned to social media to solicit submissions and found the response overwhelming. "Nasty Women" received more than 700 submissions and "Uprise" over 1,400, from more than 400 female artists. In the end, works by 80 artists were selected for inclusion in the "Uprise" show. In both cases, submissions came from all over the country and even overseas, from a diverse group of women united in their anger and contempt for Trump.

In response to the sizable outpouring of creativity — and anger — curators of both exhibits aimed to be as inclusive as possible. “Because there was such a strong and such an emotional response, I decided this couldn’t be your traditional group exhibition," Fiore explained. "That is, no matter who submitted work, we would accept it, so long as it followed our submission guidelines.”

Cesarine said of her exhibit, "Most artists actually created new work that responds to the situation and is inspired by how they have been feeling, or their intellectual response to what’s happening." Some might question the value of turning to art at this particular moment, but the exhibit organizers persuasively insist that it is a necessary and valuable response to the horror of the Trump election.

“Can art make a difference? I think it can," Cesarine mused. She noted that with social media's growing power, “Visual art has a much bigger relevance. It’s more accessible because of [the] elements of sharing it online.”

Fiore explained, “I’ve always been passionate about women’s rights, but [Trump's] election made me go, No, I actually have to really do something now: devote my time, devote what skills I have, devote my efforts and energy to make it clear we will not allow what rights we have as women to be taken away.”

Adopting the phrase "nasty women" right now packs a wallop, especially after Trump used the phrase to dismiss Hillary Clinton during their third presidential debate. Fiore argued that incorporating these words in a show's title helps women reclaim them as a badge of honor.

“‘Nasty’ is particularly used for women and used to dismiss our ideas, dismiss what we’re standing up for," Fiore said. "It's like, ‘Oh, she’s just a nasty woman; we don’t have to listen to her,'" she added. “By taking ownership of it, it’s empowering, and it’s turning that word around.”

Art alone cannot defeat Trump, of course. But it can clarify ideas and empower and inspire people. And don't knock the power of a show illustrating that other women are just as angry as you are. Thus art can help motivate people to get out there and organize, with the confidence of knowing they are right to be angry.

Both shows plan to donate their proceeds to charity. All the revenue raised by "Nasty Women" will be furnished to Planned Parenthood and a portion of the proceeds of "Uprise/Angry Women" will go to the ERA Coalition and its Fund for Women’s Equality.