An atheist's guide to Scorsese's "Silence": You don’t need faith to be astonished by the faithful

Martin Scorsese's new film “is about faith and God and Christendom that, ultimately, valorizes humanity 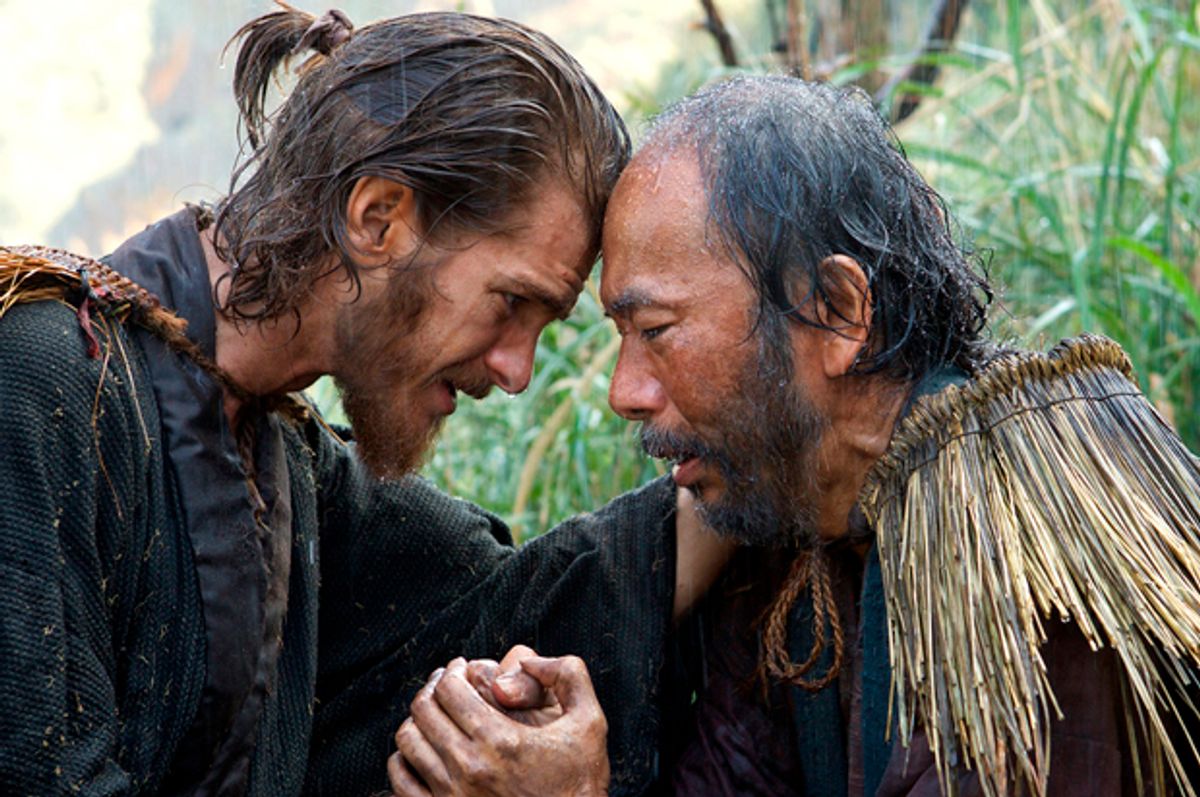 In 203 CE in Roman Carthage, a 22-year-old woman, still breastfeeding her infant child, was brought before the local administrator. Her name was Vibia Perpetua, and her crime was belonging to the emerging cult of Christianity.

Perpetua squared off against the Roman procurator — a mid-level government bureaucrat, playing the role of Christian-hunting Inquisitor — and a small assembly of gawkers. She was given every opportunity to recant her faith. But she would not. When asked point-blank if she was a Christian, Vibia Perpetua signed her own death sentence, asserting, Christiana sum.

Her prosecutor was seemingly confounded by her decision to die for her faith, desperately urging her to recant. As she recalls in her diary, the procurator pleaded, “Have pity on your father's grey head; have pity on your infant son. Offer the sacrifice for the welfare of the emperors.”

A modern reader may share this bafflement. Like, “Just do it! Just cross your fingers and repudiate Christ! You have a kid! It’s not worth it! Apostatize! C’mon!”

Throughout “Silence,” stone-faced apparatchiks of the Tokugawa shogunate test clandestine Christians — both Japanese peasants and the European missionaries who encourage them — to forswear their faith by stepping on a fumi-e: graven images of the Virgin Mary, or of Christ Himself.  Many concede, fingers crossed, knowing they can absolve their blasphemy later. But Garfield’s Father Rodrigues resists. He draws strength from his devotion, clenching his faith like a fist.

Religious subjects have proved voguish Hollywood premise-generators in the past few years. Still, stuff like Ridley Scott’s “Exodus: Gods and Kings” and Darren Aronofsky’s “Noah” are Biblical only in the broad, descriptive sense of the word. They rework the fire-and-brimstone dramas of the Old Testament as modern superhero blockbusters. Part of what’s so remarkable about “Silence” is its sheer un-fashionability. It’s a film that takes matters of faith and devotion seriously. And, even more daringly, it asks viewers to do much the same — to make their own leap of faith.

For my part, such a jump required no dextrous moral gymnastics. This may seem odd, or counterintuitive, because I count myself as an atheist who would seem predisposed to find the suffering and passion “Silence” depicts silly, if not altogether pointless.

I was raised and schooled in the Catholic Church, and went through all the rituals and sacraments: baptism, first communion, confession. When I was in eighth grade, and preparing for confirmation — which is sort of like a re-baptism, where the idea is you’re enough of an adult to willingly and conscientiously commit yourself to Christ, even if your face is still riddled with acne and your favourite band is KoЯn — I came to the realization that I didn’t really believe in any of it. My father, who was Protestant, convinced me to go through with it anyway, lest I risk making a big fuss and disappointing my Catholic mother (to say nothing of my very Catholic grandmother).

Throughout high school, I read the gospels in church on Sunday, smirking and self-satisfied about the low-key blasphemy I was committing by regaling the congregation with “the word of our Lord.” At that age, being an atheist seemed edgy and defiant in a way that is (only now, of course) howlingly adolescent, like listening to Marilyn Manson or sneaking cigarettes out by the old guardrail at lunch break.

As I shambled through my 20s, my lack of faith felt more and more like that: a lack. I remember reading Thomas Hardy’s poem “Hap,” in which atheism is presented not as some launchpad into a higher realm of intellectual and moral refinement, but an acutely felt loss. “How arrives it joy lies slain,” Hardy writes, “And why unblooms the best hope ever sown?” Amen, brother.

The cultural ascent of atheism, paradoxically, didn’t help much. Prominent atheists such as Richard Dawkins, Sam Harris, Ricky Gervais, Stephen Fry and Christopher Hitchens traded compassion for a stone-cold rationalism, smug that their belief in a godless world made them intellectual superiors of the drooling masses huddled in church pews on Sunday. They were saggy, inspiring visions: basically my ninth-grade self aged 40 years, with an Iron Maiden t-shirt swapped for a crisp oxford and blue blazer. That the so-called “New Atheists” used their smart-alecky reasoning to promote agendas of bigotry and anti-Muslim bias made them seem not just obnoxious, but treacherous — enemies of progressivism. (And don’t even get me started on the dorks and doofs who enlist in the ranks of the Church of the Flying Spaghetti Monster.)

Don’t get it twisted: In the age of the Westboro Baptist Church, the Islamic State, and babies contracting herpes from moils performing ancient, unsanitary circumcision rites, taking part in organized religion still seems to me faintly ridiculous, if not altogether dangerous. But the New Atheist notion that hectoring about “logic” and even “science” will somehow introduce disbelief into civilization’s atmosphere like fluoride into a water supply, that you can just simply wish religion away, strikes me as just as stupid.

With neither the capital-c Catholic Church (or any formalized belief system) nor the prominent god-hating intellectuals to identify with, that chasm of faithlessness only widened. Lately, I find myself arguing not against religion but in favor of it. More and more, I sympathize with the idea and meaningfulness of faith, even while bucking at least a commandment a day, and regularly enjoying a record titled “Howl Mockery at the Cross.”

Late in the evening, when I walk my dog past Portuguese Catholic parishes in my neighbourhood, I sometimes entertain the notion of going in. But it’s not long before the thought perishes altogether, obliterated by my knowledge that, deep down, in the ol’ heart of hearts, I don’t actually believe in God, or his only begotten Son, or the Communion of Saints and the Forgiveness of Sins, or much of any of it. Still, I feel tempted; drawn back toward the flock like some wayward black sheep. As Agent Mulder used to say, “I want to believe.”

“Silence” played directly to this yearning, this hankering to wad up the gaping hole inside of me. What lingers about film is the astounding, utterly human arrogance of Garfield’s Father Rodrigues. Throughout, the padre aspires to displays of fidelity that rival those of Christ Himself. In this sense, “Silence” offers a counterpoint to Scorsese’s other major theological work, 1988’s “The Last Temptation of Christ,” in which Jesus (an oddly cast Willem Dafoe) aches to buck his literal cross-to-bear and indulge a life of humdrum humanity.

Watching the inquisition scenes in “Silence,” it’s hard not to feel a bit like the Roman administrator and executioner who condemned St. Perpetua, and so many others. There’s a jaggy frustration seeing Father Rodrigues hold so stubbornly to his beliefs, especially as more and more native  Japanese Catholics are tortured and slain in his stead, an inversion of that line in the Gospel of Matthew about how Jesus came “to give His life for the ransom of many.”

Scorsese masterfully engineers this push-pull between our desire to see Rodrigues renounce Christ and our competing desire to see him hold on, like a drowning man to a life raft. (It’s sort of like how “Raging Bull” manages to wring out real sympathy for DeNiro’s bloated boxer Jake LaMotta, regaling boozy nightclub crowds with bad jokes and interminably flat lounge singing routines, despite the fact that we know he’s a selfish, abusive piece of trash.)

During the extended faith-testing set-pieces, Scorsese and longtime editor Thelma Schoonmaker cut between Rodrigues, his glowering inquisitors, and the solemn saintly faces on the fumi-e as if ratcheting up a snowballingly tense Mexican standoff of the soul. This spiritual strain is reworked in the film’s last act, which sees Rodrigues enlisted by the Japanese authorities to inspect imported European artifacts for any religious subtext, glumly intoning, “Christian, not Christian, Christian, not Christian,” as if he were picking the petals off a daisy: “He loves me, He loves me not…” Hope unblooms then blooms again.

Like so many of Scorsese’s films, “Silence” ends with its hero displaced, like Ray Liotta’s Henry Hill shuffled into Witness Protection or “Taxi Driver’s" Travis Bickle trapped in the delusive rhythms of his own psychosis. Rodrigues relinquishes his quest for total, obliterating, Christlike love, and accepts the ho-hum prospects of humanity. Abandoning his vainglorious quest for martyrdom and apostatizing may seem bittersweet, but it demands its own kind of tremendous constitutional brawn. “Silence” asks the faithful to take their own keep of faith — out of devotion and into secularism and blasphemy, for the betterment of their fellow human beings.

This, I think, is why I find “Silence” so strenuously affecting. It’s not that I share Father Rodrigues’ anguish. Hell, if some Edo-era anti-Catholic cop held a samurai sword to my jugular I’d probably dance the Hully Gully across a ceramic floor tiled with engravings of saints and howl mockeries at a cross ’til I was hoarse. But that’s the thing, isn’t it?

What the characters in “Silence” possesses is that which faith ultimately bestows: strength. And even if you believe, as I do, that there is no God and that there’s no army of angels juicing the spirit with the fortifying stuff of religious devotion, then doesn’t that strength just proceed from inside? From the tortured muddle of humanity itself? And isn’t that even more amazing?

“Silence” is a film about faith and God and Christendom that, ultimately, valorizes humanity in all its messiness and compromise. As in many of Scorsese’s films, religion serves as a standard to which characters aspire, and fall tragically, beautifully short of. It’s a film that asks us to look past the yawning chasms of belief and disbelief that separate people, to draw the faithful and faithless closer together. “Silence” asks the atheist, the agnostic and the just straight-up apathetic not to believe, but to imagine the agony of what it might be like to believe.

As an artwork that inflames those basic flickers of empathy and understanding that make the whole project of human civilization tolerable -- as Dafoe’s dying Jesus exclaims in “Last Temptation” in his exultant last gasp — it is accomplished.