Cuba sees explosion in internet access as ties with US grow

Buying internet cards to access wifi in Cuba may become a thing of the past: service is improving, costs are down 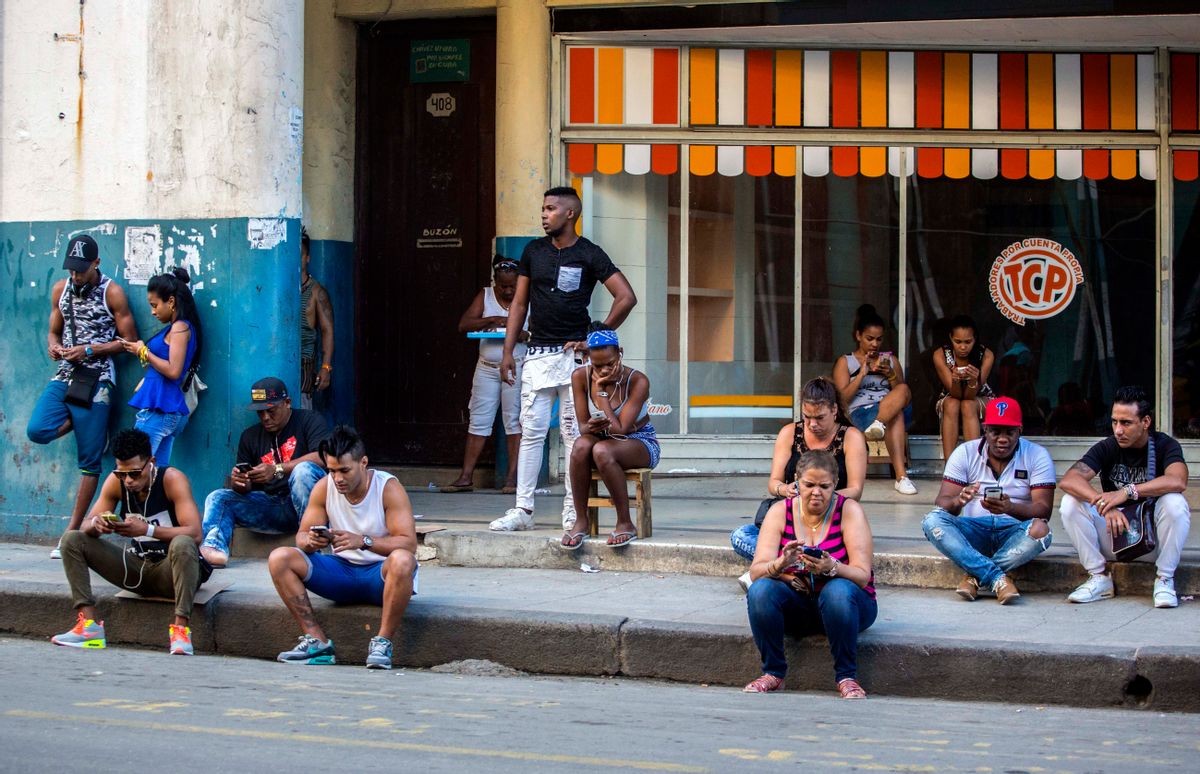 In this Jan. 6, 2017 photo, people use a public wifi hotspot in Havana, Cuba. Home internet came to Cuba in December 2016, in a limited pilot program that’s part of the most dramatic change in daily life here since the declaration of detente with the United States on Dec. 17, 2014. (AP Photo/Desmond Boylan) (AP)
--

The 55-year-old theater producer connected the device to his phone and his laptop computer, which instantly lit up with a service unimaginable in the Cuba of just a few years ago — relatively fast home internet.

"It's really easy to sit and find whatever you need," Gonzalez said as he sat in his living room updating his Facebook account, listening to Uruguayan radio online and checking an arriving tourist's landing time for a neighbor who rents rooms in their building in historic Old Havana. "Most Cubans aren't used to this convenience."

Home internet came to Cuba last month in a limited pilot program that's part of the most dramatic change in daily life here since the declaration of detente with the United States on Dec. 17, 2014.

While Cuba remains one of the world's least internet-connected societies, ordinary citizens' access to the internet has exploded over the last two years. Since the summer of 2015, the Cuban government has opened 240 public Wi-Fi spots in parks and on street corners across the country. Cubans were previously restricted to decrepit state internet clubs and hotels that charged $6-$8 for an hour of slow internet.

In a country with an average monthly salary of around $25, the price of an hour online has dropped to $1.50, still steep but now well within the range of many Cubans with private income or financial help from relatives abroad.

The government estimates that 100,000 Cubans connect to the internet daily. A new feature of urban life in Cuba is the sight of people sitting at all hours on street corners or park benches, their faces illuminated by the screen of smartphones connected by applications such as Facebook Messenger to relatives in Miami, Ecuador or other outposts of the Cuban diaspora. Connections are made mostly through access cards sold by the state monopoly and often resold on street corners for higher prices.

The spread of connectivity has remotely reunited families separated for years, even decades. It's fueled the spread of Airbnb and other booking services that have funneled millions in business to private bed-and-breakfasts owners. And it's exposed Cubans to a faster flow of news and cultural developments from the outside world — supplementing the widespread availability of media spread on memory drivers.

Cuban ingenuity has spread internet far beyond those public places: thousands of people grab the public signals through commercially available repeaters, imported illegally into Cuba and often sold for about $100 — double the original price. Mounted on rooftops, the repeaters grab the public signals and create a form of home internet increasingly available in private rentals for tourists and cafes and restaurants for Cubans and visitors alike.

While the explosion of internet in Cuba has taken place alongside the process of normalization started by Obama in 2014, it's unclear how much better relations have speeded up Cuba's move online.

Obama said in announcing detente that he welcomed "Cuba's decision to provide more access to the Internet for its citizens," but neither Obama's team nor Cuban officials have detailed whether that decision was directly linked to negotiations to restore diplomatic ties and began negotiations.

What is clear is that Cuba began to dramatically increase access about six months later when the government began opening Wi-Fi spots around the country. For many Cubans, the start of home internet in December is potentially even more significant, breaking a longstanding barrier against private internet access in a country whose communist government remains deeply wary about information technology undermining its near-total control of media, political life and most of the economy.

The pace of change in Cuba often depends on the state of relations with its giant neighbor to the north: both tensions with the United States and leaps forward like Obama's visit to Havana last year have prompted crackdowns by hardliners worried about the government losing control. While President-elect Donald Trump's administration has promised to take a harder line on Cuba, both opponents of President Raul Castro's government and those advocating closer relations favor more access to information for ordinary Cubans.

That's far slower and wildly more expensive than internet in most of the rest of the world. In the Dominican Republic, for example, a full month of relatively slow 2 megabyte-per-second internet, a speed most people would consider reasonable for applications such as streaming video, costs a little more than $20.

Cuba depended on slow, expensive satellite internet until 2013, when it opened a fiber-optic cable to Venezuela that connected the island to the global online infrastructure.

Cuba says that its still-high internet prices are a result of costs imposed by the U.S. trade embargo on the island. Independent observers blame the costs on political decisions to limit access, and on the cash-strapped socialist government's widespread use of its monopoly power to extract as much money as possible for goods and services considered luxuries. Many young people hope that the spread of access in recent years is the start of Cuba seeing internet more as a necessity and a right, like the free education and health care guaranteed by Cuba's socialist system.

"In my dreams, I'd like for the internet to be seen like arts and culture, and, as such, to be free for the whole population, just like access to education has been for the last 50 years," said David Vasquez, the 27-year-old director of the online magazine Cachivache Media. "It's very hard to know what the future will bring."