After years of drought, the Golden State is hit by epic storms — and it's just the beginning of climate chaos 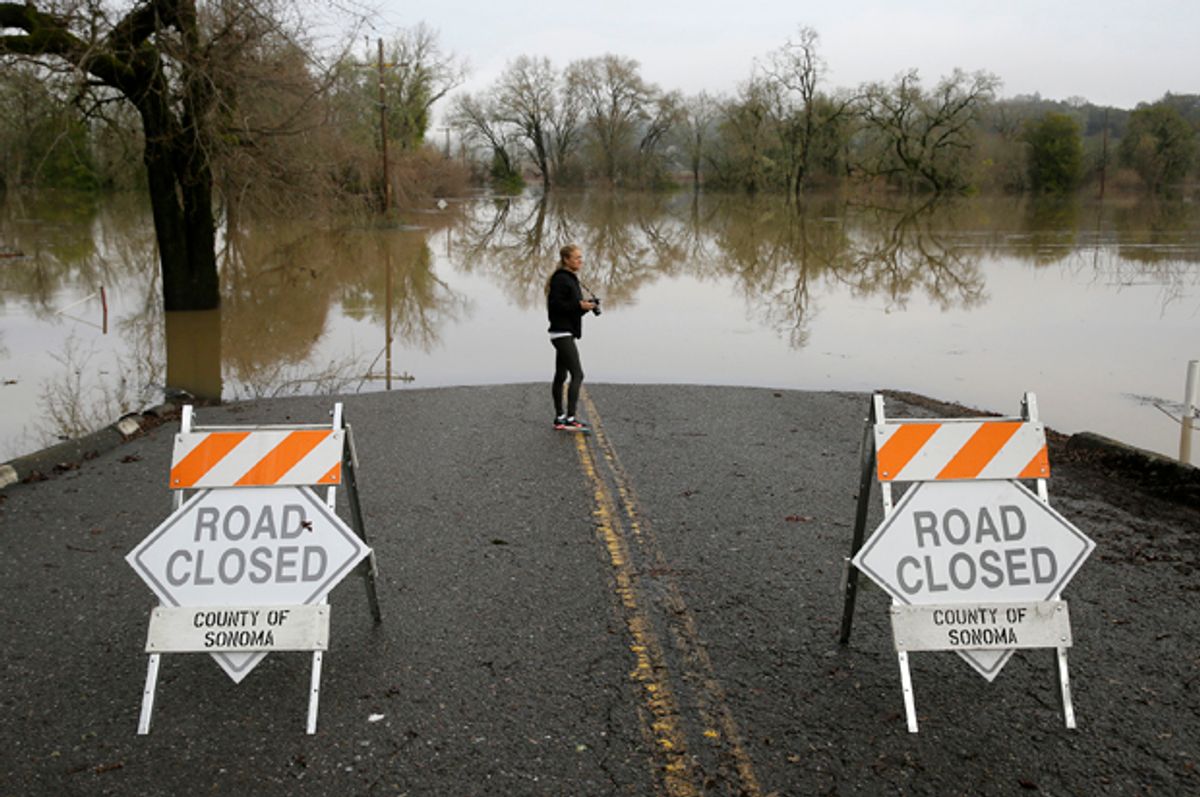 Michelle Wolfe, who had to evacuate her nearby mobile home, looks out toward flooded vineyards in the Russian River Valley, Monday, Jan. 9, 2017, in Forestville, Calif. (AP/Eric Risberg)
--

As the incoming Trump administration turns Washington increasingly freakish and bizarre, reinventing government as reality show, Mother Nature is doing something equally dramatic 3,000 miles away. Donald Trump can deny climate change all he wants to, but Californians can’t escape the contrasting weather extremes it’s already causing or affecting. We're in a cycle of ever more serious droughts broken by more intense storms — harbingers of much more serious challenges to come. What’s happening in California now serves to underscore long-term realities, regardless of the day-to-day fantasies of those who temporarily hold political power.

A series of storms from the vicinity of Hawaii, known as the “Pineapple Express,” have drenched California and parts of Nevada, signaling a likely end to four years of severe drought. Just during the storm that hit Jan. 7 to 10, there were 52 reports of extreme precipitation (meaning more than eight inches of rain in a three-day period), with several measuring twice that. Strawberry Valley, on the western slopes of the Sierra Nevadas, got an amazing 20.51 inches of rain during that storm -- more than Los Angeles typically gets in an entire year.

The Pineapple Express is just one example of a worldwide phenomenon known as "atmospheric rivers" or ARs. These are jet streams of moist air, tens to hundreds of miles wide, that can carry roughly 10 times as much water vapor as the Mississippi River at its mouth. Powerful as the current set of AR storms are, they pale in comparison to the month-long storms of 1861-2 that flooded much of the state, creating a 300-mile lake in the San Joaquin Valley. But even worse is possible. In 2011, the U.S. Geological Survey did a study of what a 1,000-year atmospheric river storm — known as ARkStorm — would do. Projected losses were staggering, including property losses around $400 billion (more than three Hurricane Katrinas) with another $325 billion in losses due to business interruption, lasting as long as five years. So Californians are lucky today.

The percentage of the state that is defined as "drought-free" has almost doubled overnight, from about 18 percent to 34.5 percent, according to the U.S. Drought Monitor. The drought-free area is largely in less-populated Northern California, above an east-west line running from San Francisco to Lake Tahoe, but there are broader signs of hope for the whole state.

“This is likely to be the end of the surface-storage drought for most of the state,” wrote water expert Jeffrey Mount, of the Public Policy Institute of California. With a few more days of rain, he predicted, “almost all the major reservoirs will be at or above their seasonal averages … conditions we have not seen in six years. This is great news since reservoirs are the primary source of water for cities and farms.”

Still, the good news has to be sharply qualified. Even before California’s latest drought, a much longer, continent-wide drought was underway, as shown in this panel of eight annual drought maps from the 2009 paper "Megadroughts in North America" by Edward Cook and co-authors. In a related document, they show that during the medieval period, from 1021 to 1382, the majority of the continental U.S. experienced four megadroughts lasting 22 to 40 years, interspersed with occasional isolated non-drought years. These were three to four times longer than similar modern multi-year droughts from 1855 to 1957, which ranged from seven to 10 years. Thus, California’s climate this century is already atypical for the modern era. The state may already be in the middle of a medieval-style megadrought. The state needs more than one good year of rain to begin breathing easier.

The underlying science behind these phenomena is increasingly coming into focus, according to Marty Ralph, director of the Center for Western Weather and Water Extremes at Scripps Institution of Oceanography. “It has been shown that in major parts of the West drought is due to a reduced amount of precipitation from the wettest days, many of which are AR events,” Ralph told Salon.

“We have also known for about 10 years now that most of the big flooding events in the West Coast, at least, are a result of atmospheric rivers. These findings are especially strong in the West Coast and Southwest, and in Western Europe. Thus, indeed, the future of drought and flood in this region hinges on the fate of ARs. And climate models vary substantially in how they handle this.”

What is certain is that both extreme drought and extreme AR storms, driven by global climate change, pose growing challenges to California and many other places in the decades ahead. The divergent extremes place increasing stress on the whole ecosystem, as well as its physical underpinnings. “It’s a really bad combination of two extremes,” MIT’s Adam Schlosser told Pacific Standard. “The drought dries, and, in some sense, cooks up the ground. It becomes more susceptible to heavy rain. You’re putting together a meta-event that could be quite destructive.”

Schlosser was discussing a paper to which he contributed projecting that California will experience three more extreme precipitation events per year by 2100, although the number could be reduced by half that if aggressive policy measures are pursued. These results are more dramatic, but point in the same direction, as research published last summer by Christine Shields and Jeffrey Kiehl at the National Center for Atmospheric Research in Colorado.

Shields agreed with Schlosser’s warning. “Drought-stricken areas can be significantly damaged by heavy flood,” she told Salon. Although she hadn’t yet read Schlosser's paper, she warned against overemphasizing any differences. “The different climate projections found in the literature may be due to, in part, a difference in the way the ARs are defined and tracked,” she noted.

It’s also important to distinguish between different measures. “Intensity of rain is not the same thing as overall rain totals, or mean [average] rain," Shields said. "Potentially stronger rainfall rates would lead to increased likelihood for localized flooding, or flash flooding. Longer durations of storms also might imply increased likelihood for overall rain within the storm itself. It doesn't say anything about changing the mean rainfall over a given season or region. Any way you slice it, projections should be used as guidelines and not ground truth.”

Those guidelines are all pointing in the same general direction: more climate and weather problems, and more intense problems. But sorting out the differences will be crucial for developing policy responses, Ralph stressed. “The already high variability of annual precipitation in this region could become even more variable in future climate scenarios,” he said. “We don't have a good handle on which climate projections handle ARs best in the future, and those projections differ substantially in how these events look in the future.  We need to pin this down better, to help inform policy-makers on what to expect in the future for water supply and flood risk.”

When asked what can be done to improve policy responses, Ralph replied, “A major effort is needed to improve short-term predictions of ARs, so that information could be incorporated into myriad decisions made when extreme precipitation occurs, from reservoir operations to transportation to emergency response to flood control, landslides and other impacts such as we've seen in California, Nevada and Oregon" over the past few weeks. "Because ARs are the key to seasonal precipitation in this region, we now know what to focus on in terms of research."

A continent away from Washington, this is what reality-based public policy planning looks like in the age of inexorable climate change. But that doesn’t mean climate science is infallible. Last winter many forecasters predicted significant precipitation fueled by the Pacific climate cycle known as El Niño, and as Ralph puts it, that was a "bust." At the moment, there are scientific limits on the "predictability of water in the West,” he warned. “We also have the fact that hurricanes and tornadoes attract much of the attention and funding in meteorology. It has been difficult to get adequate focus on these Western water issues.”

Ralph's center is "creating new AR-oriented forecast tools, built upon new science,” he said. Information about this can be seen in real time on the center’s website, including a "What's New" section that has brief examples of these products for this last series of storms. You can even sign up for automated email alerts issued daily when there are extreme precipitation events in the West (like the 52 such events mentioned above).

As Californians weather the tail end of this dramatic string of storms, it can be comforting to realize that so much is being done to advance our understanding of the climate challenges facing America's most populous state. That understanding is starting to translate into better ways of coping with what’s to come, however challenging that future may be. The reality-based community that is mobilizing to protect California’s precarious future in the face of climate change is a model worth celebrating -- and also duplicating, in as many realms of public policy as possible. Finding ways to do that that is a top priority for all of us, wherever we live.