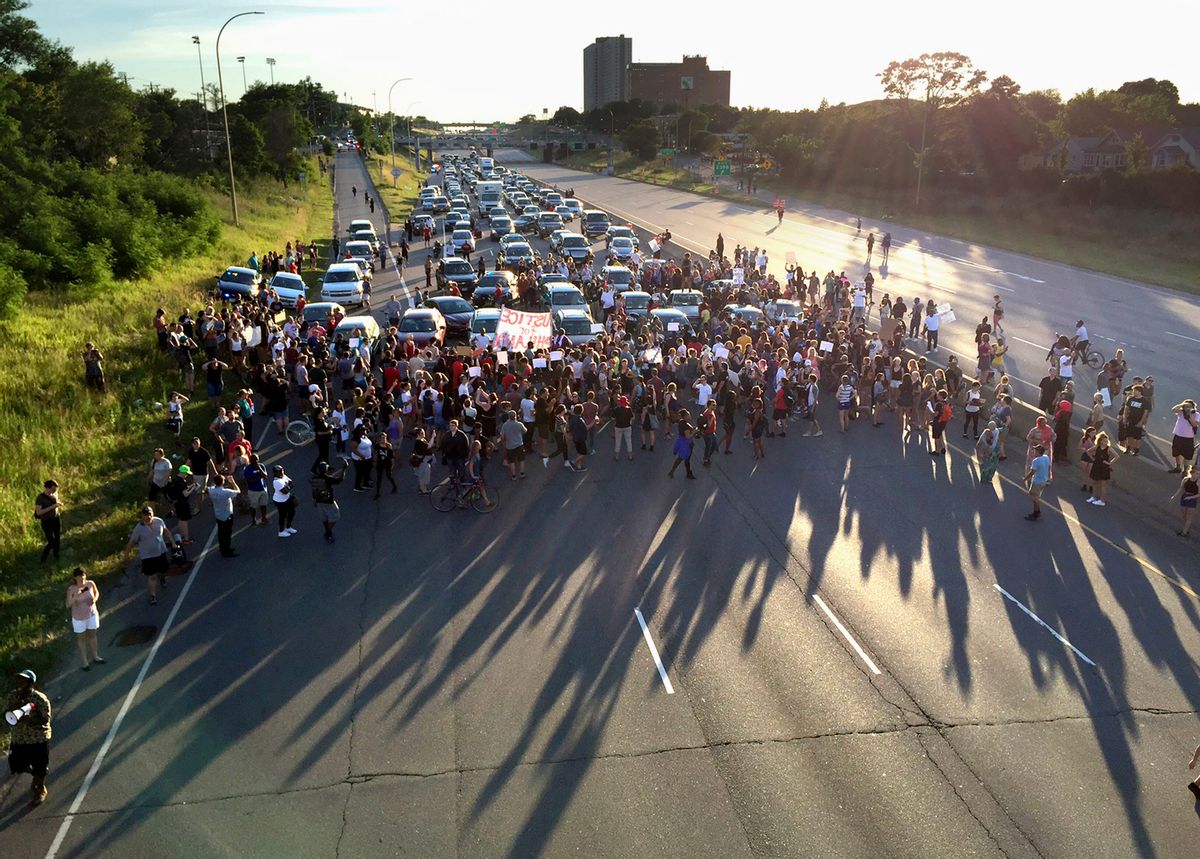 FILE - In this July 9, 2016 file photo, marchers block part of Interstate 94 in St. Paul, Minn., during a protest sparked by the recent police killings of black men in Minnesota and Louisiana. The killing of Philando Castile by a Minnesota police officer during a traffic stop last week tore open wounds that hadn't yet healed in Minnesota's black community from a previous officer-involved death last year. (Glen Stubbe/Star Tribune via AP, File) (AP)
--

A Minnesota lawmaker proposed new legislation this week that would heighten the penalties for protesting on freeways in the state. The current law involving unlawful assembly on a highway amounts to a misdemeanor carrying fines up to $1,000 and 90 days in jail. The new bill, introduced by Minnesota Rep. Kathy Lohmer, would make the act a gross misdemeanor carrying fines up to $3,000 and one year in jail.

Last July, following the police shooting death of Philando Castile in the Twin Cities suburb of Falcon Heights, a protest march in St. Paul migrated onto a highway, disrupting traffic for hours. Over 100 protestors were taken into custody, as objects like rocks and even molotov cocktails were reportedly thrown at officers, resulting in 31 police injuries.

After the election, in which President-elect Donald Trump lost the state of Minnesota narrowly in a surprisingly tight race for a reliably Democratic state, students and activists gathered on the University of Minnesota campus for an anti-Trump rally. They would later march onto the same Instate 94 highway as they did for Castile — again blocking traffic for hours.

Lohmer, a Republican from Stillwater, Minnesota, said the growing popularity in freeway protests present a threat to public safety.

"You need to obey the laws of the freeway," Lohmer said. "They are there for a purpose. Freeways are not really public spaces, like parks and places like that. You need a license to drive on the freeway. You can't walk on the freeway."

A civil rights attorney told WCCO, a local CBS affiliate, that the proper place to protest is a space that will attract the most attention.

"These proposed laws that make it a much more serious offense to engage in non-violent peaceful protest are designed to scare people away so that they wont engage in this sort of protest," Jordan Kushner, the attorney, said. "I sympathize with people who have to get someplace. But it's the cost of living in a society where people can express themselves politically."