Tracking timekeeping software: You might be punching the wrong clock 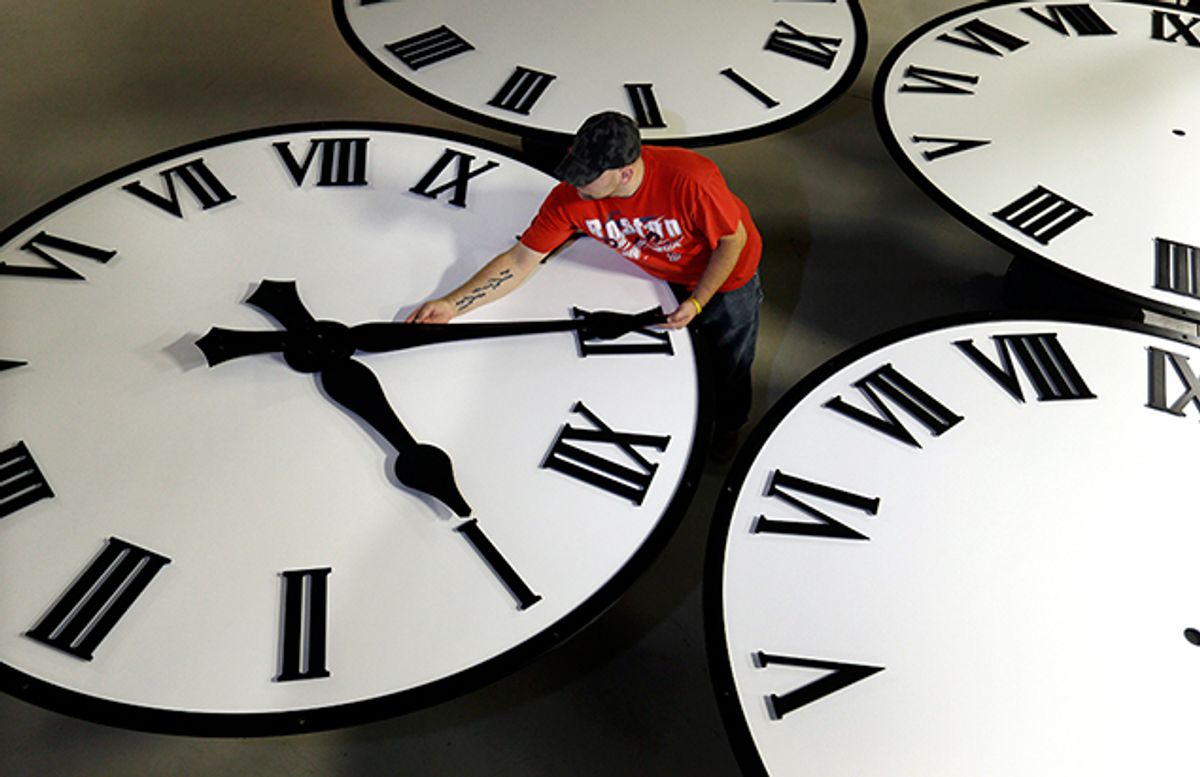 If you work on an hourly basis, you may not have given much thought to what happens to your hours after you log out of your workstation. You might assume those hours are simply converted into dollars and show up on your paycheck.

However, there are a lot of ways employers can manipulate your time using timekeeping software, some of which are legal and others highly questionable.

About 60 percent of U.S. employees are paid on an hourly basis. To keep track of those hours, most employers use some form of electronic system. This adds up to a mountain of data, so employers use software to manage that data before turning it over to payroll.

In collaboration with fellow researchers Charlotte Alexander and Zev Eigen, I examined 13 different timekeeping software programs by reviewing software tutorials, technical support materials and promotional information. This gave us some insight into the features available through the software. Our findings were recently published in the Yale Journal of Law and Technology.

These features allow employers to alter your time in a variety of unexpected ways, which we describe below.

First a little background on why software companies include these tools in their programs and why employers are able to take advantage of them.

The federal regulations that govern how employers manage hourly records are hopelessly outdated. They were drafted by the Department of Labor in 1987 and did not contemplate the ease and scale with which timekeeping records can be modified.

The recordkeeping rules were crafted around paper-based records and still refer to time “cards” and “microfilm.” As much as the old punch card machine is seared into our collective memories, most employers now use sophisticated digital systems. Employees log in and out through a computer, badge reader or smartphone. These logins are synced with the timekeeping software. The software can then make automatic changes to the time, which supervisors can review and edit.

This has left software makers free to compete on features that ultimately serve to disadvantage workers, with little accountability.

Rounding your time away

One of the more common features we observed in software programs was known as “rounding,” in which an employee’s times are rounded to a preset increment such as the nearest 15-minute mark (1:00, 1:15, etc.).

It seems fair in theory. But when rounding interacts with employer attendance policies, it can hurt employees. You’re more likely to log in a few minutes early to avoid getting in trouble for being late. But those extra minutes are rounded away. Rounding operates like “house odds” at a casino – you might win here or there, but in the aggregate, the house always wins.

These minutes add up. A 5-minute loss per day adds up to 100 minutes a month per worker. If that person is working full time, those minutes may also be overtime, which federal law dictates must be paid at a 50 percent premium to the hourly rate. Multiplied across an entire workforce? That’s a lot of wages that workers don’t get to keep.

Surprisingly, rounding is generally allowed under existing rules. It’s a decades-old accommodation to employers previously forced to calculate hours manually. But there’s no good reason to permit rounding when software can calculate hours to the millisecond.

For example, if you’re scheduled to take a 30-minute lunch break, that time can be deducted from your hours automatically, regardless of your actual time records. (Here’s an example of an employer’s automatic break deduction setup.)

There is a certain efficiency in this feature, and its legality depends on the circumstances in which it is applied. But like rounding, it is structured as a form of house odds. The presumption works in the employer’s favor, and the employee usually must engage in some sort of override to be paid for a missed break – like notifying a supervisor or filling in paperwork.

Timekeeping software is commonly structured to give supervisors access to – and the authority to modify – the timecards of employees who work for them. Typically, the screen lists the names of each direct report and a button allowing them to “edit” the time.

There are legitimate reasons to give supervisors access to employee time, such as to correct mistakes like a missed punch. But the list of legal reasons that would justify changes to an employee’s time is pretty short.

Once an employee has already worked the hours, state and/or federal law generally requires employers to pay them. Otherwise, it’s wage theft.

Software makers seem unconcerned by the possible misuse of the software. Instead, the software present subtle behavioral cues that could legitimize unlawful wage practices. A button labeled “edit” rather than “correct” suggests that it is okay to “edit” wages for purposes other than fixing mistakes. For example, if an employee works unauthorized overtime, a supervisor may mistakenly believe those hours can be shaved because they were unauthorized.

One program allowed certain users to alter hours using a slider that could be dragged forwards or backwards. The slider was advertised next to a picture of a child on a slide, hinting that altering an employee’s hours is “fun.”

A slider is problematic from a behavioral standpoint because it allows supervisors to morally distance themselves from what they are doing. Social psychology research suggests that people are more likely to engage in unethical conduct when it is distanced from stealing – for example, stealing pens from the office versus taking money from petty cash. The experience of moving a slider on a screen feels very different from taking money out of an employee’s pocket.

Another program had a pop-up window for supervisors to review overtime hours. The window offered three options: to pay “all,” “none” or “some” of the overtime. This is also problematic from a behavioral standpoint, because users may infer from the buttons that “some” or “none” is a reasonable option. To the contrary, wage and hour law requires employers to pay for all overtime hours already worked.

A third program had a “carry forward hours” function, which moved hours from one pay period to a future period. We were at a loss to think of any legitimate use for this function and surmise that it is used to avoid overtime.

Our study looked only at the software features available on the market – we did not study how frequently the features were used for unlawful purposes. However, even if misuse of the software is extremely rare, it could add up to a lot of wage theft in the aggregate.

Have your hours ever been modified in this way? You may not know. Many of the software programs were generally not set up to notify employees when supervisors make changes to their timecards.

Employees should know what happens to their hours

The status quo – in which software is used to alter employee hours in numerous ways without their knowledge – hurts everyone. Employees lose out on earned wages. Employers may benefit in the short term but they also risk big wage and hour lawsuits when small problems aren’t detected early.

It need not be this way. A few of the programs we reviewed were structured to involve employees in any managerial edits to their timecards. Other software programs offered “add-on” features providing meaningful notification to employees, but these features are apparently rarely purchased by employers.

More transparent software would satisfy the employer’s interests in efficiency while also allowing supervisors and employees to hold each other accountable for the integrity of the time records. Record-keeping rules should also be updated to reflect current realities. Employers with transparent systems should be rewarded, while bad actors punished.