Cuban migrants steps from US border hope for Trump solution 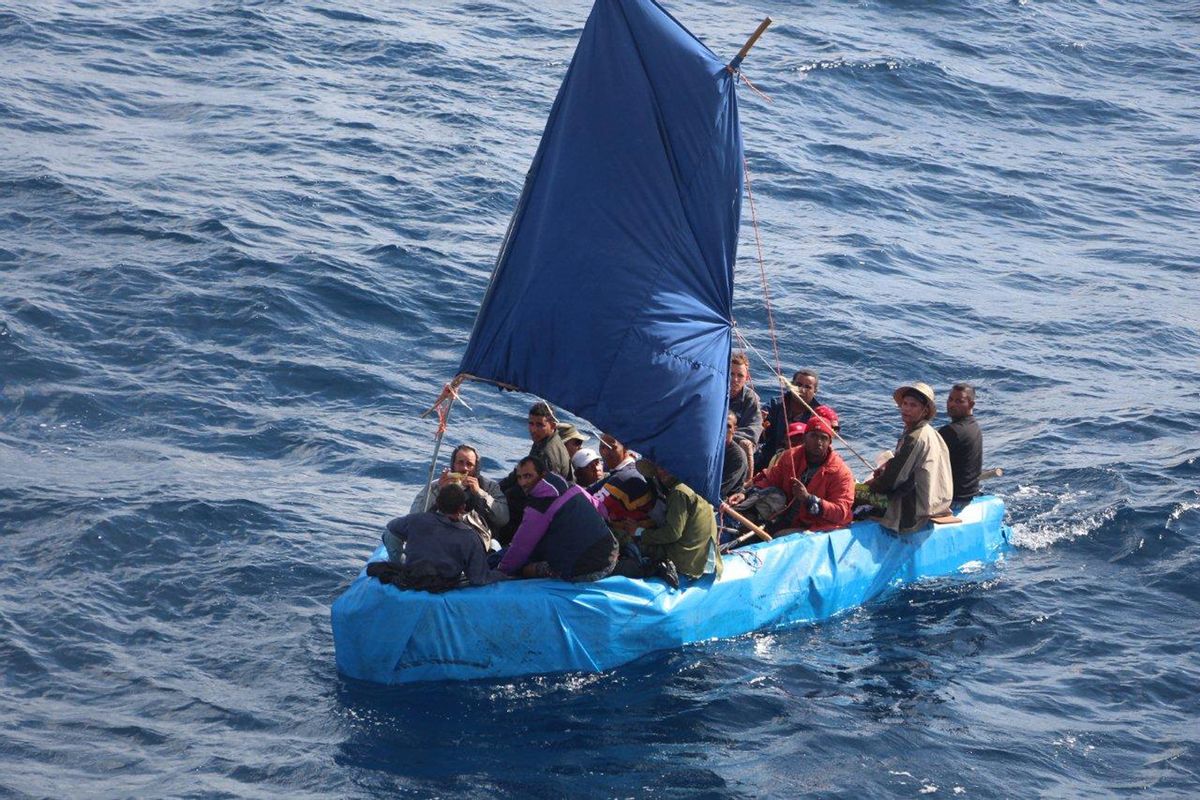 This Jan. 1, 2015 photo provided by the U.S. Coast Guard shows 24 Cuban migrants in the waters south of Key West, Fla. The Cubans were later repatriated. Coast Guard officials said Monday, Jan. 5, 2015, that the number of Cubans attempting to reach Florida illegally by sea has surged since the U.S. and Cuba announced they would restore diplomatic relations. (AP Photo/U.S. Coast Guard) (AP)
--

CIUDAD VICTORIA, Mexico — Dozens of Cuban immigrants remained stranded in Nuevo Laredo across the border from Texas on Saturday, uncertain what would happen following Washington's decision to end their privileged immigration access this week.

Some waited near the mid-point of the bridge over the Rio Grande. Others looked for food and shelter in Nuevo Laredo, determined to wait until President-elect Donald Trump is inaugurated next Friday with the hope that he will reverse President Barack Obama's decision to end the so-called "wet foot, dry foot" policy that had given Cuban immigrants special access to the country.

"There's nothing else but to wait to see what happens, staying in Mexico would be the last option because our goal was to get to the United States," said Irina Ricardo Martinez, who travelled for two months after departing Cuba for Ecuador with her husband. "To wait until the 20th (inauguration) until Trump comes in to see what happens, I think that he's going to change the law."

Since December 2014, when Obama announced a new detente with Cuba, an estimated 100,000 Cubans have left the island fearing their privileged access to the U.S. might end. Many of those flew to South American countries and embarked on an overland odyssey to the Mexico-U.S. border.

Thursday's announcement of the end of the "wet foot, dry foot" policy left some stranded thousands of miles away and others just feet.

Kenia Torres Gerarde, a Cuban dermatologist, said she had travelled for two months, starting in Guyana, to reach the U.S. border. She arrived Thursday afternoon and said U.S. border officials gave her a paper and told her to return at 9 a.m. Friday for processing.

"And when we were there at 6 a.m. they took the paper and threw us out," she said, adding that she planned to wait in Mexico for a solution.

Before Thursday's announcement, Cubans could generally present themselves at the port of entry and be released into the United States where they could reside for one year and then apply for lawful permanent residency.

"From now on Cuban nationals will be treated like any other migrants who present themselves at the border," Department of Homeland Security acting press secretary Gillian Christensen said in an email Saturday. "Like nationals from other countries, Cubans in the United States can seek asylum and other available forms of relief or protection from removal."

They must go through a "credible fear" process that analyzes whether they face a credible threat of persecution in Cuba.

During that process, they will generally be held in immigration detention for potentially months and success is far from guaranteed. It can take years for asylum to be granted, but after one year paroled in the country they could apply for legal residency under the Cuban Adjustment Act.

Miami immigration attorney Alfonso Oviedo Reyes said Cubans will have to go the asylum route like any other immigrant arriving at the U.S. border.

"It's going to be an uphill climb for them," Oviedo Reyes said. "They will be detained and put in prison ... They will be processed like everybody else. The party is over."