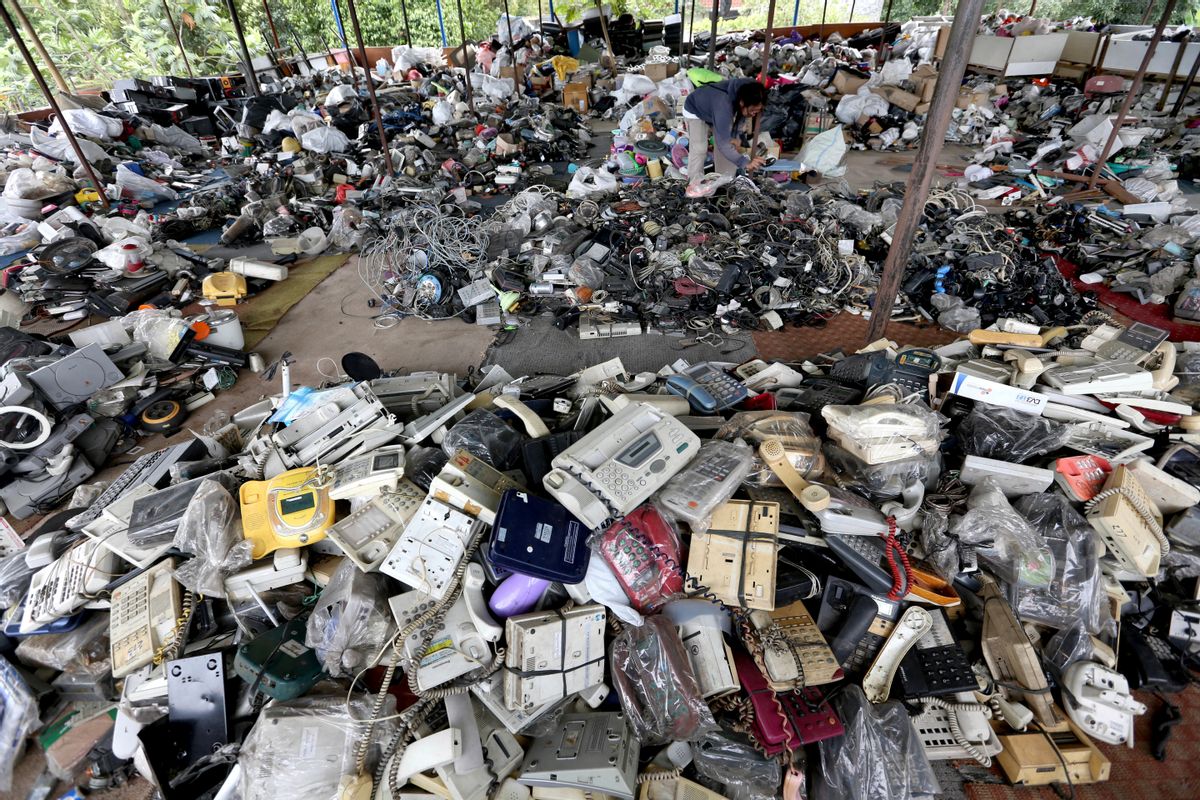 In this Friday, Jan. 13, 2017 photo, a customer browses through used items at a flea market on the outskirts of Jakarta, Indonesia. The waste from discarded electronic gadgets and electrical appliances has increased by two-thirds in East Asia over five years, posing a growing threat to health and the environment unless proper disposal becomes the norm. The United Nations University says China is the biggest culprit with its electronic waste more than doubling. (AP Photo/Tatan Syuflana) (AP)
--

JAKARTA, Indonesia — The waste from discarded electronic gadgets and electrical appliances has reached severe levels in East Asia, posing a growing threat to health and the environment unless safe disposal becomes the norm.

China was the biggest culprit with its electronic waste more than doubling, according to a new study by the United Nations University. But nearly every country in the region had massive increases between 2010 and 2015, including those least equipped to deal with the growing mountain of discarded smartphones, computers, TVs, air conditioners and other goods.

On average, electronic waste in the 12 countries in the study had increased by nearly two thirds in the five years, totaling 12.3 million tons in 2015 alone.

Rising incomes in Asia, burgeoning populations of young adults, rapid obsolescence of products due to technological innovation and changes in fashion, on top of illegal global trade in waste, are among factors driving the increases.

"Consumers in Asia now replace their gadgets more frequently. In addition, many products are designed for low cost production, but not necessarily repair, refurbishment or easy recycling," said the study. It urges governments to enact specific laws for management of electronic waste or rigorously enforce existing legislation.

Only South Korea, Taiwan and Japan have long established recycling systems based on laws introduced in the 1990s. Open dumping of lead- and mercury-laden components, open burning of plastics to release encased copper and unsafe backyard operations to extract precious metals are the norm in most countries including Indonesia, Thailand and Cambodia, which also lack laws governing the treatment of electronic and electrical waste.

The study said open burning and unsafe recycling is associated with a slew of health problems for workers and communities near recycling operations They include infertility, childhood development problems, impaired lung function, liver and kidney damage, inheritable genetic damage and mental health problems.

Backyard recyclers are after gold, silver, palladium and copper, mainly from printed circuit boards, but the crude acid bath extraction process releases toxic fumes and is also inefficient, recovering only a portion of the valuable material.

Asia as a whole is the biggest market for electronics and appliances, accounting for nearly half of global sales by volume, and produces the most waste.

Guiyu, a heavily-polluted rural town in China that specializes in dismantling consumer electronics, some of it exported from rich countries, has become synonymous with the costs of a throwaway high-tech world.

China has cleaned up Guiyu and other centers like it but the Basel Action Network, which brought Guiyu to international attention, said most of the dangerous practices continue in Guiyu albeit concentrated within a new industrial park on its outskirts.

Ruediger Kuehr, one of the study's authors, said the amount of waste being generated is higher than governments estimate, partly because of their narrower definitions, and should be a wake-up call to policymakers and consumers.

"We are all benefiting from the luxury of these electrical and electronic products to a certain extent, it makes our lives easier, sometimes more complicated," he said. "However if we want to continue like this we must be reusing the resources contained in electronic and electrical equipment."

A smartphone, for example, uses more than half the elements in the periodic table, some of which are very rare, and in the longer-run will be exhausted without recycling, said Kuehr.

Stephen Wright was educated at the U.S. Army Intelligence School and the Iowa Writers Workshop. He has taught at Princeton University, Brown University, and, most recently, The New School. He lives in New York City.