I was the kid at the pro-life rally: My long road to understanding "my body, my choice"

Everywhere I looked, I was bombarded with images of death. It took me years to hear what the other side was saying 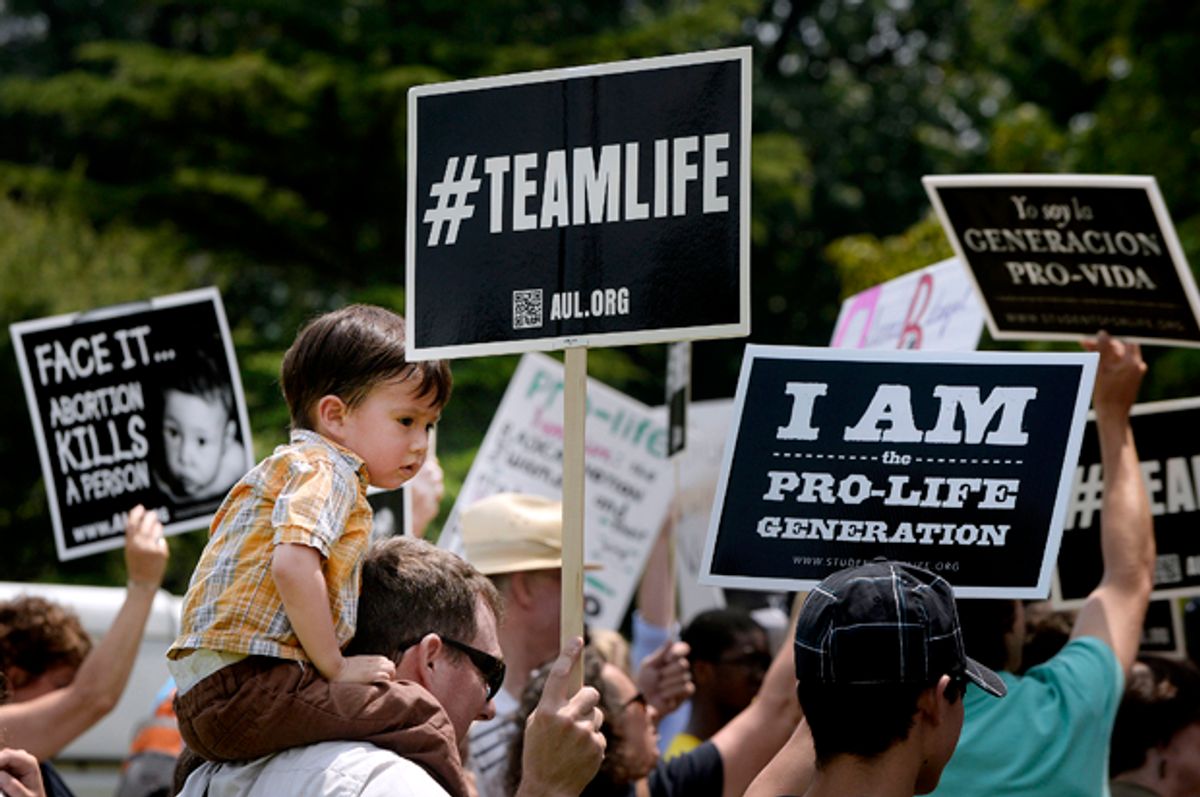 I wasn’t the only kid standing in the rain outside of the Washington State capitol building during the annual pro-life rally. Yellow school buses crammed with elementary school students from the nearby — and not so nearby — private Christian schools lined the streets, making it nearly impossible to find a parking place. And there were other homeschooled kids like me. I don’t know how the other kids felt as we marched around the capitol grounds and listened to politicians and faith leaders address the crowd, but I mostly just felt scared.

A speaker at the rally said Roe v. Wade had been "the beginning of the American Holocaust" that we were now actively fighting. As I listened, I stared at the muddy grass that was slowly swallowing my sneakers to avoid looking at the signs held by the pro-life protesters standing around me. I'd had nightmares about those signs before. Their lettering screamed about babies being murdered, accompanied by graphic and bloody pictures. Just looking at them made me feel like my stomach was starting to show off its latest acrobatic tricks.

From just across the way, the usual counter-protestors began chanting: "Keep your laws off my body! Keep your laws off my body!" They were the pro-choicers. The feminists. They waved their signs with pictures of coat hangers and the words "Never again!" that included the mortality rates of women who had back-alley abortions. Once, when I was very little, I'd grabbed Mom's arm in panic, whispering, "Can they get to us?" She'd said we were safe, but even if things weren't about to erupt into a brawl I still felt like I was caught in the middle of a war zone. Everywhere I looked, I was bombarded with death tolls and grisly photographs. I tried to keep my eyes locked on my feet.

When it comes to abortion, both sides rarely speak the same language, and this is especially true at pro-life rallies. I doubt the pro-life signs my mother and the other adults carried did anything to persuade the counter-protesters. And as far as I was concerned, the pro-choice signs may as well have been written in ancient hieroglyphics. “Keep your laws off my body!” and “My body, my choice!” meant nothing to me.

In my paradigm, the theological was personal. To quote a Bible verse I had to memorize as a preteen: “You are not your own; you were bought at a price. Therefore honor God with your bodies.” My body didn't belong to me. In fact, it seemed to belong to everyone except me — God, my future husband, and even my father, who was charged with protecting my purity. My body belonged to men.

Long before my peers had begun complaining about their unrequited crushes, let alone their lack of a sex life, I'd been informed how I was going to be handling my sexuality and my body. Sex was so out of the question that my parents and the pastors at my church made it crystal clear that I wouldn't even be dating unless there was the potential for marriage. They feared that the combination of teenage hormones and a little romantic moonlight would spell a fatal end for my virginity.

The most common metaphor I heard for my body while growing up was that it was like a gift wrapped in pretty paper with Future Husband's name written in big, bold lettering on the card. You don't open other people's presents; that's just bad manners. And my virginity, I was told, was the ultimate gift. Under no circumstances would there be any premarital sexy times in my future, no matter how old I was when I got married (or if I even got married at all). Having sex outside of wedlock would be like giving away a present that wasn't mine to give, leaving me with nothing to give my future husband.

It wouldn't have ultimately mattered, but I almost wish that the pro-choice signs I saw as a kid would've had a message directed at me: "You own your body." I couldn't begin to understand "My body, my choice" because I didn’t know anyone owned their body, least of all me. If I had been able to comprehend that I had autonomy over my body, it would've naturally followed that so did everyone else. But when even something as private as masturbation was banned because it would diminish the value of God and Future Husband's property, it was impossible for me to comprehend the idea of anyone being able to exercise personal choice when it came to abortion.

Ironically, it wasn’t until right before I got married and Mom began telling me which forms of contraception were pro-life approved that “My body, my choice” began to feel personal. It began to make sense in a way it never had before. As Mom detailed which forms of birth control I could ask the doctor for, and which ones I couldn't, I realized I'd never been given a choice when it came to my body. "This is between me and my doctor," I wanted to say. My inner monologue began mirroring the pro-choice chants I'd heard as a kid. "Keep your [theology] off my body!" I wanted to yell. "My body, my choice!" What allowed me to finally understand the slogans that were getting lost in translation was when I finally realized that they applied to me.

It took years for me to realize that the pro-choice women protesters I saw weren’t only talking about themselves; they were talking about me, too. What they believed was such a basic fact it didn’t even need to be spelled out was revolutionary to me when I finally understood it: I own my body.