Nowhere left to run away to: The final days of the circus

With revenues at an all time low and out of options, Ringling Brothers decides to shut its Big Top down in May 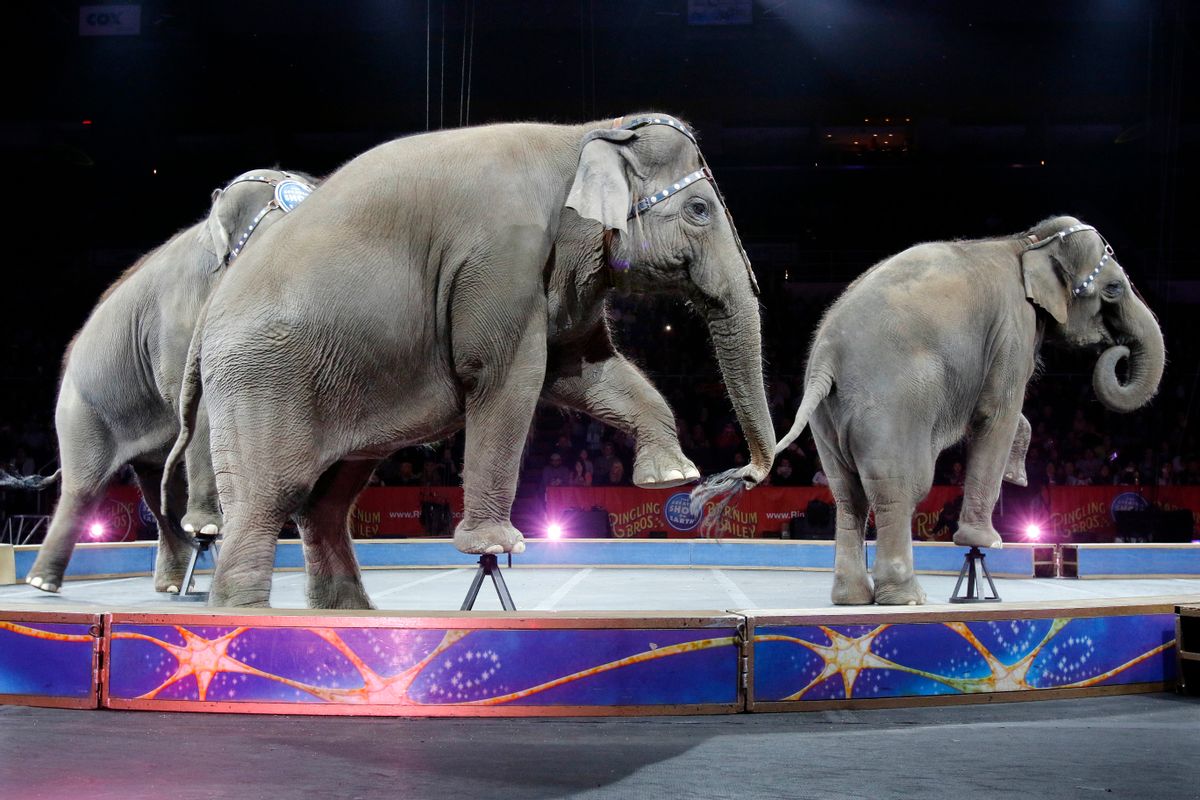 FILE - In this May 1, 2016 file photo, Asian elephants perform for the final time in the Ringling Bros. and Barnum & Bailey Circus in Providence, R.I. The Ringling Bros. and Barnum & Bailey Circus will end "The Greatest Show on Earth" in May 2017, following a 146-year run. Declining attendance combined with high operating costs, along with changing public tastes and prolonged battles with animal rights groups all contributed to its demise. (AP Photo/Bill Sikes, File) (AP)
--

SARASOTA, Fla. (AP) — Goodbye to death-defying feats — daring young men (and women) on the flying trapeze, whip-wielding lion tamers, human cannonballs. Goodbye to the scent of peanuts and popcorn, the thrill of three rings, the jaunty bum-bum-dadadada of circus music.

Send out the clowns. The Big Top is coming down — for good.

On Saturday, officials of the company that owns the Ringling Bros. and Barnum & Bailey Circus announced that it will close in May, ending a 146-year run that dates back to a time before automobiles or airplanes or movies, when Ulysses S. Grant was president and minstrel shows were popular entertainment.

What killed the circus? There are many suspects: increased railroad costs. Costly court battles with animal rights activists that led to an end to elephant acts — and the fact that some people didn't want to see a show without elephants.

But mostly, in an era of Pokemon Go, online role playing games and YouTube celebrities, the "Greatest Show on Earth" doesn't seem so great.

For a long time, the circus was more than relevant — it was the stuff that dreams were made of.

The first circuses were created in Europe; the American twist would be canvas tents that allowed mobile troupes to go to the far-flung audiences of the 19th century.

Phineas Taylor Barnum's traveling menagerie was wildly popular, while the five Ringling brothers performed juggling acts and skits in Wisconsin. Eventually, Barnum, the Ringlings and another performance-minded businessman named James Bailey pooled their resources and knowledge. Some of the early performances were merely zoos on wheels and a few human oddities, but over time, the acts became truly spectacular — attractions like Jumbo, touted as the world's largest elephant.

Sprawling companies traveled around America by train, wowing audiences with the sheer scale of entertainment and exotic animals. Deborah Walk, assistant director of legacy and circus at The Ringling — circus impresario John Ringling's mansion, art and circus collection in Sarasota — said that the circus' impact on small town America is often overlooked.

"That wonderful show that you can see in Madison Square Garden crisscrossed the country and ended up in San Francisco. And every place in between saw the same thing," she said.

"In the 1880s, especially, here you had this huge colossal canvas city that tracked across the country. It brought the wonders of the world to your door. You didn't have to go to Africa or Asia to see the animals."

The circus also heralded societal changes, she said. Women became performers around the turn of the 20th century (although there would be no African-American or female ringmasters until 2016).

When the circus came to town, kids dreamed of running away to join it and its ever-changing roster of stars: the sad-faced clown, Emmitt Kelly; the daredevil trapeze act, the Flying Wallendas; Gunther Gabel-Williams, blond-maned and fearless in the ring with the big cats.

The circus was so important to home-front morale that President Franklin D. Roosevelt gave Ringling Bros. special permission to use the rails during World War II.

"The circus is the only ageless delight that you can buy for money," Ernest Hemingway wrote in a three-page essay for the Ringling Bros. program in 1953. "It is the only spectacle I know, that, while you watch it, gives the quality of a truly happy dream."

But as the 20th century went on, kids became less enthralled. Movies, television, video games and the internet captured young minds. The circus didn't have savvy product merchandising tie-ins or Saturday morning cartoons to shore up its image. After 1956, the circus no longer performed under tents, moving to arenas.

The public grew conflicted about animal acts. Circuses without animals — such as Cirque du Soleil — were smaller and growing in popularity.

Animal rights activists put pressure on cities where the circus toured. Los Angeles and Oakland prohibited the use of bull-hooks by elephant trainers. Asheville, North Carolina, banned wild or exotic animals from performing in the city-owned stadium.

In 2014, Feld Entertainment won $25.2 million in settlements from groups including the Humane Society of the United States, ending a 14-year legal battle over allegations that circus employees mistreated elephants.

The initial lawsuit was filed by a former Ringling barn helper who accepted at least $190,000 from animal-rights groups. The judge called him "essentially a paid plaintiff" who lacked credibility and standing to sue, and rejected the abuse claims.

Kenneth Feld testified about the elephants' importance to the show at that 2009 trial.

"The symbol of the 'Greatest Show on Earth' is the elephant, and that's what we've been known for throughout the world for more than a hundred years," he said.

Asked whether the show would be the same without elephants, Feld replied, "No, it wouldn't."

And, it wasn't. Feld Entertainment removed the elephants in 2016, sending all 40 of them to their Center for Elephant Conservation in Florida. Ticket sales plummeted. The circus, already an afterthought for many, receded further in the public mind.

Jeff and Carol Fouse of St. Louis, Missouri, toured the Ringling Circus Museum on a recent day. They saw the old-timey diorama of the circus encampments. They shuffled past the colorful, sequined ringmaster costumes and peered into the rail cars that were once filled with clowns and elephants and even a pygmy hippo.

Then they squinted into the bright Florida sunshine. "I don't even know if there is a circus anymore," said Jeff Fouse, a 63-year-old engineer, tilting his head.

The Feld family, which bought the circus in 1967, has branched out and bought and created other large-scale touring shows, such as Disney on Ice, Marvel Live and Monster Jam. Each was specialized with characters and stories, but Feld made sure that each had a bit of the circus in them, as well. It was, after all, about the show.

But the circus, itself, was dying.

The Felds said they looked at scenarios and costs. They ran numbers and tried new things — an interactive phone app, ice skaters in the show, adding motorcycle stunts — but nothing worked.

The show will go on at smaller and more specialized circuses. But come May, after almost a century and a half of spectacular revels, the Ringling Bros. and Barnum & Bailey Circus will vanish, like a big, colorful, improbably long dream.

Sixty-three years ago, in his circus program essay, Hemingway marveled at the way performers made stunts and tricks in the ring look so simple.

"It is all wonderfully easy in your dreams," he wrote.