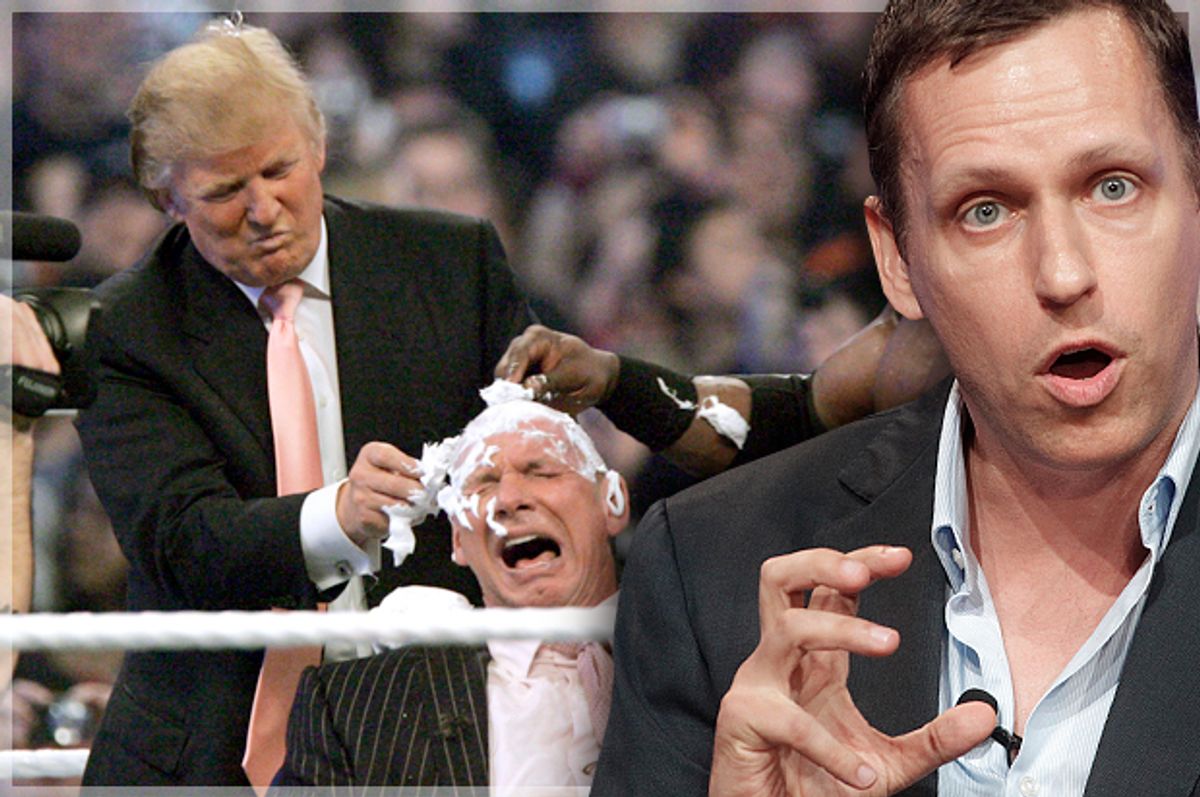 The election of Donald Trump is easy to understand, if you know where to look for answers. In a recent wide-ranging interview with the New York Times, Peter Thiel, the Trump adviser, Facebook billionaire and staunch libertarian, offered this illuminating insight:

Using two wrestling terms he learned, Mr. Thiel says that many people assumed Mr. Trump was “kayfabe” — a move that looks real but is fake. But then his campaign turned into a “shoot” — the word for an unscripted move that suddenly becomes real.

“People thought the whole Trump thing was fake, that it wasn’t going to go anywhere, that it was the most ridiculous thing imaginable, and then somehow he won, like [Hulk] Hogan did,” Mr. Thiel says. “And what I wonder is, whether maybe pro wrestling is one of the most real things we have in our society and what’s really disturbing is that the other stuff is much more fake. And whatever the superficialities of Mr. Trump might be, he was more authentic than the other politicians. He sort of talked in a way like ordinary people talk. It was not sort of this Orwellian newspeak jargon that so many of the candidates use. So he was sort of real. He actually wanted to win.”

It is clear that Donald Trump is a political performance artist whose shtick is borrowed from professional wrestling. This is an observation I have repeatedly made about Donald Trump here and elsewhere for more than a year. It has also become a truism of sorts that has appeared -- often without attribution or mention -- in many other places both online and in print.

To reiterate: Professional wrestling is a type of scripted storytelling that uses athleticism and dramatis personæ to tell classic stories that draw upon basic archetypes that could easily be found in Shakespeare or ancient Greek mythology. In the struggle between good and evil, right and wrong, and the moral complexities of the modern antihero, Donald Trump (in the language of professional wrestling) is a "heel" or villain. In keeping with that role, Trump has shown a flagrant disregard for the truth, pretends to be a victim when in fact he is the aggressor, is a bully, lords his wealth over others, cheats and has little regard for the rules. Trump's version of the heel professional wrestler is also a bellicose, verbally dexterous womanizer and misogynist. In professional wrestling, the secret to success is often described as "being yourself with the volume turned way up." Donald Trump has taken this maxim to the extreme. There appears to be little to no difference between Donald Trump the real person and Donald Trump the public persona and pro-wrestling-inspired politician.

Donald Trump's embrace of professional wrestling's aesthetics served him well during the 2016 presidential campaign. He cut mean-spirited "promos" on his Republican rivals that exposed their weaknesses and eventually drove them out of the presidential race.

Trump's insistent lying as well as his larger-than-life personality allowed him to outmaneuver the American news media in at least two ways.

The media surrendered to Trump, giving him at least $3 billion worth of free coverage, because he made for compelling television. The media was also neutered by Donald Trump. Its supposed journalistic standards of balance and neutrality were ill-equipped to deal with a presidential candidate who learned from reality TV and professional wrestling that the way to win is to always keep the camera focused on him.

But Donald Trump's professional wrestling heel persona is also quite limiting. His bullying behavior, arrogance, crudeness and desperate desire to humiliate his enemies are traits and behaviors ill-suited for the presidency. Success in professional wrestling is often defined by being loud and grand, using big movements to command attention, filling up both the ring and the TV camera's frame with one's personality and physical presence. By comparison, a successful president should be precise, direct, diplomatic and calm.

Trump's much-anticipated press conference last Tuesday also demonstrated the limits of professional wrestling as a playbook for American presidential politics. It featured all the trappings of a pro wrestling event: Mike Pence acted as Trump's manager and one of his opening acts; Trump insulted CNN as "fake news" and mocked BuzzFeed as "garbage"; there were Trump allies in the audience who cheered on cue; and there were huge stacks of manila file folders overflowing with blank pieces of paper (in professional wrestling such a prop is a called a "gimmick") that were supposed to be Donald Trump's agreements to recuse himself from his many businesses while serving as president.

But the spectacle of Trump's first press conference could not mask how he is criminally underprepared for the responsibilities of the office, amazingly ignorant about basic public policy matters, ill-tempered, mired in corruption scandals, likely compromised by a foreign power that desires to manipulate him, and grossly incompetent. In many ways, Donald Trump is like a much-heralded and anticipated professional wrestler who is new to an organization but in reality cannot perform in the ring. He is all looks and talk, but possesses no substance or real skill.

Donald Trump is Handsome Jimmy "the Boogie Woogie Man" Valiant, without the charisma or language skills.

Donald Trump is "Ravishing" Rick Rude, without the body.

Donald Trump is Bobby "The Brain" Heenan, without either the quick wit or the intelligence.

Donald Trump is Nikolai Volkoff, without the Russian accent.

Donald Trump is "The Million Dollar Man" Ted DiBiase, without a fraction of the ring prowess -- although Ben Carson would make a fair substitute for DiBiase's manservant, Virgil.

What of Donald Trump's fans?

They are "marks." In the parlance of professional wrestling, this is one of the greatest insults. Trump's voters do not know the difference between the real (a "shoot") and the theatrical ("kayfabe" or "a work"). Trump's marks wanted him to "drain the swamp" and to stand up for "real Americans" like them, but in reality he is a self-interested plutocrat whose policies will actually punish the angry "white working-class" voters who installed him in office. Perhaps even more pathetic, many of Trump's voters know that he is lying to them but continue to support him anyway, because their heel champion has promised to hurt Muslims, immigrants, gays and lesbians, poor people, women, African-Americans and other people of color.

Unfortunately, this is not an episode of "WWE Raw," "Ring of Honor," or "New Japan Pro-Wrestling." Donald Trump, a professional wrestler wannabe who believes that his character is real, will soon be president of the United States. There will be no last-minute rewrites of the script, or "run-ins," where another wrestler comes from out of the audience, hits Trump over the head with a chair and steals away the championship belt. With the ascendance of this real-life fascist authoritarian, American politics has fully become professional wrestling. We should all be terrified.