Across the bay from San Francisco is Richmond, a working-class company town where Chevron looms large 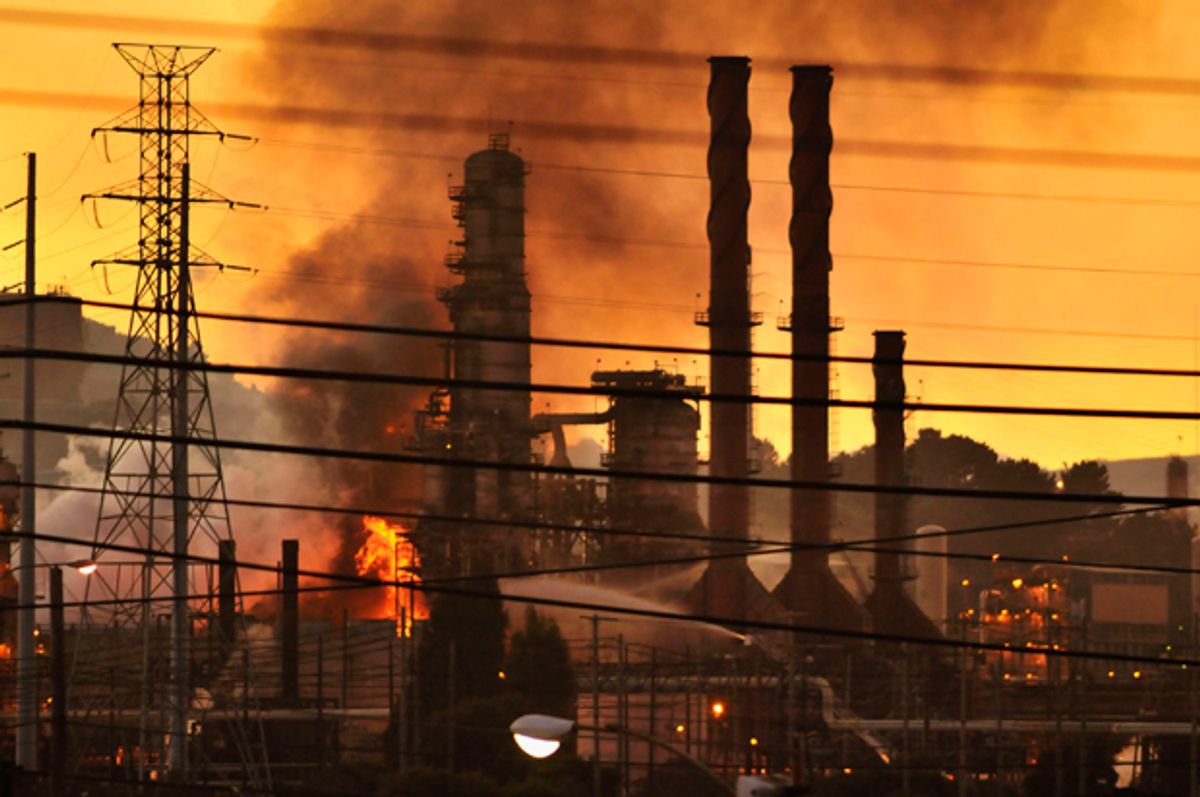 A fire at the Chevron oil refinery in in Richmond, California August 6, 2012. (Reuters/Josh Edelson)
--

As recent home buyers in Richmond, my wife and I were not yet focused on Chevron’s historic intertwining with our new hometown. We acquired a surprisingly affordable home, just over the hill from a century-old refinery. The seller was a Chevron engineer headed for retirement in a San Diego condo. We noticed a disclaimer or two about our proximity to his former employer, but this legal notification was carefully buried in a big pile of standardized real estate agent and mortgage company paperwork that included a lot of other fine print.

Like starry-eyed California gold seekers in the nineteenth century, our gaze was distracted from any possible downside to leaving stodgy old New England after thirty-two Boston-area winters. As our realtor joked, we were about to become residents of “the Richmond Riviera.” It had such a sunny, temperate Mediterranean-style microclimate that no one ever complained about anything—except possibly a neighbor with building plans that might obstruct a waterfront vista. Our own view of downtown San Francisco and Marin County landmarks like Mount Tamalpais was simply breathtaking.

The only major piece of Chevron Corporation property visible between us and much pricier Marin was a 4,200-foot pier extending out into the sparkling waters of San Francisco Bay. The 600-ton oil tankers unloading there, with their pumps humming away quietly, were often quite beautiful at night. Their illuminated superstructures made them look like carnival rides or a circus that had sailed into port from the Pacific, via the Golden Gate, whose famous bridge glittered farther off in the distance, between Angel Island and the Marin peninsula known as Tiburon.

On a bright, sunny August afternoon, six months after moving in, my wife was outside, tending to our new garden. A concerned neighbor across the street spotted her among the plants, opened her front door, and shouted: “You shouldn’t be outside! Don’t know you know there’s a ‘shelter in place’?”

“What’s that?” Suzanne asked. She soon found out by looking up and over the hill behind our house, where an eruption worthy of Mount Vesuvius was underway. A major pipe rupture and fire had occurred at the Chevron refinery. Nineteen workers—the first responders to this emergency— narrowly escaped death at the scene of the accident. As the conflagration continued, a towering plume of toxic smoke spiraled up and then over much of downwind Richmond, reaching several other East Bay communities as well.

For Richmond mayor Gayle McLaughlin, August 6, 2012, was turning out to be the day she and other local Greens had long warned about. Sitting down for dinner at her modest rental home a few miles away from Chevron, sixty-one-year-old McLaughlin started to get panicked calls from residents reporting that a huge dark cloud was hovering over them. Richmond police chief Chris Magnus soon confirmed the accident location, as did company officials calling from the scene of the fire.

In Richmond, when fossil fuel disaster strikes, city hall issues an official order directing everyone affected to take cover in their own homes, a self-help procedure known as “sheltering in place.” Doors must be closed and windows taped shut, if possible. Under the ranking system used by Contra Costa County to calibrate its response to refinery emergencies, the Chevron fire was judged to be a Level 3 incident, the highest level of danger. Unfortunately, the county’s warning system did not quickly share this bad news. Robocalls to eighteen thousand nearby residents took many hours to complete, due to outdated software.

Many area residents decided that “sheltering in place” wasn’t working well enough for them and headed for the nearest emergency room or clinic instead. About fifteen thousand sought medical treatment for respiratory complaints and other problems in the wake of the fire. Locking our doors and leaving gardening tools behind, my wife and I jumped into the car and sought refuge with friends in nearby Berkeley. That well-known university town, in neighboring Alameda County, had higher home prices and more distant bay views but fewer industrial neighbors like Chevron.

The 2012 fire was not the first refinery accident to occur locally or in other parts of the globe where Chevron operates. But its dramatic scale, negative health effects, and adverse economic impact made it a modern milestone in Richmond’s often-fraught relationship with its biggest employer. The fire caused a $1.86 billion drop in the city’s assessed property values, reducing tax revenues from Chevron itself, other businesses, and homeowners. It revived long-standing concerns about Chevron’s environmental impact and workplace conditions. It stirred new restiveness about job safety among refinery workers whose union had waged a nearly hundred-year struggle for greater autonomy from the company. And, as Chevron spent heavily on public relations damage control, Richmond residents were subjected to many post-fire reminders of the company’s historical dominance of local affairs.

As a forty-year veteran of labor and political organizing, I should have expected that a company with robber baron roots might have tangled with its own workers or downwind neighbors a few times before. Upon closer inspection, I learned that for much of the twentieth century, Richmond refinery bosses and lobbyists were skillful at winning local hearts and minds. To achieve its business goals, Chevron (formerly Standard Oil of California) has employed more than a century’s worth of corporate paternalism, targeted philanthropy, slick publicity, and political patronage. During some past labor conflicts, a little picket-line repression was helpful too. The company’s modern-day game plan reflected the same sophisticated multifaceted approach it has used for decades.

When Standard Oil opened for business in 1905, present-day Richmond consisted of grain fields, cattle farms, and a duck-hunting marsh adjacent to its low range of knolls rising from the bay. As California historian Gray Brechin notes, “Ohlone Indians once found the place so rich in food that they had, over thousands of years, built a gigantic pile of clam and mussel shells at the mouth of a creek there.” The Ohlones were long gone by 1900 when the Atchison, Topeka, and Santa Fe Railroad arrived. Its workers built a tunnel and laid track to Ferry Point, making Richmond the site of San Francisco Bay’s second transcontinental railhead.

In 1912, the San Francisco chamber of commerce sent a delegation across the bay, by ferry, to check out business opportunities in what Richmond’s founders hoped would become “the Pittsburgh of the West.” Their “trade excursion” took them to the highest point along the city’s thirty-two miles of still undeveloped shoreline. Looking east, they could admire not only one of the biggest refineries in the world but “the great car shops of Pullman, the Enterprise foundry, the plant of the Western Pipe and Steel Company of California . . . and other industrial concerns that have found cheap fuel, light and power, convenient transportation, and other favorable conditions.”

Within a few years, Richmond’s population neared ten thousand. Its roster of brand-name companies included American Radiator, Standard Sanitary, Stauffer Chemical, and the California Wine Association, which for a time operated the biggest winery and storage plant in the world on Richmond’s Point Molate. As Brechin points out, living downwind from so much manufacturing and refining was already becoming a problem for residents of West Contra Costa County and beyond because “the prevailing winds through the Golden Gate drove the smoke, ashes, and dust rich in heavy metals and asbestos, along with the stench of petrochemicals and acids, back upon the town.”

Among Richmond’s nascent hazards was the little matter of explosions—and not just those occurring at Standard Oil. Forced out of San Francisco and Berkeley because of local concerns about the safety of its dynamite making, the Giant Powder Company relocated to Richmond’s Point Pinole. Between 1880 and 1960, two billion pounds’ worth of explosives were manufactured there, within the city limits. “This was the dynamite that helped build the west,” explains Point Pinole park ranger Dave Zuckerman, when he conducts tours of the 2,300-acre site today. “We like to say it was a ‘booming business.’”

Leading the industrial transformation of Richmond, Standard Oil started out small, on just six hundred acres, making kerosene for export to Asia. Soon there was no bigger refinery in the state and only two larger ones in the entire world. The facility was supplied by a 283-mile pipeline pumping crude to Richmond from the oil fields of Bakersfield, California, directly to the East Bay. Over time, oil pipelines, processing units, and storage tanks spread out over three thousand acres overlooking the San Francisco and San Pablo Bays. Processing capacity today is 240,000 barrels of crude daily, which can generate as much as $25 billion in sales, 10 percent of the company’s worldwide total in recent years. The company now operates in 180 countries and is ranked sixteenth on Fortune’s Global 500 list. In 2014 it was number three on Fortune’s list of the five hundred top U.S. corporations.

Excerpted Refinery Town: Big Oil, Big Money, and the Remaking of an American City by Steve Early, with  a Foreword by Senator Bernie Sanders (Beacon Press, 2017). Reprinted with Permission from Beacon Press.