The alt-right eats its own: Neo-Nazi podcaster "Mike Enoch" quits after doxxers reveal his wife is Jewish

Bad day for the Fourth Reich: Founder of popular alt-right blog The Right Stuff resigns after foes expose him 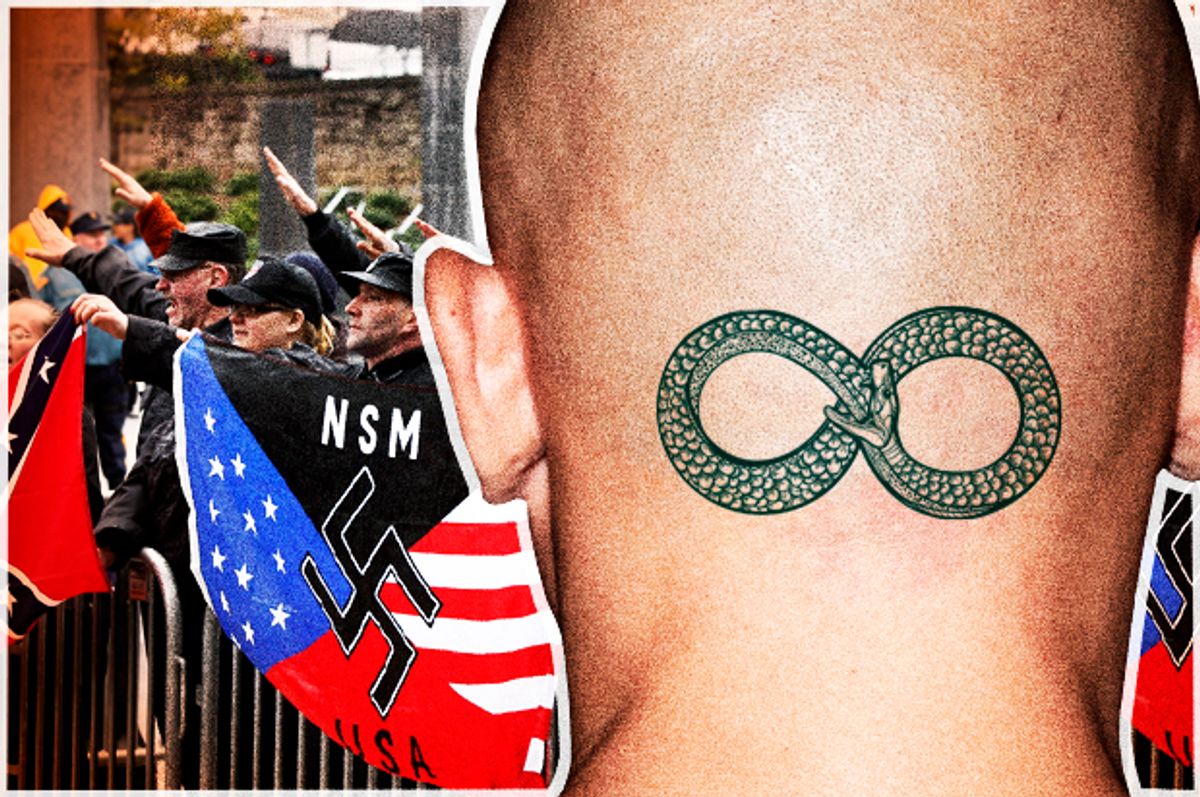 Donald Trump hasn’t even taken office yet, but the racist alt-right movement that has latched onto him is already showing signs that it’s falling apart.

The loosely knit group was shocked to the core Saturday night when one of its most influential leaders -- a man known to his online followers as "Mike Enoch," a virulent racist and anti-Semite -- was revealed to be a New York website developer named Mike Peinovich, who has said that his wife is Jewish.

Enoch/Peinovich is the creator of the popular neo-Nazi website The Right Stuff (TRS). For several years, he has also co-hosted a podcast called “The Daily Shoah,” a deliberately offensive pun on the Hebrew term for the Holocaust.

In his online persona, Peinovich routinely cracked jokes about killing Jewish people and forcibly deporting Muslims and people of African descent. The weekly program had roughly 100,000 regular listeners, many of whom regularly sent in financial donations by PayPal or bought merchandise from the site.

Peinovich's wife appears to have been aware of the entire situation. She even appeared on "The Daily Shoah" several times, including a special holiday-season segment in 2015 where she read a neo-Nazi parody of "The Night Before Christmas." Introducing the clip, which can be found online, Peinovich said his wife was "very proud of it."

Peinovich’s doxxing --- a term referring to revealing someone’s private information online --- was largely the work of anonymous left-wing users on the Medium blog site, in a post that has since been deleted. Word spread like wildfire throughout the alt-right’s many web forums and message boards over the weekend, as TRS fans and detractors battled over whether the information was legitimate or not.

That initial report had an air of credibility, since the identities of Peinovich’s fellow “death panelists” on the podcast had been revealed earlier in the week. That doxxing was done by anti-fascist activists who call themselves "antifas" and also members of a rival far right website called 8chan, who attacked TRS for supporting the principle that non-Jewish white nationalists had common interests with extreme right-wing Israelis, which is anathema to hardcore neo-Nazis and anti-Semites.

The first of Peinovich’s colleagues who was doxxed was a University of Nebraska philosophy student who called himself “Ghoul." His information was leaked out by antifas; 8channers subsequently revealed that his mother was revealed to be married to another woman.

After that, 8channers and and antifas doxxed the rest of the “Daily Shoah” crew. “Bulbasaur” was exposed as a corrections officer living in Tennessee and “Seventh Son” was revealed as a guitarist in a New York-based rock band.

The big prize for the doxxers, however, was Peinovich. As the creator of TRS, he was (at least until this weekend) regarded as one of the three most influential figures in the alt-right, alongside Daily Stormer creator Andrew Anglin and Richard Spencer, the co-creator of the "alt-right" label.

Though TRS has not received as much coverage in the mainstream press, it originated or popularized many alt-right pranks and memes, including the practice of identifying Jewish people or those suspected of being Jewish with (((triple sets of parentheses))), bogus White Student Union schemes at educational institutions, and racist or anti-Semitic song parodies. Peinovich has also claimed he was the first person to give a Nazi salute at the infamous National Policy Institute conference after Trump's election in November.

Peinovich’s downfall was set in motion in December when a former alt-right vlogger named Mike Cernovich hinted to his viewers that one of his rivals “is morbidly obese and is married to a Jewish woman.” He declined to say who he meant, but that salacious rumor set the cyber-sleuths to their task.

As the doxxing unfolded this weekend, Peinovich said nothing on Twitter or on his own site. Contacted via email by Salon, he denied being Mike Enoch but admitted to having been involved with TRS.

“I was involved with that site years ago, writing a few libertarian articles for them and using my PayPal for the exactly zero donations that the site ever got when it was still a libertarian blog,” he wrote.

Peinovich then claimed he had disassociated himself from TRS after it became overtly pro-Nazi: “I cut off ties when they went the direction they are going now, and that was 4 years ago. Honestly I have not thought much about them. As you can see from all public writings I am libertarian. My wife is Jewish. Do you really believe that I am this person?”

The TRS creator then asked Salon to help him deny that he was Enoch: “If you give any fucks at all then you could print that this is all bullshit. We are now being harassed not only by communists but by actual neo nazis.”

When asked if he would be willing to conduct a telephone interview, Peinovich replied, “Let me talk to my wife.” He never answered back.

As the evidence continued to mount linking him to the Enoch identity, Peinovich decided to fess up to his devoted Nazi fans in a post for TRS’ password-protected forums, part of which read:

As I am sure you all know, I was doxxed and an ill advised attempt to fool the media about my identity led me to not talk to you people and to try to simply ride it out by being silent. This was irresponsible and a disservice to all of you. Yes my wife is who they say she is, I won't even bother denying it, I won't bother making excuses. If this makes you want to leave the movement, or to have nothing to do with TRS, then I understand.

Don't lie for me. Don't try to defend me to those attacking me. Don't jeopardize your own reputation by defending things that you don't think you can. I could try to explain my whole life for the last ten years to you but what difference at this point would it make. Life isn't perfect.

The admission sent a shock wave throughout the alt-right. The reactions began pouring in. Some listeners of “The Daily Shoah” were crestfallen. Here's just one example of the anguish:

TDS was my favorite podcast and one of the best parts of my week. Enoch's rants were both enlightening and triggering, but now I cannot listen to them the same way again. It just feels like they're just more actors in the same play being orchestrated by the Jews. Half of my gut has also thought TRS has been controlled opposition for awhile now. Although I will continue to listen to the Shoah I just don't know if I will be able to take Enoch as seriously as I used to. It's pretty bad for your WN, fourth reich, neo-nazi, facist movement when one of the head guys happens to be married to a Jew.

Within a few more hours, Peinovich’s partners announced that he was resigning from TRS entirely.

The 8channers, who pride themselves on their refusal to adopt pseudonyms (all site users post under the handle “Anonymous”) and reject the "alt-right" label in favor of "national socialist," were ecstatic.

Many began improvising some of the Holocaust memes that have been lobbed at Jewish journalists, instead featuring Peinovich and his wife. Both were depicted in gas chambers before the night was done.

Another hoped the entire alt-right movement would just disappear: “After the shitstorm is over the alt-right won’t be important enough to warrant a [discussion] thread,” he wrote. “In my opinion, they never did.”

With Peinovich gone and many TRS readers mistrustful of the “death panelists” who helped him cover up his secret, the site’s future is an open question. Its unique blend of pop-culture references and hardcore neo-Nazism will be hard to replace. By around 3:30 on Sunday morning, at least some 8channers had begun to feel a sense of regret.

"I'm going to bed but I want everyone involved with this doxxing to think about contributing something to replace TRS rather than pissing on its grave and saying that they did the right thing,” wrote one of them. “So far you have fucked up royally.”

This article has been updated to reflect the fact that anti-fascist activists were the first to expose Ghoul, not 8chan posters.