From Martin Luther King Jr. to Donald Trump: In many ways, the civil rights hero saw this coming

The painful convergence of Dr. King and President Trump should remind us that the long arc of history bends slowly 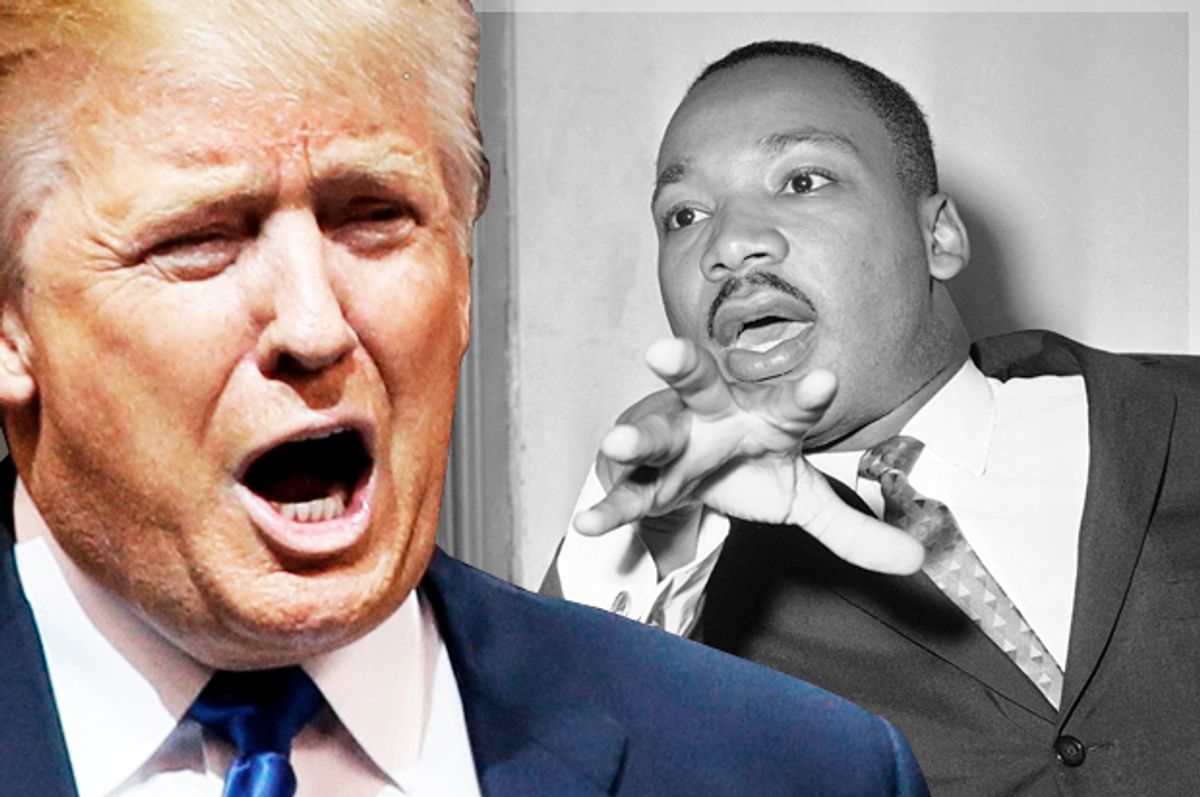 The long arc of history does not always bend toward justice.

Martin Luther King Jr. Day is a public ritual in America. To that end, King, who when alive was one of the most hated and unpopular people in the United States, is transformed into a public saint and hero.

Many parties will claim him. Global corporations will run commercials adorned with King's image for greed and profit. Television shows and sporting events will feature obligatory montages of black "celebrities" who are somehow depicted as being the fruit of King's struggle. The Democrats will summon Martin Luther King Jr. by locating him in the same lineage as President Barack Obama.

The Republicans will claim King as well. They will do this by constructing a fictionalized narrative where he was a "black conservative" instead of a democratic socialist. The Republican Party will also claim that they are the "party of Lincoln" and thus the true heirs and defenders of Martin Luther King Jr.'s legacy and the broader Civil Rights movement. Of course, this too is absurd. Such claims ignore how for at least 50 years of the racist "Southern strategy" -- culminating with the election of the American fascist Donald Trump -- the Republican Party has become a band of modern-day defenders of the Confederacy and the values of Jefferson Davis and Jim and Jane Crow.

Laughably, the Republican Party will also trot out black conservatives as part of the annual public ritual. As professional "best black friends," their main purpose is to serve as a human mask and distraction for the Republican Party and its deep affinity for racism and white supremacy.

As a featured attraction in this charade, Alveda King (Dr. King's niece) will praise the Republican Party, as she has done many times in the past (including endorsing Donald Trump), while misrepresenting her uncle's legacy. At this same moment, a letter from Dr. King's late widow, Coretta Scott King, denouncing the racism of Sen. Jeff Sessions (Trump's nominee for attorney general) has cast a shadow over the latter's confirmation hearings.

The public ritual involves selectively quoting Dr. King. Obligatory allusions to his landmark "I Have a Dream" speech will present the dream, "that one day little black boys and girls will be holding hands with little white boys and girls" as something actualized and real as opposed to an outcome that has not yet been reached in a country where the color line still negatively overdetermines the life opportunities, futures and even safety and security of black and brown people relative to whites.

The public ritual involves the castration of Martin Luther King Jr.'s radicalism. Again, the "I Have a Dream" speech will be victimized, truncated and excised to ignore its true meaning and weight. There will be few mentions of how in that speech King advocated for reparations for black Americans, and a more humane and peaceful country. By extension, the March on Washington will be used as a type of shorthand that leaves out the other necessary components of its purpose -- "for Jobs and Freedom" is apparently, even in the 21st century, too radical a proposition for many American elites and citizens.

The public ritual will also replace the Dr. King who called the United States "the greatest purveyor of violence in the world," spoke directly about white supremacy, was against militarism and imperialism, advocated for a guaranteed minimum income and had the political skills of  a master provocateur and strategist, with a smiling and eloquent black preacher who loved white folks so much that he died to save their souls through the personal sacrifice of "nonviolent" protest.

Most importantly in the age of Donald Trump, the public ritual involves ignoring King's deep cynicism about the enduring power of white racism in the United States and how it may in fact be a fixed character flaw for the country and its white citizens. King alluded to this numerous times. He believed white supremacy was "a structural part of the culture." He said, "I am sorry to have to say that the vast majority of white Americans are racists, either consciously or unconsciously," adding, "there aren't enough white persons in our country who are willing to cherish democratic principles over privilege."

This pessimism was proven correct by the election of Donald Trump. In an apparent backlash to the election of Barack Obama, the country's first black president, white conservatives and right-leaning independents have become more racially resentful, overtly racist, hostile to African-Americans and other people of color, ethnocentric and authoritarian.

Martin Luther King Jr. was not a seer possessed of superhuman abilities. He was a student of history who knew that racism is a demon in American society that had not yet been exorcised. Fifty years after his assassination this demon is still with us. There is sulfur in the air. On Inauguration Day this Friday, that demon will take the form of a trinity comprised of Donald Trump, the Republican Party, and their voters. America is haunted. For a country founded on the twin crimes of genocide against First Nations peoples and the enslavement of black people, Trump's election and coronation are in many respects not outliers but just another part of the long arc of American history.