Keep John Lewis’ name out of your mouth, Donald Trump

For a president-elect who so far is all tweets and no action, Trump's denunciation of John Lewis is especially rich 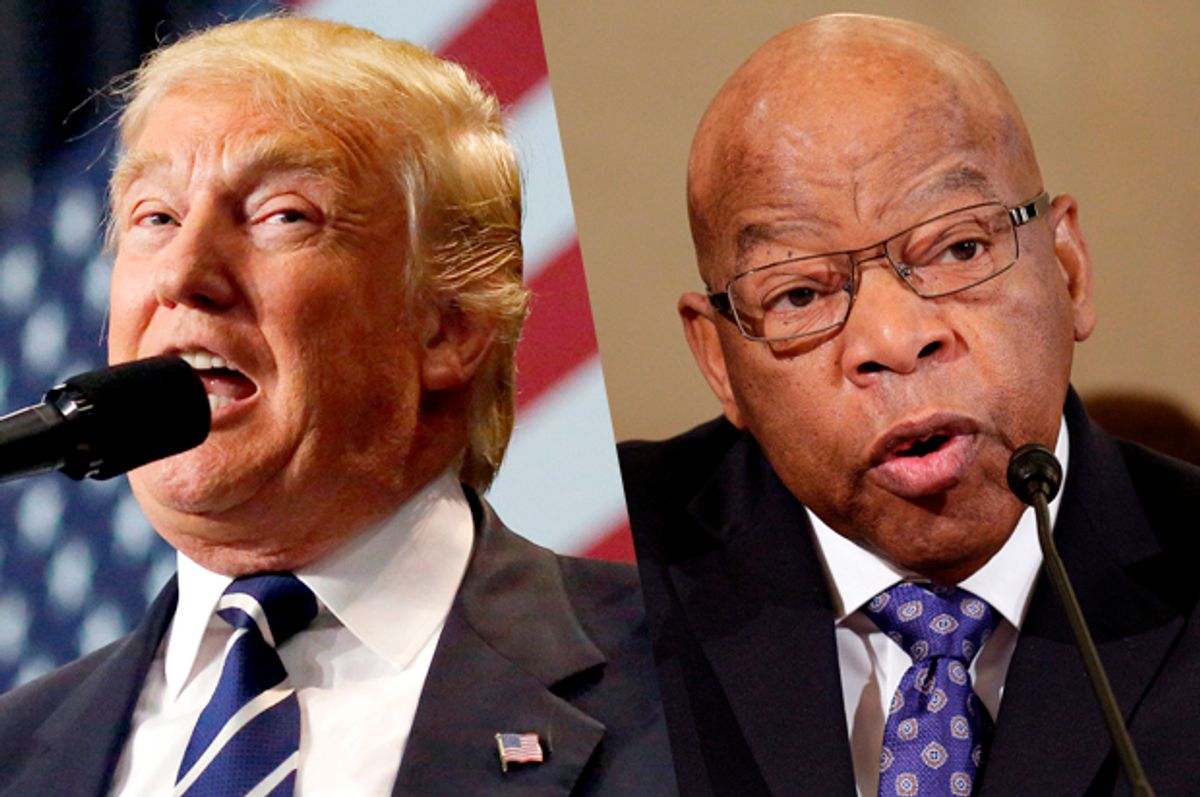 So you, me, Donald Trump, the United States of America and every other person in the world all have something in common: We know that Russia hacked our 2016 presidential election in some way. We have data, reports and statements from experts, AKA the people who create the briefings that Trump says he doesn’t need to read, and still the woven strings in Trump's toupée unfurl when another adult questions the legitimacy of his presidency.

Legendary Civil Rights leader John Lewis sat down with Chuck Todd yesterday for a "Meet the Press" exclusive interview and clearly stated, “I think the Russians participated in helping this man get elected. And they helped destroy the candidacy of Hillary Clinton.”

Trump being Trump, the president-elect took to Twitter like an 8-year-old, tweeting, “Congressman John Lewis should spend more time on fixing and helping his district, which is in horrible shape and falling apart (not to mention crime infested) rather than falsely complaining about the election results. All talk, talk, talk - no action or results. Sad!”

The only thing that’s sad (!) here is Trump's lack of respect for John Lewis — an icon, a man who nearly lost his life for freedom. How can some spoiled rich brat whose only actions involve social media and applying spray tan say anything about John Lewis? A simple Google image search delivers hundreds of photos of John Lewis in action­­: marching with Dr. Martin Luther King Jr., organizing, fighting against police brutality, standing in fellowship with people of other races and really, really making America great.

One thing that Trump should’ve considered before posting the tweet — that he wasn’t even man enough to @-tag John Lewis in — is that the reason why Lewis' district may have problems with crime or falling apart is because of people like Trump. Trump was lucky enough to be the recipient of an unearned fortune and has a history of discriminating against African-Americans, keeping them from being able to work for his companies or rent apartments in the properties that he owns. Trump's discriminatory policies were so bad the Justice Depart had to step in with a lawsuit in an effort to protect basic rights for black citizens. And of course, Trump being Trump, the world’s preeminent white-American-billionaire-victim denied the claims, even after evidence showed that Trump employees had coded applications from black people with a "C" for "colored." The Trump family eventually settled the suit and had to pay plaintiffs $40,000.

This is why most of us aren’t surprised when men who have reputations for being racist, like Jeff Sessions and Steve Bannon, are selected to be key members on Trump's team. His feelings toward “Code word C" have already been documented on the federal level. And this is why we shouldn’t be surprised that the first black people Trump decided to meet with during his transition to power were a football player, a rapper and a comedian — three people who have zero-to-no direct influence on contemporary black culture and no proximity to the issues facing poor black people; three people who the average black person in this country will probably never meet, understand or even bump into; three people who aren’t qualified to speak for us. That just shows what Donald Trump thinks of black people. He takes us as a joke, mere shallow entertainers — something to laugh at — and his stupid actions should give all citizens even more reasons to honor a real hero like John Lewis instead. Donald Trump is all tweets and no action, proving time and time again that even though some of the characters have changed, the struggle that Lewis fought for so bravely continues to this day.