Religious freedom: It's a core American principle, and it doesn't mean what right-wingers want it to mean

Although the latter-day GOP has tried to pervert this critical idea, it's not about selling cakes to gay couples 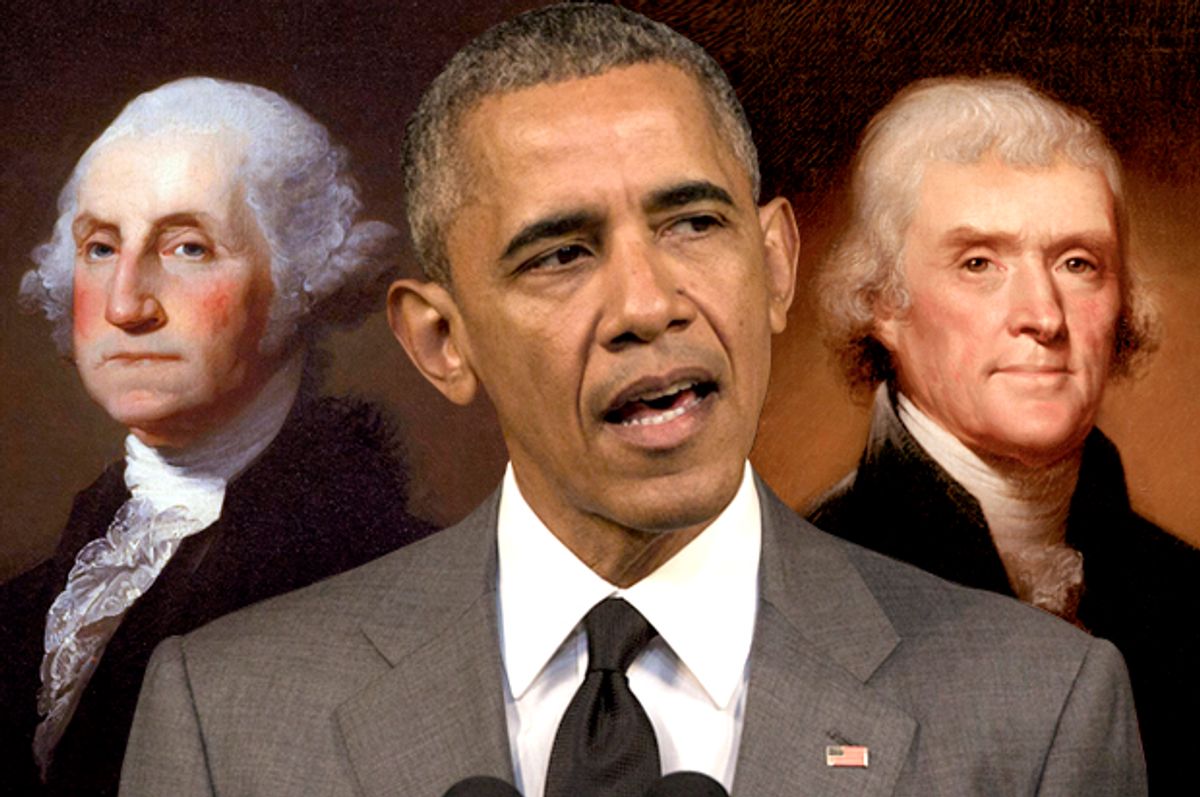 Forget the “War on Christmas.” Religious Freedom Day, which fell on Jan. 16 this year and coincided with the observance of Martin Luther King Jr. Day, has become one of America’s most-contested commemorative days. In most ways that’s a good thing because of the need to shed light on what’s at stake: the very foundations of our most cherished freedoms.

Although many members of the public are unfamiliar with it, Religious Freedom Day has since 1992 publicly celebrated the enactment of the Virginia Statute for Religious Freedom, which was drafted by Thomas Jefferson in 1777 and passed into law by his protégé, James Madison, in 1786. It disestablished the state power of the Anglican Church and ensured religious freedom for all.

For Jefferson and progressives today, the statute — which paved the way for the First Amendment — was a revolutionary break with theocratic rule, a fundamental precondition for all the freedoms we enjoy today or still are struggling to secure. Jefferson saw it as a crowning lifetime achievement, one so important it is inscribed on his tombstone. Its centrality was recognized by President Barack Obama in this year’s Religious Freedom Day proclamation:

Religious freedom is a principle based not on shared ancestry, culture, ethnicity, or faith but on a shared commitment to liberty — and it lies at the very heart of who we are as Americans. As a Nation, our strength comes from our diversity, and we must be unified in our commitment to protecting the freedoms of conscience and religious belief and the freedom to live our lives according to them.

But for members of the Christian right, religious freedom means almost exactly the opposite: the “freedom” to impose their will on everyone else, precisely the sort of power over others that Jefferson fought so hard against.

The religious right has been organizing intensively around its Orwellian redefinition of the term since the beginning of the Obama era. This was laid out in detail in a report by Frederick Clarkson of Political Research Associates titled “When Exemption Is the Rule: The Religious Freedom Strategy of the Christian Right,” as I summarized for Salon last year:

The title highlights a key aspect of the religious right’s long-term strategy, taking the time-honored principle of religious exemption, intended to protect the individual right of conscience, and expanding it recklessly to apply to whole institutions, even for-profit businesses — as seen in the Supreme Court’s 2014 Hobby Lobby decision, in a process designed to fragment the common public sphere and carve out vast segments of American life where civil rights, labor law and other core protections simply do not apply.

This strategy was kicked into high gear back in 2009 with the “Manhattan Declaration,” a widely endorsed manifesto linking “freedom of religion” specifically to “sanctity of life” and “dignity of marriage,” which religious progressives are just beginning to effectively counter-organize against. This report represents a significant beacon, shedding light on that strategy, the battlefield it’s waged on, and the kinds of long-term responses needed to counter-organize against it.

Clarkson stressed that the arguments being mounted today are virtually identical to those made decades ago when the religious right’s earliest organizing efforts involved defending Bob Jones University’s “right to discriminate” on religious grounds:

As recently as the 1980s, Christian Right activists defended racial segregation by claiming that restrictions on their ability to discriminate violated their First Amendment right to religious freedom. . . .

Over the past year progressive awareness around religious freedom has grown significantly. The right’s recent strategy is more widely known and talked about, and in addition  a positive counter-vision is taking hold, combining a deeper appreciation of Jefferson’s original vision with its living importance to all of us today.

In a Jan. 9 webinar kicking off a week of activity in advance of Religious Freedom Day, Clarkson brought to life the oppressive political context Jefferson was responding to: “Six months after authoring the Declaration of Independence, Jefferson joined with several others in January 1777 to discuss what would later become the Virginia statute,” Clarkson said.

“It was an urgent committee meeting because the success of the revolution depended in part on the cobbling together of a coalition of stakeholders, and religious dissenters of Virginia — the Baptists, Presbyterians and Methodists — were necessary if there would be any chance of defeating what was at the time the greatest military power in the history of the world,” Clarkson added.

If that sounds eerily familiar, there’s a good reason. As is the case for the Democratic Party of today, the popular foundation of the American revolution came from a diverse array of socially subjugated out-groups. But they weren’t brought together through quid pro quo backroom deals; they were brought together with a liberationist vision.

“Attendance at an Anglican church on Sunday was compulsory,” Clarkson explained. “Failure to attend was one of the most prosecuted crimes in colonial Virginia in the years before the revolution.” Legally, members of local Anglican church vestries "were also empowered to report crimes like heresy and blasphemy to local grand juries. Violators were dealt with harshly.”

But that’s not all. “Baptists were often victims of vigilante violence,” since practicing their faith made them publicly vulnerable, he said. “Men on horseback would often ride through the crowds gathered to witness a baptism, and preachers were horsewhipped and dunked in rivers and ponds . . . in a rude parody of their baptism ritual. Blacks attendees at these meetings, whether free or slave, were subject to particularly savage beatings” — a bleak picture all too easy to imagine today.

“This was all in recent memory of such abuses that helped to create the political moment that made Virginia the first government in the history of the world to self-impose complete religious freedom and equality," Clarkson said. "This actually effectively disestablished the Anglican church as the state church of Virginia, curtailing its extraordinary powers and privileges. It also decreed that citizens were  free to believe as they will and that this — and this is the key phrase in the legislation — that 'this shall in no wise diminish, enlarge or affect their civil capacities.' Put another way, one’s religious identity was irrelevant to one’s standing as a citizen.”

Clarkson went on to point out that Jefferson left no doubt about the legislation in his autobiography. “He wrote that the legislature had rejected a reference to Jesus Christ and that this proved that the legislation sought to protect the Jew, the Gentile, the Christian, the Mohammedan, the Hindu and the infidel of every denomination.” This was one of several facets of early American history recently cited in a New York Times book review by Kareem Abdul-Jabbar to make the point that “some of our founding fathers were very comfortable extending religious freedom to include Islam.”

Clarkson focused intensely on Jefferson because of his central role and repeatedly articulated views. But he was hardly an isolated figure — and not just because Madison was his protégé. The same political situation that Jefferson dealt with in Virginia was replicated throughout colonial America and persisted through the formation of the United States, bringing other leaders to embrace a similar outlook as well. A case in point was George Washington.

A Daily Kos diary this week, “Founding Father George Washington on Religious Freedom” went into considerable detail about Washington’s engagement with Rhode Island about its eventual approval of the Bill of Rights — most notably the First Amendment. In August 1790 before Rhode Island had voted, Washington paid the state his first visit:

Washington and his group were greeted by Newport’s leading citizens and representatives from the many religious denominations present in the city, including the Jews. Politicians, businessmen, and clergy read letters of welcome to the President. Among them was Moses Seixas, one of the leaders of Yeshuat Israel, the first Jewish congregation in Newport. The address read by Seixas was an elegant expression of the Jewish community’s delight in Washington as leader and in a democratic government. Seixas wrote:

"Deprived as we heretofore have been of the invaluable rights of free Citizens, we now (with a deep sense of gratitude to the Almighty disposer of all events) behold a Government, erected by the Majesty of the People — a Government, which to bigotry gives no sanction, to persecution no assistance — but generously affording to All liberty of conscience, and immunities of Citizenship: deeming every one, of whatever Nation, tongue, or language, equal parts of the great governmental Machine."

Both Seixas’ address and Washington’s letter in response (“To the Hebrew Congregation in Newport, Rhode Island”), which he sent several days later, have been posted online by the National Archives. In part, Washington wrote:

The Citizens of the United States of America have a right to applaud themselves for having given to mankind examples of an enlarged and liberal policy: a policy worthy of imitation. All possess alike liberty of conscience and immunities of citizenship. It is now no more that toleration is spoken of, as if it was by the indulgence of one class of people, that another enjoyed the exercise of their inherent natural rights. For happily the Government of the United States, which gives to bigotry no sanction, to persecution no assistance, requires only that they who live under its protection should demean themselves as good citizens, in giving it on all occasions their effectual support.

This was quite clearly the spirit of the age. The strongest opposition to it came from those who opposed the Revolution, the Anglican establishment and their supporters, whose power and influence were greatly diminished as the new nation formed. “During the debates in the states over ratification of the Constitution, this absence of any religious content was one of the main sources of opposition,” Clarkson noted, but without the traditional power base, that opposition failed.

“A few years later, the First Amendment sought to clarify the matter even further,” he added. “So they all knew that the opposition would never entirely recede, and that their experiment in religious freedom might not last. And they were not wrong about any of this.”

Though that opposition persists to this very day, it has never regained anything like the power it had previously had, prior to the Virginia Statute for Religious Freedom. This is the true history of religious freedom in America. It’s not a battle between the godly and the heathen but between the tolerant and the intolerant, the inclusive and exclusive, the forward-looking and the backward-looking. But it takes an accurate look backward to see the true way forward.