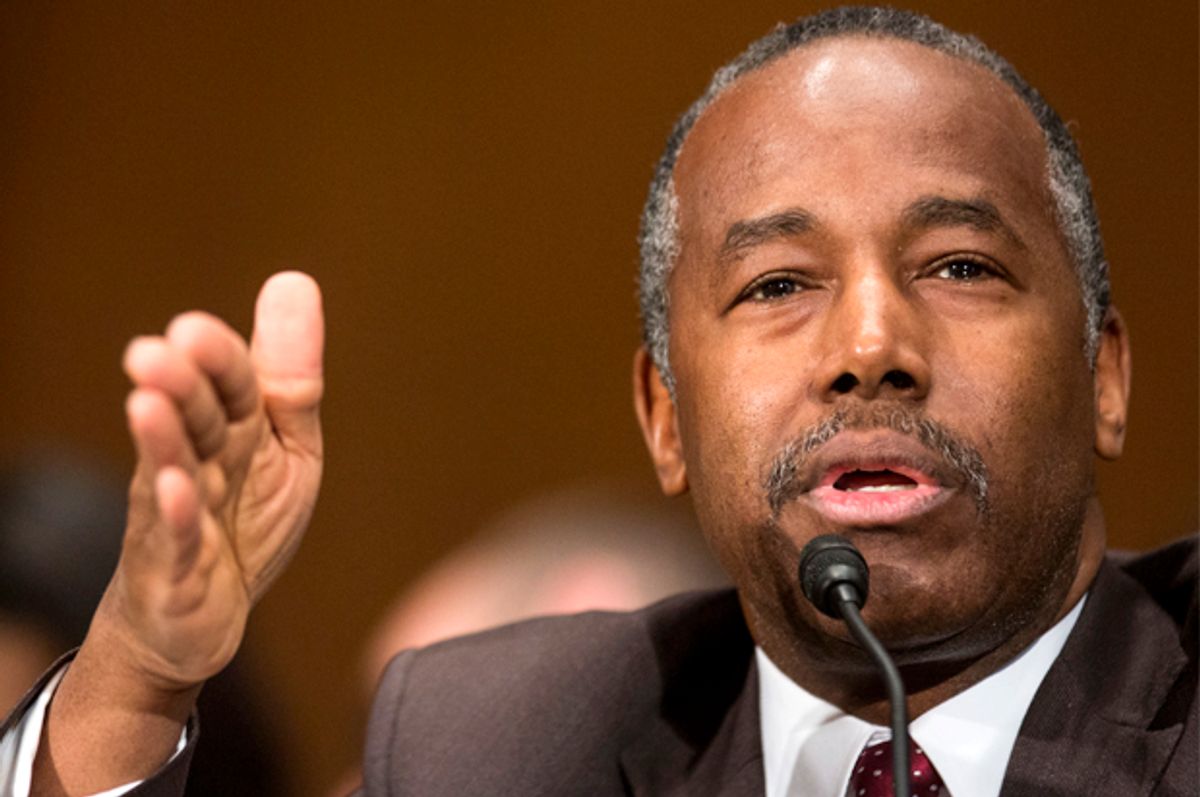 Last week the retired John Hopkins neurosurgeon began his testimony before a Senate committee, which is considering his nomination to be the secretary of the Department of Housing and Urban Development. Carson was asked by Sen. Sherrod Brown, D-Ohio, about his controversial statements about protections for the LGBT community. During his failed 2016 presidential campaign, Carson had claimed that the Supreme Court’s 2015 Obergefell v. Hodges decision on same-sex marriage amounted to “extra rights” being conferred. Carson has repeatedly reiterated this belief — that LGBT equality affords the community undue, unnecessary privileges.

On Thursday the Trump nominee did not back down from that argument. “Of course, I will enforce all the laws of the land,” Carson said, adding, “No one gets extra rights. . . . Extra rights means you get to redefine everything for everyone else.”

What’s alarming about Carson’s statement is that he wasn’t being asked about his opposition to marriage equality. Brown, who serves as the top-ranking Democrat on the Senate Banking Committee, was grilling him on whether he would protect the LGBT community from discrimination in federal housing, which Carson had dismissed as a frivolity. This is a grave reminder that Carson could do serious damage to federal housing programs by ignoring the egregious bigotry that queer and trans people face every day when trying to find something as simple as a place to live.

Carson, who has repeatedly made headlines for his incendiary, outlandish statements about the LGBT community, is no friend to queer people.

The “Gifted Hands” author is one of the nation’s most vocal opponents of equal marriage rights for same-sex couples, whom he has described as pratictioners of bestiality, polygamy and pedophilia. During a speech he delivered at last year's Pensmore National Symposium on Religious Liberty at Missouri’s College of the Ozarks, Carson warned that the Obergefell v. Hodges ruling was a harbinger of an “ever-growing government” that would lead to “utter chaos” as well as mass executions. “The peace we experience now will be a memory only,” Carson said.

The idea that granting same-sex couples the rights to have their relationships recognized and protected by federal law constitutes special benefits for a niche community is an old and favorite one of conservatives. It suggests, much as Sen. Jeff Sessions argued last week during a confirmation hearing on his nomination for attorney general, that gay people don’t experience discrimination. If they’re already being equally protected under the law, why do they need more laws granting them those same protections?

Bobby Jindal, the governor of Louisiana who also mounted an unsuccessful 2016 presidential bid,  had even used the “extra rights” reasoning to argue for targeting the basic civil liberties of the LGBT community. During a 2015 interview with “Meet the Press,” Jindal claimed that making LGBT people a “protected class” — borrowing phraseology from hate crime legislation — would amount to “extraordinary circumstances.” Claiming that there is now greater “tolerance” in society that makes such “special legal protections” unnecessary, Jindal had backed the introduction of a “religious liberty” bill in the Pelican State to let those running businesses deny services to customers on the basis of their sexual orientation or gender identity, so long as the companies involved cite “sincerely held religious belief.” Numerous LGBT advocates have argued that this type of legislation is a clear pathway to unleash broad-based discrimination.

As the secretary of Department of Housing and Urban Development, Carson would have little authority to affect already settled cases on nationwide marriage equality. But if he feels that LGBT protections are unnecessary, that would give him the ability to harm particularly vulnerable communities that already experience extraordinary discrimination at every turn.

A survey from the National Center for Transgender Equality found that 20 percent of transgender people surveyed reported being denied housing on the basis of their gender identity, while 10 percent even said they have been evicted for being transgender.

This widespread discrimination extends to homeless shelters. When the Center for American Progress called local shelters to see if they would house a transgender woman, just 30 percent said they would do so. Twenty-two percent outright refused, and one center in Virginia said that having to sharing space with a “man” would spook the other residents, citing unfounded fears of sexual assault.

These practices should be illegal, yet unfortunately they persist. As the Center for American Progress has reported, LGBT people are not explicitly protected under the Fair Housing Act, also known as the Title VIII of the Civil Rights Act of 1968. This law protects tenants under the basis of characteristics like sex, race, religion, or national origin but does not explicitly name gender identity or sexual orientation.

Last year the Department of Housing and Urban Development attempted to remedy this issue by introducing the Equal Access Rule so that housing units and homeless shelters that receive federal dollars cannot discriminate on the basis of gender identity. This provision, while a necessary step forward in ending the housing discrimination that leads to extremely high rates of homelessness among transgender people, will likely face a fight from the Trump White House.

Mike Pence, the vice president-elect, has already claimed that the incoming administration will seek to roll back protections for trans students put into effect during the Obama presidency. Last year the Obama administration issued guidance saying that transgender youth had the right to equal access in schools under Title IX of the Education Amendments of 1972.

When it comes to public housing, Carson is unlikely to fight against the removal of equivalent protections for trans people. In a speech delivered at the Republican National Convention, he referred to “the whole transgender thing” as “absurd.”

Carson said, “For thousands of years, mankind has known what a man is and what a woman is, and now, all of a sudden we don’t know anymore.” He added, “Now, is that the height of absurdity? Because today you feel like a woman, even though everything about you genetically says that you’re a man or vice versa? Wouldn’t that be the same as if you woke up tomorrow morning after seeing a movie about Afghanistan or reading some books and said, ‘You know what? I’m Afghanistan [sic]. I know I don’t look that way.’”

These views are ludicrously ill-informed, but with Carson as a part of Trump’s Cabinet, they would have power. His perspectives would have the authority and influence to deepen the extreme marginalization to which transgender people are already subjected.

Trans individuals, particularly trans women of color, are more likely than any other group to be the victims of a hate crime. They are disproportionately likely to live below the poverty line, be underemployed or not have a job at all. Transgender people face higher rates of sexual assault, domestic violence and suicide.

And all of this illustrates an important reality. This community doesn’t have extra rights. Trans folks have almost no privileges at all, especially under a hostile administration that seems to be on the verge of stripping them of access to life-saving medical care under the Affordable Care Act.

What Carson doesn’t understand is that trans people — and lesbian, gay and bisexual individuals — aren’t asking for extra privileges, just basic equality. They want the same things all of us desire: safe, fair housing and a life without fear. There’s nothing special about wishing to live your life without wondering whether you’ll be homeless tomorrow just because of who you are.