Thank you and farewell, President Obama: Will we ever see another truly "presidential" leader?

We're going to miss his pragmatism, his restraint and his "American cool" — we may never see his like again 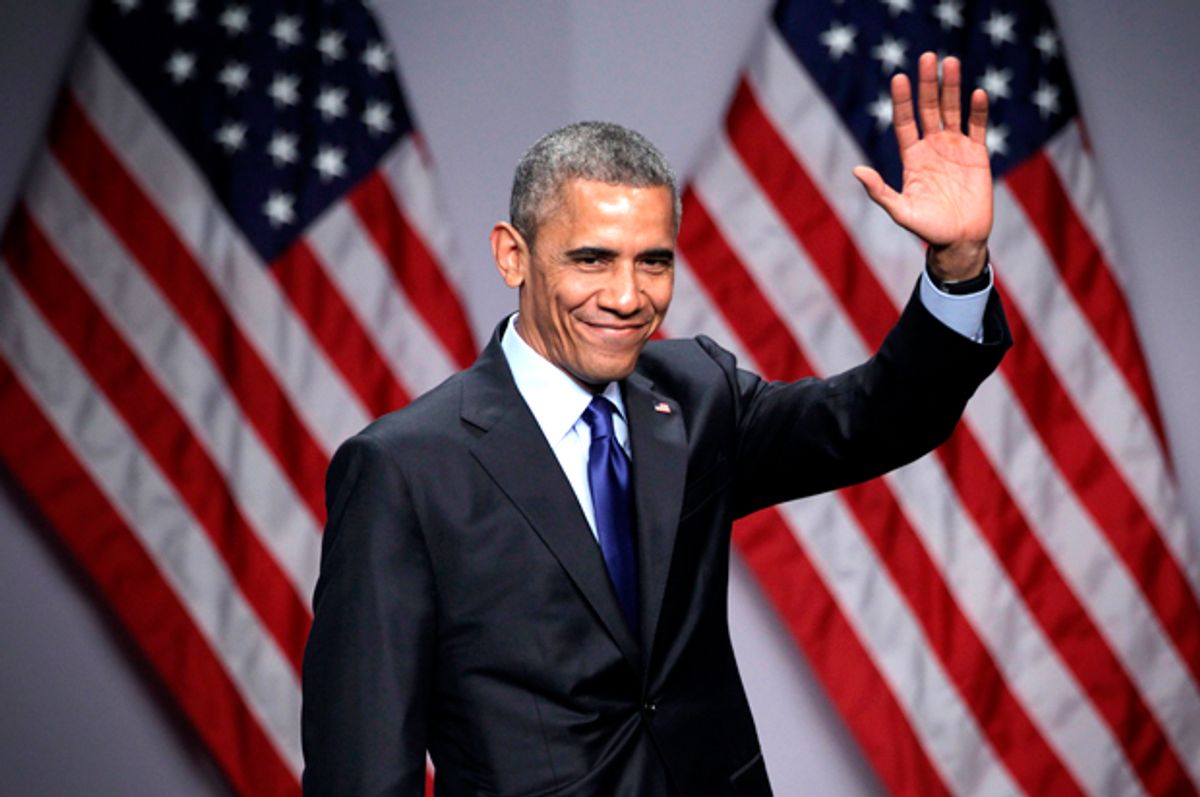 Early in 2007, I resigned myself to believing Hillary Clinton would easily march to the nomination the following year. No one seemed to have the machine or the charisma to upend her campaign, save for one guy and it was unclear whether he would actually run. It was even less clear whether he'd win.

While Sen. Barack Obama had dazzled the left during his 2004 keynote speech at the Democratic convention, "The Audacity of Hope," it was by no means certain that an African-American man with the middle name Hussein could be a viable candidate, even within the allegedly open-minded Democratic Party.

I was with Clinton until early November of 2007 when I heard Obama deliver his address at the famous Jefferson-Jackson dinner in Iowa, without a prompter (one of the rules of the event). It was not unlike his 2016 Democratic National Convention remarks, presented with an epic rhetorical style we had only seen in the movies. I realized that night that not only could Obama win the nomination; he had a serious shot at becoming the next president — and with the same flair that John F. Kennedy and Franklin Roosevelt brought to the office.

The following month I wrote my endorsement in The Huffington Post without hesitation, not fully realizing that he was in for an eight-year journey that would hardly ever be easy. I wish I could say I called everything precisely as it occurred in the subsequent years, but I didn't. In my defense, however, I forecast enough about Obama's presidency to save face.

As I researched and wrote about Obama, I quickly learned that in terms of talent, worldview and temperament, he was just about exactly what I had always considered to be presidential material — but so much more. He represented almost precisely what I have always looked for in my admittedly Aaron Sorkin-esque view of the office but the country had never quite landed upon, especially given the roster of unremarkable nominees the Democrats had fielded since 1968 — save for Mr. and Mrs. Clinton, of course.

While Obama and I have different approaches to persuasion and, obviously, different backgrounds and aspirations, he speaks to me — not in a creepy fanatical way but specifically in the way that people tend to connect with friends and role models. Something about Obama clicked into place for me. In political insider terms, he's "my guy," the only president I will feel this way about. There's something about his pragmatism, his Herculean restraint — his "American cool," as the great Charlie Pierce wrote last summer — that's linked me to this historic politician.

“American cool” is exactly what most of us observed through two terms: a man who, unlike Donald Trump, is eminently presidential with an almost unprecedented gift for being thoughtful, disciplined and consistently rational — a wickedly awesome mélange of impeccable character traits wrapped in a degree of charisma the likes of which few have surpassed.

Regardless of whether you agree with him on policy, Obama's "presidential-ness" ought to be undisputed. When evaluating Obama through the prism of political science and stripping away ideological bias, it's undeniable that while not all of his choices were laser precise, Obama  comported himself in a way that seldom if ever embarrassed us and more often than not made us proud.

Even if we discount the historic qualities that have made Obama a living legend, his behavior as chief executive was a gift — and in more ways than just legislative accomplishments. In my endorsement, I pilloried then-president George W. Bush like so: "If there’s any justice left in this nation, history will record that President Bush was an entirely inadequate tool; a bungling villain whose early popularity grew out of a traumatic and patriotic need to support the office regardless of who occupied it."

Indeed, throughout the Bush years, we were subjected to a constant diet of unsteadiness. We never quite knew what might happen next — what form of embarrassing devilry was on deck — undoubtedly a feature of the forthcoming Trump presidency, by the way, that will far surpass the worst Bush could muster. Obama's presidency was a gift, in that we could proceed through our daily lives without perpetually worrying about whether he would somehow humiliate us with an egregious gaffe, brain fart or, worst of all, another knee-jerk war. One of Obama's finest and most valuable attributes was that he allowed us to rest assured knowing that a smart, disciplined person — not given to whimsy or irrational blurting — was at the controls.

Now that Trump is on his way to the big chair behind the resolute desk, I suspect liberals and many conservatives alike will long for such a relative sense of calm from the White House.

Again, it was a gift.

As I watched the president's farewell address in Chicago, I thought about how lucky we'll be if we see another president of Obama's quality in our lifetimes, now that a colossal sackful of goblins have been released into the world with little hope that we can herd them safely back into captivity. Now that we have elected a president who is systematically destroying what it means to be presidential, the prospects of one day returning to a time when steadiness and rationality rule the day will be more difficult than ever to achieve. Whether we like it or not, the rules of the presidency are being rewritten with every whiny, grievance-filled tweet.

It's the rare presidential-ness of Barack Obama that so many conservatives and liberals alike never fully recognized when it mattered most. Consider the contrast between Obama's rousing farewell address and Trump's dismal, bungled press conference the following day, when he once again embarrassed the nation by acting like a petty, garish strongman and verbally spooning with Vladimir Putin.

Regarding the far left's reaction to Obama, specifically, you've probably heard the insufferable lament from certain liberals — the "I'm disappointed in Obama" gripe. If you happen to have supported Obama’s efforts, you were described pejoratively as an “Obamabot.” I wonder if Obama’s opponents on the left realize the depth of epic disappointment they are about to experience under President Trump. Knowing that Obama leaves office with a historically strong approval rating, it's safe to assume there are many more self-identified Obamabots today than there were prior to Election Day. It's also safe to assume that shortly after 12 noon on Jan. 20, everyone from hard-core leftists to moderate Republicans will identify as latent Obamabots.

In my 2007 endorsement, I wrote: "But after seven years in this Dark Age, I’ve almost forgotten what it was like to have a real president occupying the White House: a president who, even if I disagreed with his policies and ideology, dignified the office with a stature that symbolized the awesomeness of America."

I never thought we would be here again, facing down the prospect of another dark age of the American experience, and it won't take long before we ache for the light again. Some of us already are. I hope we don't forget the gift of Barack Obama — what it was like to have a real president occupying the White House.

And at the risk of asking for too much, please don't go away. Stay close to a microphone. We're going to need you and Mrs. Obama to remind us who we are as we careen through the treachery and madness of the Trump years.