Why is Donald Trump so cozy with the Kremlin? A political scientist and Russia expert breaks down the theories

It could be the infamous "kompromat" dossier — or something worse. It could be hero worship. But it’s dangerous 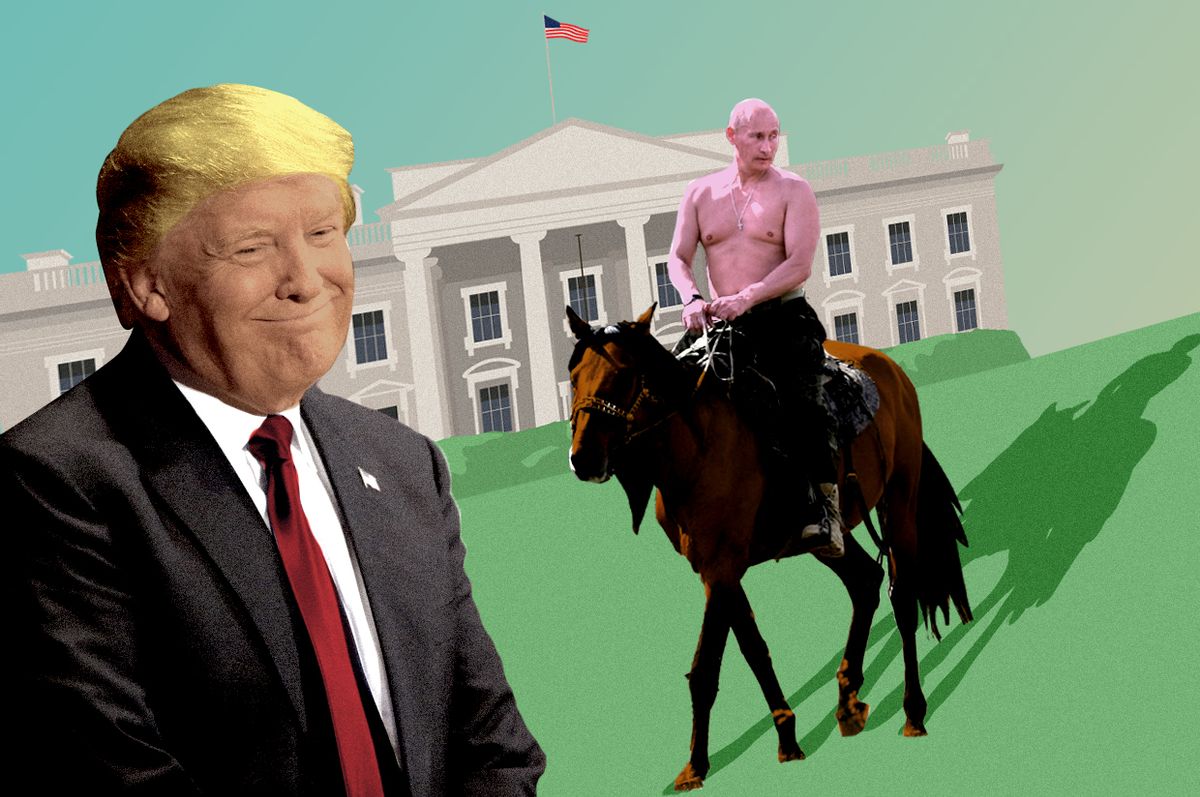 As a presidential candidate, Donald Trump promised to ban Muslims from the entering the country and to make Mexico pay for a border wall. He pledged to level the economic playing field with China and renegotiate the “very bad" Iran deal. These policies were red meat for his political base, even if he served them a bit on the rare side as compared with his Republican predecessors.

Trump’s Russia policy is different. His admiration of Vladimir Putin, his promise that “we will be looking at the annexation of Crimea" — presumably in a more favorable light than President Barack Obama did — and his skepticism toward NATO put the incoming president at odds with his party. Establishment Republican elites (including Vice President-elect Mike Pence) have been skeptical of these arguments, and these policy pledges brought Trump few political benefits at the ballot box.

Of course there was much happy talk about Putin among Trump supporters late in the campaign, but this was likely more an anti-Obama and anti-Clinton message than a pro-Putin one. A December poll found that even among Trump supporters only 35 percent of those surveyed said they had a favorable view of Vladimir Putin, while 51 percent of the respondents said they had an unfavorable view.

Since winning the election, Trump has doubled down on his Russia policy by dismissing claims that the Kremlin had hacked the U.S. political system and continuing to praise President Putin. This stance is even more puzzling given that in 2014 Trump called Russia a geopolitical foe and “our biggest problem.” Why has President-elect Trump’s Russia policy become so friendly toward the Kremlin?

The argument du jour, of course, is that Trump has been compromised by Russian intelligence in one or several ways. We have suddenly learned the word kompromat, referring to compromising material's being used to wield power over supporters and rivals alike, which is a bread-and-butter tactic in Russian politics.

Unverified documents behind CNN’s stunning report that U.S. intelligence agencies had briefed both Obama and Trump about a dossier of compromising material about Trump gathered by Russian intelligence suggest a range of possibilities. There could be a video of lewd behavior, perhaps shot during Trump’s hosting of the Miss Universe contest in Moscow in 2013. There could be hacked emails — perhaps about Russia’s involvement in the election — that have not yet been released. There could be direct payments from the Kremlin that Trump would prefer not to make public.

To no one’s surprise, on Tuesday Putin denied Russia’s involvement in the hacking scheme and charged that those who spread false reports like this are “worse than prostitutes.” A top Russian analyst of cyber-espionage, Andrei Soldatov, had a more mixed assessment of the Trump dossier, noting that while there are certainly errors of fact and interpretation in the document, “it is a good reflection of how things are run in the Kremlin.”

Claims that the president-elect has been seriously compromised in some unknown fashion are certainly plausible and have been making the rounds for some time. Well before CNN took the story public, Tom Graham, a longtime Russia hand now at Kissinger Associates, noted,  "I think [the Kremlin] most certainly have something on Trump." He added, "I don't know what it is but I think certainly more is going to be leaked and made public in the months ahead. There's got to be a dossier on Trump."

Kompromat could account for Trump’s surprising turn to pro-Putin policies and there is still much more to learn. But the evidence to date needs further vetting. The now-infamous Trump dossier published by BuzzFeed is largely based on as-yet-unverified claims from a single former British intelligence agent. While the U.S. and U.K. intelligence communities find this officer to be a credible source, the information he has provided has not been checked out thoroughly. There may be a smoking gun linking the Kremlin and Trump, but we haven’t seen it — at least not yet.

A second and not unrelated argument is that Trump’s business and financial interests are behind this policy shift. Trump has a long and unsuccessful history of trying to enter first the Soviet and then the Russian hotel and real estate market. Currying favor with the Kremlin would reverse this history of failure.

Perhaps more important, Trump’s business operations in the U.S. have benefited from deals made with Kremlin-friendly oligarchs in Russia and neighboring countries. In 2008 during a rough economic patch for the company, Donald Trump Jr. told investors that on a range of projects from Dubai to New York, “We see a lot of money pouring in from Russia.” Adding to the speculation is Trump’s continued refusal to release tax and other financial information that could address these concerns.

There is much unknown about links between Trump and Russian financiers. But if Trump were looking for a moneymaking operation for the Trump Organization, wouldn’t he be better off cozying up to China, where economic prospects are far better than in Russia? In addition, aren’t there easier ways to pad the Trump family's bottom line than relying on capital from the rough-and-tumble market of Russia?

A number of commentators have noted that Trump’s budding bromance with Putin might be at the root of his Moscow-friendly policies. Trump has been quick to compliment Putin’s leadership style and it is easy to speculate that Putin is the type of strong leader that Trump aspires to be. Whether Putin is actually a “strong” leader is an open question, but Trump certainly seems to see him that way.

This fails to explain, however, why Trump’s foreign policy is so consistent with the goals of the Kremlin. Admiration of Putin’s leadership style doesn’t require the president-elect to adopt pro-Kremlin policies. Indeed, this “strongman wannabe” explanation could just as easily predict that Trump would pursue a hawkish rather than dovish stance toward Russia. One can imagine Trump pumping up his macho image by taking a hard-line position against Russian expansion. (Please keep your shirt on, Mr. President-elect.) If that happened, pundits would surely argue that he was trying to out-Putin Putin.

The most charitable interpretation of this matter is that Trump sees Russia as a bulwark against what he calls “radical Islam” and a rising China. One could argue (although I would not) that a budding strategic alliance between Russia, Israel and the U.S. makes some strategic sense. Russian policy in Syria, however, seems more aimed at driving out U.S. influence than defeating ISIS. And the Kremlin seems far more keen on allying with Beijing against the U.S. than the other way around. In Europe, too, Russia’s actions hardly seem aimed at promoting better relations with the U.S.

Further undermining that argument is that Trump and his inner circle have not advanced with any level of sophistication a case for a new détente with Russia. Indeed, one of the most striking things about Trump’s Russian policy is the lack of any serious rationale to back it up beyond his wistful question: “Wouldn't it be nice if we got together with Russia and knocked the hell out of ISIS?" Trump’s offer over the weekend to trade nuclear arms cuts for removing economic sanctions on Russia seemed equally improvised.

The lack of any credible explanation from Trump about his sharp break with Republican orthodoxy (and increasingly Democratic orthodoxy as well) and the continued opacity of Trump’s finances are enough to raise serious doubts about the goals and intentions of American policy toward Moscow. If we don’t have any clear sense of why Trump is sidling up to the Kremlin, neither do our allies around the globe. Therein lies the danger. Wars often start not from any particular country’s desire for conflict but because of misperceptions and miscommunication about the intentions and capacities of others. In this sense, Trump’s inscrutable Russia policy has put the world at risk.

Timothy Frye is chair of the political science department at Columbia University and writes on politics, economics and Russia.