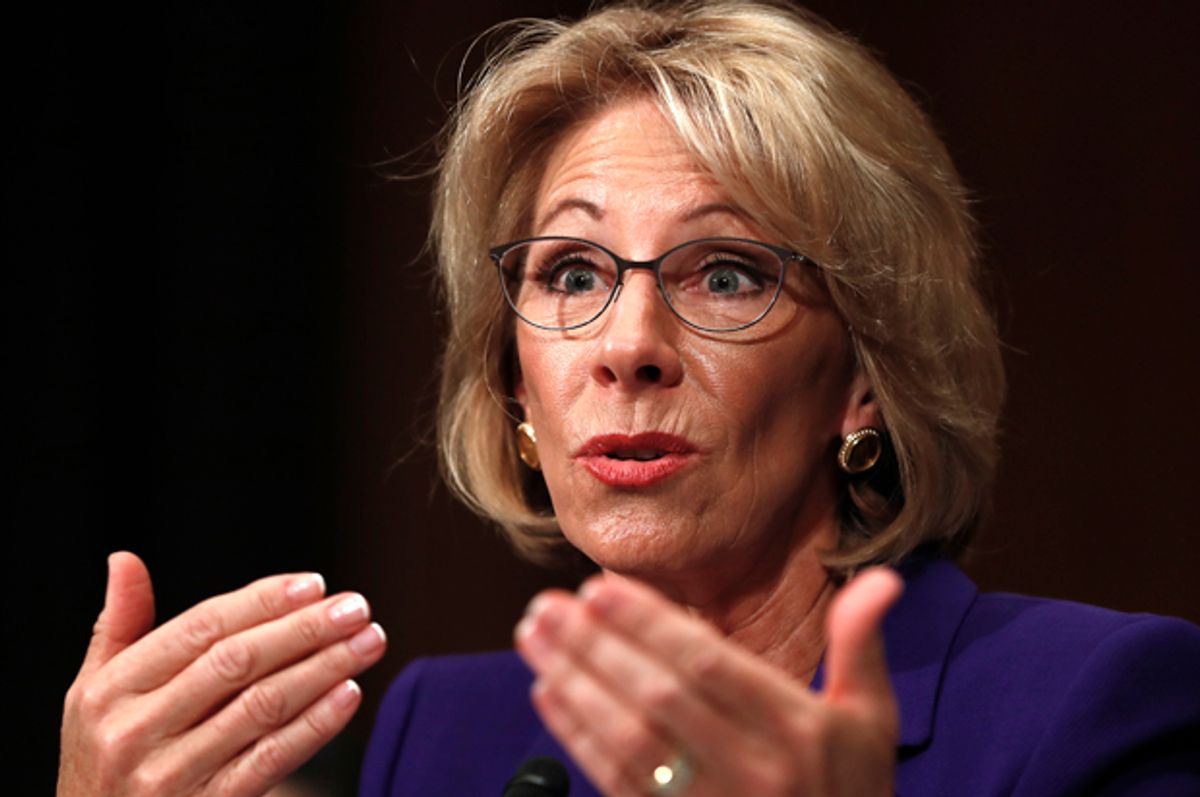 Brown v Board of Education, the legendary Supreme Court case that ended segregation in public schools, was decided nearly 63 years ago. Donald Trump hadn't yet turned 8 years old. And yet by nominating Betsy DeVos as secretary of education and rushing through her confirmation hearings on Tuesday, Trump and the overwhelmingly white Republican congressional contingent suggest that conservative white resistance to equality in education lives on.

First, a bit of history. White people have resisted equal and integrated schools since the Supreme Court famously overturned school segregation in 1954. At first, the resistance was overt, as when former governor Orval Faubus of Arkansas called in the National Guard to prevent black students from attending Central High School in Little Rock.

But once it became clear there was no way to forcibly resegregate public schools, white people across the South simply started enrolling their kids in all-white private schools, known as "segregation academies." While such schools can no longer legally discriminate on racial grounds, the academies persist to this day, using geography and income inequality to remain almost as white as they used to be.

White flight and geographic segregation has created a public school system that is nearly as segregated as it was in the 1960s and, of course, schools in predominantly black neighborhoods are generally underfunded. Black students are also systematically denied their right to an equal education by being disproportionately targeted for expulsion or suspension, often for minor disciplinary offenses.

Despite all these attacks on equal education, high school graduation rates have risen in the last four years for all students and especially for black students. Which is where Trump and DeVos step in, with a radical agenda to direct education funding away from public schools and toward private schools, making quality education harder for students of color to access.

DeVos and her fellow conservatives call their plan "school choice." But when you look at the way their schemes have played out in the real world, it's hard not to hear the echoes of the segregation academies.

"The most recent cautionary tale comes from North Carolina, where professors at Duke have traced a troubling trend of resegregation since the first charters opened in 1997," Jeff Guo of The Washington Post wrote in April 2015. "They contend that North Carolina’s charter schools have become a way for white parents to secede from the public school system, as they once did to escape racial integration orders."

While advocates of charter schools and "school choice" deny any racist intentions, the statistical evidence shows that charter school systems have led to an increase in school segregation and an increase of majority black and Hispanic schools with high poverty levels.

DeVos's own history on this front is somewhat unsavory. As Kristina Rizga at Mother Jones has reported, DeVos' little experiment in charter schools just so happens to target the predominantly black school districts in the Detroit area. Here's a lengthy quotation, because it's important to understand exactly what's going on here:

In Michigan, Detroit has been at the heart of the charter push, which began in the early '90s. In 1996, former Detroit Metro Times reporter Curt Guyette showed how the Prince Foundation [run by Betsy DeVos' father, Edgar Prince], as well as the foundation run by [Betsy's husband] Dick DeVos' parents, funded a carefully orchestrated campaign to label Detroit's public schools as failing — and pushed for charters and "universal educational choice" as a better alternative. While Betsy DeVos has not called for an end to traditional public schools, she has written about the need to "retire" and "replace" Detroit's public school system and pressed for aggressively expanding charter schools and vouchers. (In 2000, Dick and Betsy DeVos helped underwrite a ballot initiative to expand the use of vouchers in Michigan and lost badly.)

Detroit's schools — where 84 percent of students are black and 80 percent are poor — have been in steady decline since charter schools started proliferating: Public school test scores in math and reading on the National Assessment of Educational Progress have remained the worst among large cities since 2009. In June, the New York Times published a scathing investigation of the city's school district, which has the second-biggest share of students in charters in America. (New Orleans is No. 1.) Reporter Kate Zernike concluded that lax oversight by the state and insufficiently regulated growth — including too many agencies that are allowed to open new charter schools — contributed to a system with "lots of choice, with no good choice."

As Jennifer Pribble and Jennifer L. Erkulwater at The Washington Post have reported, "school choice" has a long history in Chile, which spent the 1980s as a testing ground for all sorts of radical authoritarian ideas. Gen. Augusto Pinochet, the Chilean dictator, introduced school vouchers in 1980, using the same arguments that charter proponents use today. Vouchers did not improve educational outcomes. On the contrary, the voucher system badly damaged public education in Chile, especially for low-income students.

"Since vouchers were introduced, public school enrollment has continued to decline" in Chile, Pribble and Erkulwater wrote. "In 1981, 78 percent of students attended a public school. In 2013, 39 percent did."

Even though lower-income students are eligible for vouchers, in reality they often have no way use them, either because they can't afford the tuition co-payment or lack the means to travel to a private school.

At a certain point, it's time to stop pretending that these poor outcomes are an accident and start to consider the possibility that excluding low-income and minority students is largely the point.

Unfortunately, many liberals, including President Barack Obama, continue to insist there's some value in the charter system. Whether it's out of a honest misreading of the situation or an effort to meet conservatives halfway hardly matters. The nomination of a radical like DeVos lays the ugly intentions behind these school voucher schemes bare. Public education faces significant problems and solving them will not be easy. It cannot be accomplished by introducing an unnecessarily complex system designed to increase segregation and inequality by clandestine means.