By freeing Chelsea Manning, Obama saved her life. Many other trans prisoners won’t be so lucky

Manning’s freedom will be a major victory for LGBT rights, but other incarcerated trans people continue to suffer 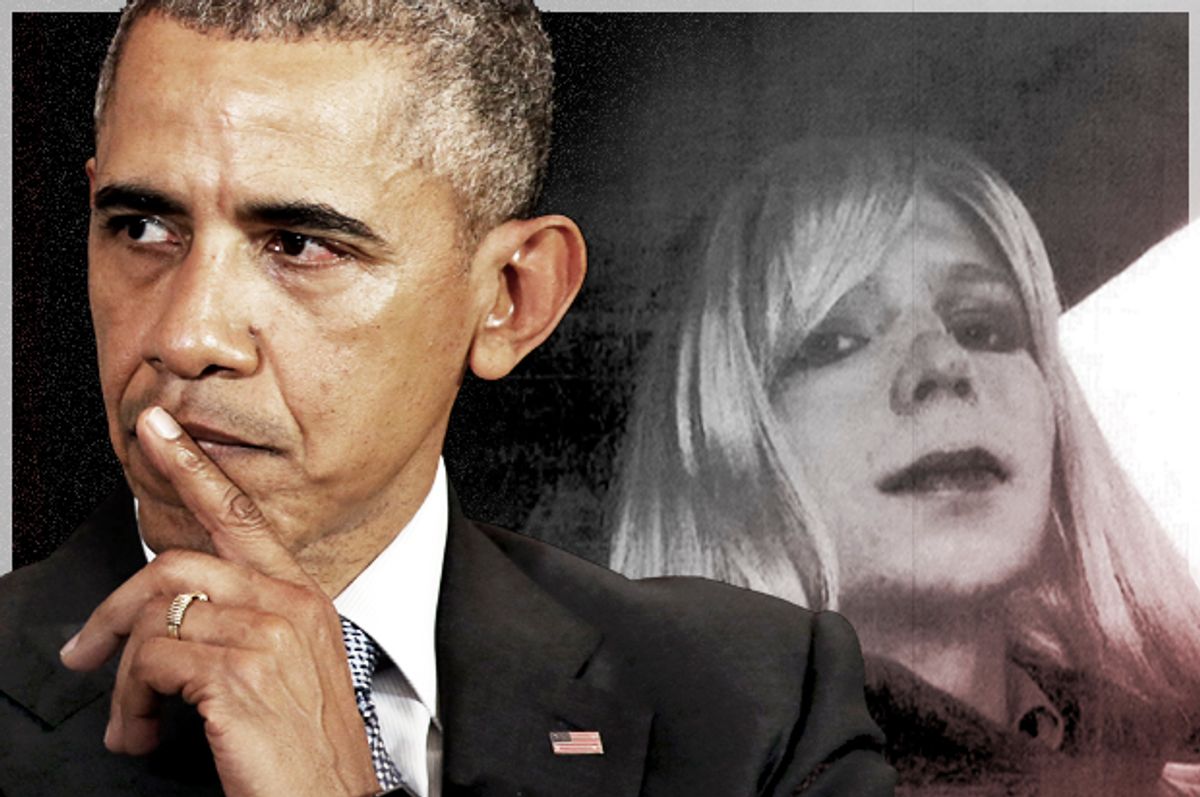 Chelsea Manning will soon be free.

Following pressure from LGBT advocacy groups, President Barack Obama commuted the sentence of the whistleblower, who has served seven years at the Fort Leavenworth military prison in Kansas, an all-male facility. As groups like the American Civil Liberties Union, National Organization for Women, Lambda Legal and the Transgender Law Center argued in a December letter asking for clemency from the Obama administration, freeing Manning — who will now be released in May — won’t just end the cruel and unusual punishment that she has experienced as a trans woman behind bars. This decision could very well save her life.

Manning was just 22 when she leaked documents to WikiLeaks and Adrian Lamo detailing human rights violations during ongoing conflict in the Middle East. One video shows American military forces in Baghdad firing on a group of Reuters reporters from the safety of their helicopters, believing that they were enemy combatants. Two were killed in the gunfire. Further documents detailed the illegal detainment of prisoners in Guantánamo Bay, where many are held without receiving due process.

During her trial, prosecutors asked the court to throw the book at Manning, who had only recently come out as transgender, as a form of deterrence. “This court must send a message to any soldier contemplating stealing classified information,” the opposing counsel argued during the case. The prosecutors asked for a sentence 60 years. Manning received one of 35, the longest sentence ever given someone accused of leaking secret government documents.

This is despite the fact that, as The New Yorker’s John Cassidy has pointed out, the information she provided posed little harm to American soldiers still on the ground in Iraq and Afghanistan. “The government’s attempts to show that Manning’s leaks aided Al Qaeda were almost laughable,” he wrote.

The experience of Manning, now 29, in the prison system highlights the routine and grievous injustice that trans women are subjected to when they are incarcerated. While she awaited trial, the whistleblower was held in solitary confinement at the military prison in Quantico, Virginia.

“It was a humiliating and degrading experience  —  one that altered my mind, body and spirit,” Manning wrote in a post for Medium, adding, “These experiences have broken me and made me feel less than human. I have been fighting for years to be treated respectfully and with dignity; a battle I fear is lost.”

Manning has endured repeated stints in solitary confinement, even for infractions as small as having magazines and expired toothpaste in her cell. She received the periodicals — which included a copy of Vanity Fair with Caitlyn Jenner on the cover — through the prison’s open mail system.

More egregiously, the prison has also used solitary confinement as an apparent punishment for Manning’s suicide attempts. The former soldier has tried to take her life twice. Placing prisoners who are at risk of self-harm in solitary situations is intended to prevent future attempts, however, studies have shown that it can have deleterious affects on a prisoner's mental health, which can lead to further suicidal ideation. Nonetheless, Stuart Grassian, a former lecturer at Harvard Medical School, found that a third of inmates who had been held in solitary housing units were “actively psychotic and/or acutely suicidal.”

Manning, who spends her days in an 80-square-foot cell, has also been denied throughout her time behind bars gender-affirming care,  including access to surgery. Following Manning's hunger strike, the U.S. Army agreed to let Manning surgically transition in prison, although she has continued to face other issues. Per prison guidelines, her hair cannot be longer than than the guidelines set for male prisoners, which can be enormously harmful to someone experiencing gender dysphoria.

“Given the recognition of Chelsea's health care needs,” Chase Strangio, an American Civil Liberties Union staff attorney involved with LGBT and AIDS issues, wrote in a September press release, “We hope that she is immediately permitted to grow her hair consistent with the standard for female military prisoners.”

Manning’s removal from prison is a major victory for LGBT rights activists, but trans prisoners in the U.S. will continue to suffer these extreme abuses.

According to the Bureau of Justice Statistics, 3,200 transgender inmates are currently being held in U.S. detention centers — a majority of them will do time in facilities not designated for their gender identity. These detainees are subject to horrific violence from prison guards and other inmates. A survey of trans female prisoners in California found that nearly two-thirds polled had experienced sexual assault behind bars, a rate of abuse that is 13 times higher than the general prison population has faced. These inmates, few of whom will receive proper medical treatment, are also at an extremely high risk for HIV.

Ashley Diamond, a transgender woman, sued the Georgia Department of Corrections after she claimed she was sexually assaulted seven times and denied hormone therapy, despite the fact that she had been taking estrogen for nearly two decades. Diamond also told The New York Times that guards referred to her as “he-she thing” and repeatedly placed her in a solitary housing unit for “pretending to be a woman.”

Diamond, who was 33 when she was sentenced for burglary, attempted to castrate herself in response to her treatment behind bars.

Last year Diamond, who was represented by the Southern Poverty Law Center, reached a settlement with the state. This decision was followed by the release of guidelines by the Obama administration saying that “written policy or actual practice that assigns transgender or intersex inmates to gender-specific facilities, housing units, or programs based solely on their external genital anatomy” contravenes federal regulations. According to the Department of Justice, prison officials must take into consideration gender identity when placing trans prisoners in lockup facilities.

The problem, of course, is that the DOJ guidance constitutes only a recommendation, one that individual states and local facilities have the ability to follow or ignore. And given that President-elect Donald Trump's nominee for attorney general, Jeff Sessions, is no ally to the LGBT community, it’s unlikely that the government will continue to advocate for further reforms when it comes to the treatment of transgender inmates.

When Manning is released in May, it will be a tearful moment for those who have fought for her survival for years. But there are still many more prisoners who continue to need help and support.