Founder of alt-right mecca The Right Stuff hopes for comeback after revelation his wife is Jewish; rivals attack 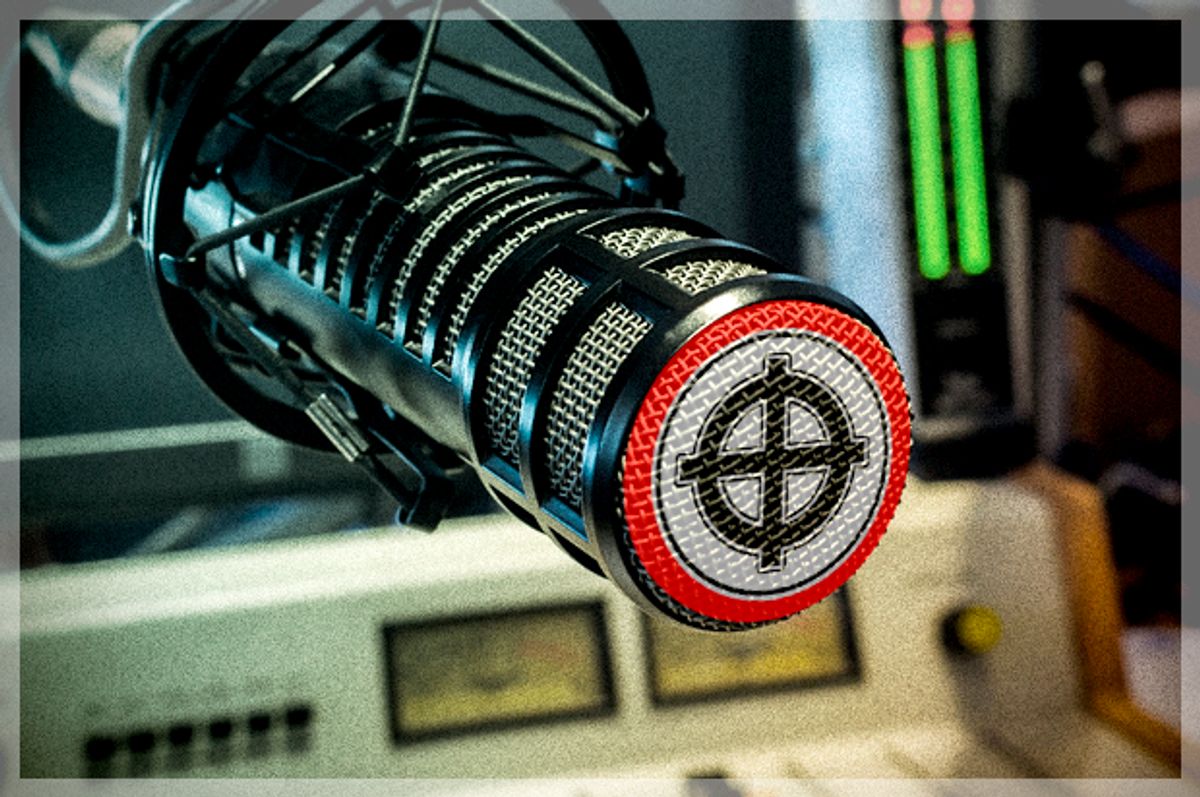 Racist podcaster Mike Peinovich has decided to return to his white nationalist program after quitting earlier this week, following reports that he had kept his neo-Nazi fans in the dark about his marriage to a Jewish woman.

In a podcast released to the public on Wednesday, Peinovich — better known as “Mike Enoch,” creator of The Right Stuff (or TRS) blog and co-host of “The Daily Shoah” — told listeners said that having his real name and details of his private life revealed had made him feel he had “basically lost everything in my life.”

On the program, Peinovich didn’t discuss his wife or the status of his relationship. In a separate podcast released on Tuesday, one of his partners, Jesse “Seventh Son” Dunstan, claimed that Peinovich and his wife were “separating.”

“This entire thing is not going to destroy us,” Dunstan said. “There’s nothing else for us to do but TRS.”

Dunstan went on to denounce the anti-fascist activists who had revealed Peinovich’s identity, vowing that their actions would only accelerate The Right Stuff’s long-term goal of supplanting the outdated and aging hosts of conventional conservative talk radio. “It’s a major miscalculation, man,” Dunstant said.

On the podcast, Peinovich claimed that media outlets were trying to destroy him by exposing the details about his marriage, in retaliation for Donald Trump’s victory.

“They’re saying it’s over,” the Right Stuff founder said, neglecting the fact that it was Dunstan who had earlier announced that Peinovich was leaving the site. “They want all of this to die and go away. And they’re hoping that this issue will make it happen.”

During his 90-minute appearance, Peinovich repeatedly denied that he had lied to his fans, saying that he had failed to disclose his marriage only out of a desire to protect his “normie” job, and by extension, The Right Stuff. “I don’t think it was deceptive,” he said.

Peinovich’s comeback efforts have received a mixed reception from fellow denizens of the far-right racist fringe. On Saturday, “Daily Shoah” co-host “Bulbasaur” sharply denounced Peinovich on Twitter, saying he belonged in a gas chamber. Bulbasaur subsequently deleted his account from the social-media service and has been unresponsive to his former associates’ attempts to contact him, according to Dunstan.

On Wednesday night, two of the podcasts hosted on TRS’ technology platform announced they were withdrawing and creating their own site. Their blog post announcing the move to TRS listeners was promptly erased from the site, apparently by Peinovich or one of his partners. (An archived version of it is still available.)

The hosts of TRS’ most popular podcast, “Fash the Nation,” abruptly erased their website and deleted all of their show archives. It’s unknown when or where the 120,000 listeners of the weekly program can expect to download another episode. As of last September, “Fash the Nation” was the most popular conservative political podcast on the audio sharing site SoundCloud. It was banned from the service shortly thereafter.

Other TRS hosts appear to be sticking with Peinovich, at least for now. He’s also received a fair amount of support from many of the leaders in the alt-right movement, including racist and anti-Semitic publisher Greg Johnson, who wrote an impassioned defense of Peinovich. Johnson also confirmed reports that Peinovich’s wife “was aware of Mike’s work and supportive of it.”

According to Johnson, Peinovich’s transition from an anarchist libertarian to anti-Semitic white nationalist was an “inspiring” tale:

Mike had a front row seat on America’s decline in his very own family. The Jews want to smash our families and mix our genes and loyalties to the point that we can never contemplate reversing our programmed march to extinction. But with Mike and so many others, these blended families and mixed children helped red-pill him. The true story of his life is far more inspiring than any of the shattered fantasies of disappointed fans.

Peinovich also received support from Richard Spencer, the president of a racist “think tank” made famous in December after Peinovich and others performed Nazi salutes in front of the media. Former Klansman David Duke has also defended Peinovich. Andrew Anglin, creator of the popular neo-Nazi blog the Daily Stormer, has also backed Peinovich, while adding that he believed the The Right Stuff creator should have divorced his wife long ago.

While Peinovich has maintained a fair amount of support among leaders of the alt-right, the grassroots activists who really make things happen for the movement have been far less forgiving of his deception. The anonymous activists with the image board 8chan have continued to expose even more details about Peinovich’s life since he was first doxxed on Saturday — including his phone number, email and home address in Manhattan — and show no signs of forgiving him. Many have also criticized him for lying when he initially told Salon that he was not Mike Enoch.

8channers also denounced Peinovich’s Wednesday podcast appearance, with many saying it proved  his beliefs were not as far right as he claimed.

Peinovich also appears to be having difficulty retaining some of the The Right Stuff audience. Shortly after he first admitted that his wife was Jewish, the site disabled its free-range web forum after many users began condemning him. On the Wednesday podcast, Peinovich and Dunstan claimed the discussion board had been “infiltrated” by people looking to cause trouble. TRS site administrators appear to have disabled comments on all podcasts dealing with the Peinovich controversy.

At the Daily Stormer, readers were sharply negative toward Peinovich. One user wrote that he believed that “The Daily Shoah” was going to return to being a podcast for libertarians. “It didn't sound like he was splitting up with her either,” the user added.

Another user likely spoke for many when he condemned Peinovich and his partners for answering irrelevant questions and not providing enough specifics about his personal situation during the Wednesday podcast:

This was not good. I really don't think this could have been worse. He's pointing to losing a job and his life being ruined, nothing we can prove, and as a tech guy he can get another job easy, contract work easy.

He never confirms the divorce, he acts like this is a TRS origin story, he doesn't have a plan for reestablishing trust, and he babbles about the problems within the movement most of the time.

Despite widespread activist discontent, it may be too soon to write off The Right Stuff. According to Peinovich, the podcast network is “possibly self-sustaining at this point.” TRS relies primarily on donations and merchandise sales for revenue.

Given how uninterested mainstream conservative and libertarian publications and broadcasters have been in catering to younger right-wing audiences, and the fact that TRS faces little podcasting competition within the alt-right, it’s quite possible that Peinovich’s creation may continue and even expand, assuming it survives the current fracas.

As one 8channer put it: “Anyone with a brain can see that these people were trying to position themselves in such a way that they would profit immensely from this gap in the market. . . . These guys were ready to be the next Rush [Limbaugh].”