That photo of Trump "writing" his speech on a blank notepad is just lazy, even for authoritarian propaganda 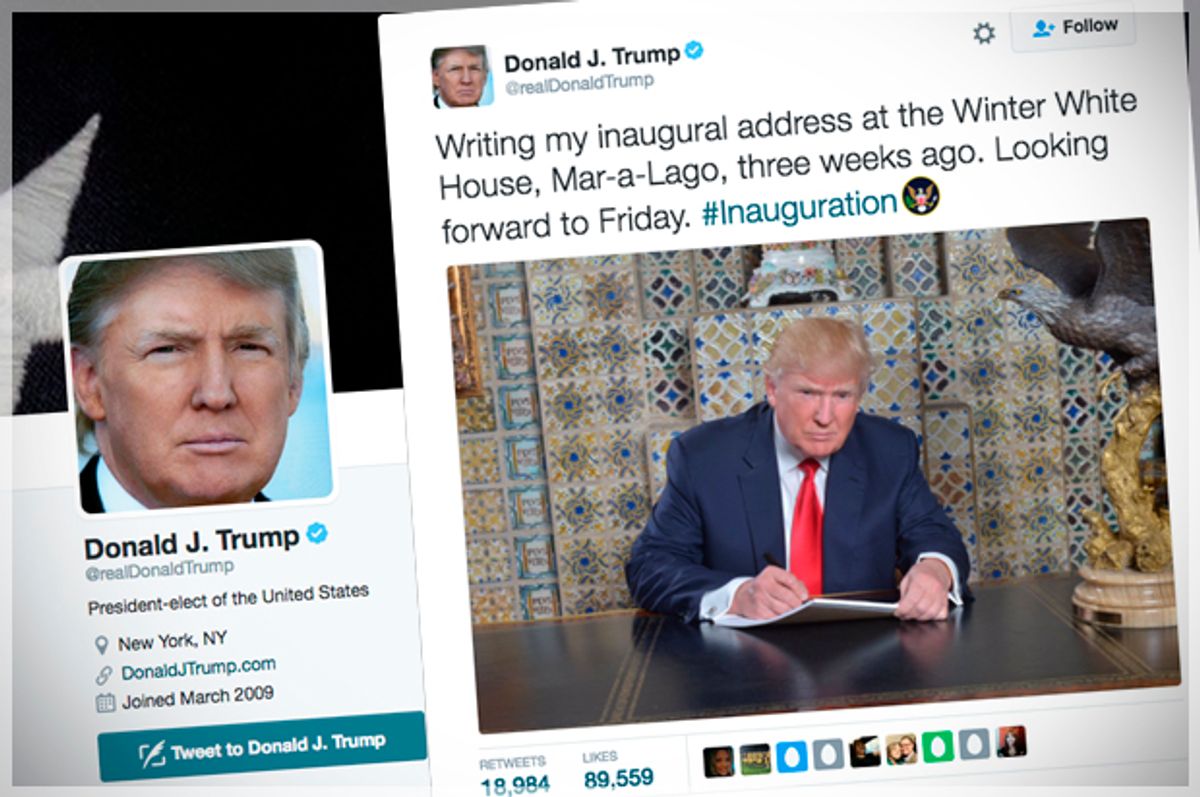 The picture says a great deal. The future president seated at a desk at home, pen poised over a pad of paper, conjuring up the soaring rhetoric of the address he will deliver to the nation when he is sworn into office in a few weeks’ time. It will be a great speech, terrific really, the antidote to an often contentious and angry election. He will speak to a country’s aspirations for itself, its patriotism. He will remind the people that he is the person who will heal the nation, fix its health care and crumbling infrastructure, bring back all the jobs the people could ever want.

It is a heavy burden he carries in writing this speech and in leading this country. You can see it in the look of intense concentration on his face as he stares into the middle distance, searching his internal thesaurus for the perfect touch that will kick off his reign and inscribe his inaugural address alongside the greatest in the nation’s history, taking its place with “Ask not what your country can do for you” and “The only thing we have to fear is fear itself.”

Of course the picture is all bullshit — as are the words that Donald Trump tweeted out with it on Wednesday: “Writing my inaugural address at the Winter White House, Mar-a-Lago, three weeks ago. Looking forward to Friday.”

Of course all presidents release pictures showing them hard at work doing the people’s business. Propaganda is an important part of the job of a White House communications team. And the enormous number of outlets available in the modern era — not just the media but social media, the official White House Twitter and Instagram and Facebook pages demanding a constant stream of messaging and imagery — demands a steady stream of content.

But there is something so obviously phony about the speechwriting photo, as if Trump and one of his kids staged and shot the scene on the spur of the moment in between rounds of golf. A man who famously does not like to read and whose books are all ghostwritten, a man whose aides are often frustrated by his inability to focus on one subject for more than a minute or two at a time, is not a person who is going to sit down and write a speech for his presidential inauguration. Someone is going to get this speech from Trump’s team and load it into the teleprompter, and the president-elect will quite possibly not read it through even once until it is scrolling across the screen in front of him after he takes the oath of office on Friday.

This is going to be the propaganda of the upcoming era, and it will be as cheap, half-assed and transparent as plastic wrap. Yet plenty of people will buy into it, as they have bought into all the myths that have been spun around this man that the nation finds itself saddled with — an autocratic, insecure leader who has (allegedly) written and published many books, enjoys parades that show off the military, built monuments to himself and supposedly has a fantastic golf game.

Sure, this also describes Kim Jong-il to a T. But no matter what anyone says about Donald Trump and the deceased North Korean leader, one fact is inescapable: Trump is taller.