Hands out: GOP governors who turned down Medicaid money are now asking for funds to insure low-income Americans

Medicaid expansion was a non-starter under President Obama. But now, governors are sining a different tune 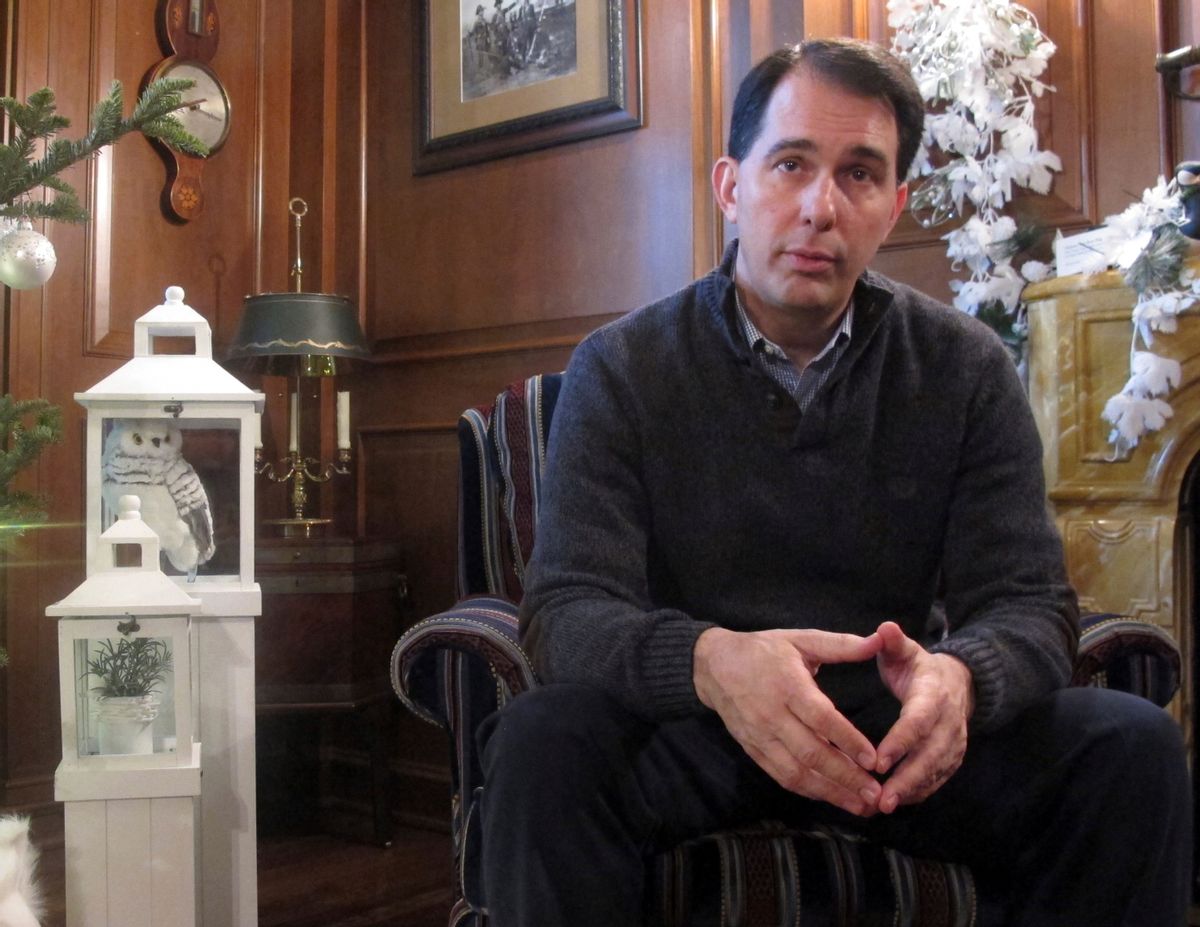 FILE - In this Dec. 21, 2016, file photo, Wisconsin Gov. Scott Walker speaks during an interview with The Associated Press in Maple Bluff, Wis. Republican governors who turned down billions in federal dollars from an expansion of Medicaid under President Barack Obama’s health care law now have their hands out in hopes the GOP Congress comes up with a new formula to provide insurance for low-income Americans. (AP Photo/Scott Bauer, file) (AP)
--

DES MOINES, Iowa — Republican governors who turned down billions in federal dollars from an expansion of Medicaid under President Barack Obama's health care law now have their hands out in hopes the GOP Congress comes up with a new formula to provide insurance for low-income Americans.

The other GOP governors who agreed to expand state-run services in exchange for federal help — more than a dozen out of the 31 states — are adamant that Congress maintain the financing that has allowed them to add millions of low-income people to the health insurance rolls.

These two groups of Republicans embody the difficulty the emboldened GOP congressional majorities face: Make good on their promises to repeal the 2010 health care law while preserving popular provisions.

Republican governors and lieutenant governors plan to plead their cases with GOP leaders and the Senate Finance Committee on Thursday as the GOP majority has taken the first step to dismantling the law.

In the three years since the Affordable Care Act went into effect, Medicaid enrollment has grown by about 18 million people, to roughly 75 million, according to the federal Centers for Medicare and Medicaid Services.

Wisconsin Gov. Scott Walker notably turned down more than $500 million for his state. Determined to win over conservative voters for his presidential bid, he doubted the federal government would keep its word to cover 100 percent of expansion costs in the first three years, and 90 percent over the long term.

On average, the federal government's contribution accounts for 56 percent of a state's Medicaid budget, making the financing terms under the health care law much more generous. Wisconsin's federal split is about 60-40.

Instead of taking the extra money, Walker used the existing formula to shore up coverage for Wisconsin's poorest and release less-poor Medicaid recipients into the private insurance market and public program in the Obama law.

"The simple message is this: Vote to repeal and replace Obamacare immediately and send Medicaid funding to the states in the form of a block grant," Walker wrote last week in a letter to House Majority Leader Kevin McCarthy, R-Calif.

Republicans have long sought block grants or lump-sum payments for health care. The money has helped them maintain their budgets, while the relative lack of heavy regulation has allowed governors freedom to experiment with social services policy.

But with Republicans, backed by President-elect Donald Trump, pursuing repeal of the law, Walker and others GOP governors are asking specifically for the Medicaid money, and fewer rules for spending it.

"What they're really saying is let's look at this again through the lens of greater freedom and flexibility from those constraints, and we'll take a fresh look at expansion," said Dennis Smith, who was Medicaid director for President George W. Bush.

"Now that Barack Obama is no longer going to be at the White House, it is going to be much more palatable for Republican governors to seek additional funding," he said.

All Democratic governors in office when the law took effect in 2013 agreed to the expansion. Even Republican governors in 11 states agreed to expand Medicaid, some with specific waivers that still allowed them to claim the federal reimbursement.

Now, Republican leaders in states aren't just asking for money they turned down. They're asking to change the formula to get back what they lost.

The federal Medicaid formula is based in part on how many enrollees a state had as of 2016. By last year, Ohio, for instance, had added 700,000 recipients since accepting the Medicaid expansion. For Michigan, it was roughly 630,000.

But Medicaid in Kansas grew at a far slower rate, given Gov. Sam Brownback's opposition to the federal law. Now, he wants Congress to change the formula to benefit his state.

"As it stands now, because you didn't do it, you're going to miss out on a bigger block grant," said Kansas Lt. Gov. Jeff Coyler.

Changing the rules to help states that held out will be a concern for Republican governors in places like Indiana, Iowa, Michigan and Ohio, former White House Medicaid director Smith said.

"What happens to states that expanded Medicaid? Do they go back to pre-expansion dollars?" he asked.

Iowa Gov. Terry Branstad doesn't think so. He is confident his state's program, modeled on the Indiana plan adopted by now-Vice President-elect Mike Pence, will be upheld.

"Do I think that Obamacare can be dramatically improved? I do," Kasich told reporters this month. "Do I want to see a repeal of the expansion of Medicaid? I don't."

From The Wires Medicaid Scott Walker