Lack of Latinos in Trump Cabinet draws ire for "setback" 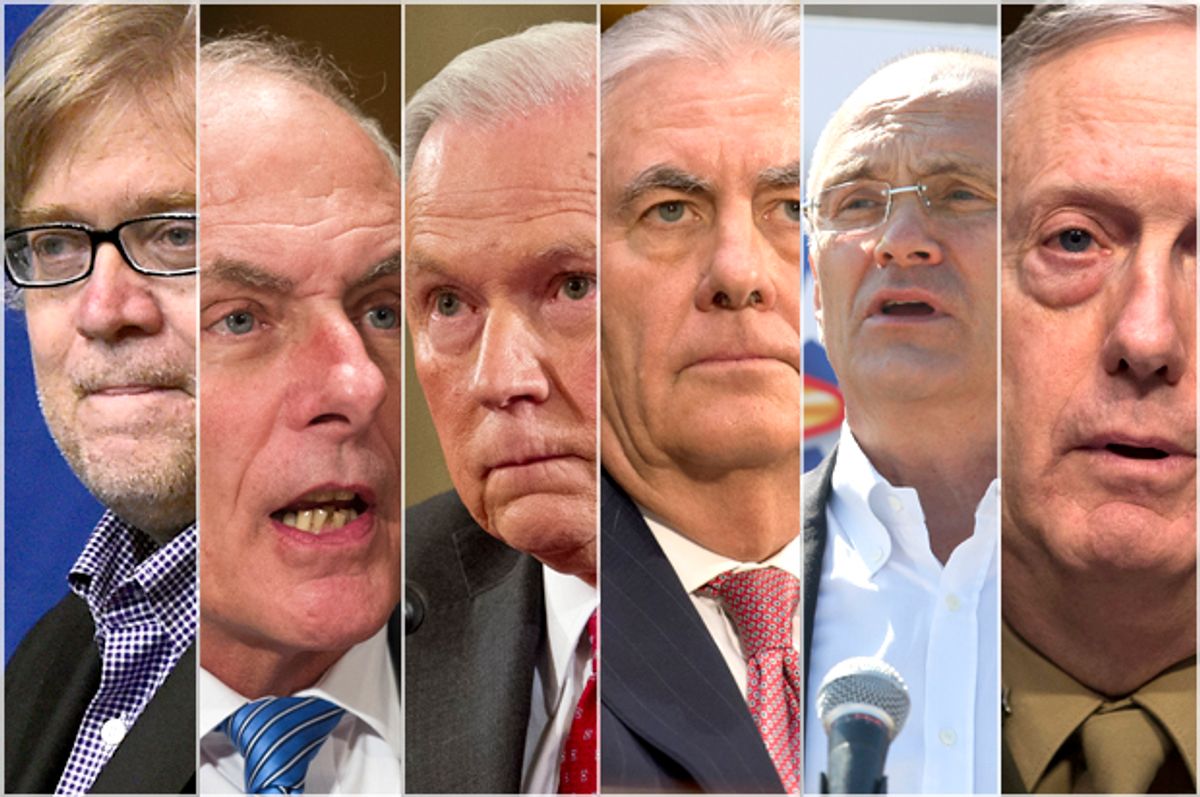 President-elect Donald Trump's decision not to appoint any Latinos to his Cabinet is drawing fierce criticism from Hispanics, who call it a major setback for the nation's largest minority group.

Trump announced former Georgia Gov. Sonny Perdue on Thursday as his choice to lead the Agriculture Department, ending hopes that the last open spot would go to a Latino nominee. The lack of Latino appointments means no Hispanic will serve in a president's Cabinet for the first time in nearly three decades.

The nonpartisan National Association of Latino Elected and Appointed Officials had started a public campaign to convince Trump to nominate former California Lt. Gov. Abel Maldonado, a Republican, to the post.

"This is a disaster and setback for the country," NALEO executive director Arturo Vargas said. "The next time a president convenes his Cabinet there will be no Latino perspective."

"Instead of assembling a talented and diverse Cabinet that would help advance the interests of all Americans, Trump has broken with the bipartisan precedent of past presidential administrations and has missed a major opportunity to shed the racial and ethnic divisiveness that were hallmarks of his presidential campaign," LULAC National Executive Director Brent Wilkes said.

Hilda Solis, who served as Labor secretary under President Barack Obama, said Trump's failure to select any Latino nominees is "more than an oversight."

"I don't think he forgot to appoint a Hispanic. That's unfortunate," Solis said.

Solis said having Hispanics in the Cabinet is important because they often step out of their department roles to offer different perspectives. "I did that often," she said. "Especially on immigration and health care."

Newly elected Sen. Catherine Cortez Masto, D-Nev., the nation's first Latina senator, joined in to denounce Trump's lack of Latino appointments. "After a divisive campaign that often demonized the Latino community, it is beyond disappointing that President-elect Trump has failed to nominate a single Latino for any of these key leadership posts in his administration," Cortez Masto said.

But New Mexico Gov. Susana Martinez, a Republican and the nation's only Latina governor, brushed off the appointment complaints.

"The president-elect gets to choose whomever he wants to choose for his Cabinet," said Martinez, who openly clashed with Trump during the presidential campaign. "Even though I'm a female Hispanic, I have always said that the person who has the greatest merit and who is the best and brightest should hold those positions."

For most of the nation's history, Hispanics have played informal, yet largely small roles in advising U.S. presidents. For example, Francisco Perea served as a delegate to the U.S. House of Representatives from New Mexico and was a close friend of President Abraham Lincoln. He was seated near the president's box at Ford's Theatre when Lincoln was assassinated.

But Latinos started to pressure for more visible representation in the executive branch shortly after World War II and the return of Mexican-American veterans.

Medal of Honor recipient Macario Garcia took a low-level position in the Veterans Administration at the urging of activists and President Harry Truman. Providencia Paredes and Carlos McCormick served as close aides to President John F. Kennedy and first lady Jackie Kennedy. They advised the couple on how to reach out to Latino voters in the 1960 campaign, when new Mexican-American voters helped swing a close election.

Dr. Hector P. Garcia, a Texas physician and another WWII veteran, was tapped by President Lyndon Johnson as the alternate ambassador to the United Nations to push better relations with Latin America. Later, President Jimmy Carter nominated Houston activist Leonel Castillo as commissioner of immigration for the Citizenship and Immigration Services.

But it wasn't until the tail end of President Ronald Reagan's second term that a Latino finally was appointed to a Cabinet position after Lauro Cavazos was confirmed as education secretary in 1988. The Democrat continued to serve for part of President George H.W. Bush's first term.

Since then Latinos have had a presence in Democratic and Republican presidential administrations from Surgeon General Antonia Novello, under Bush, to Labor Secretary Thomas Perez, under Obama.

Former Energy secretary and New Mexico Gov. Bill Richardson, whose mother was from Mexico, said the lack of appointments by Trump is telling.

"It is deeply disappointing that the president-elect is ignoring the fastest growing and economically dynamic community in the country," Richardson said. "Maybe it is payback for his dismal showing with Latinos in the general election."

Edward Lujan, a former chairman of the Republican Party of New Mexico and brother of former Interior Secretary Manuel Lujan Jr., said he also was disappointed there won't be any Hispanics in Trump's early Cabinet.

"But there are still 4,000 positions that have to be filled, some undersecretaries," Lujan said. "So, I think some Hispanics will get those."

This story corrects that Trump announced Perdue to lead Agriculture on Thursday, not last week.