Contraception access under Medicaid, Title X and even private insurance plans could all be in danger under Trump 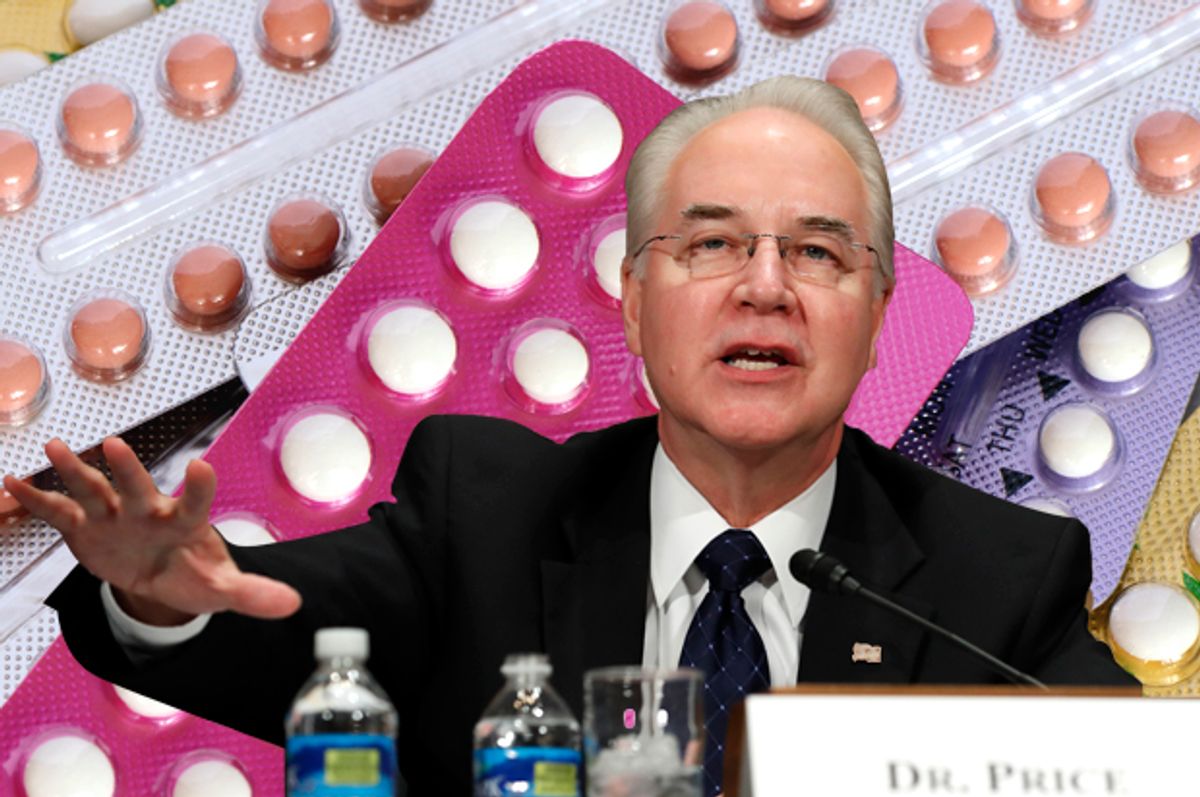 It remains to be seen whether House Speaker Paul Ryan and other congressional Republicans will be able to repeal the Affordable Care Act and gut Medicaid and Medicare. But even if congressional Republicans are unable to take a sledgehammer to our current health care system, Donald Trump's pick for secretary of the Department of Health and Human Services, Rep. Tom Price, could do some serious damage to the ability of Americans to receive basic medical care.

Price has been quite open about his hostility to contraception. As a member of Congress, he has voted to terminate Title X, a program that subsidizes contraception for low-income women. He voted against a law barring employers from firing women for using contraception. He hates Planned Parenthood and he really hates the federal regulation, under the Affordable Care Act, that requires insurance plans to cover contraception without a co-pay.

To justify his opposition to insurance coverage for contraception, Price sneeringly told ThinkProgress in 2012, "Bring me one woman who has been left behind" by plans that don't cover contraception adequately.

"Bring me one. There’s not one," Price insisted.

In fact, the cost of contraception is prohibitive and discourages consistent use for many women — and not just low-income women. As Adam Sonfield, the senior policy manager for the Guttmacher Institute, wrote recently, "There is emerging evidence that eliminating cost barriers has had a positive impact on contraceptive use."

For instance, studies before Obamacare went into effect showed that women were more likely to use contraception if they were fortunate enough to live in states requiring that insurance plans cover contraception. In two other studies that Sonfield cited, including one involving more than 600,000 women, the introduction of co-pay-free contraception was strongly linked to women choosing more effective birth control methods for longer periods of time.

Price has made it clear that he doesn't like women getting cheap or co-pay-free contraception. But how much power would he have, if confirmed as health secretary, to make it harder for women to receive birth control?

Quite a bit, it turns out, even if congress doesn't repeal the Affordable Care Act or pass legislation that defunds federal contraception programs.

“The category of things the HHS secretary has purview over is extremely broad," Sonfield said in a phone interview.

Sonfield outlined two possible ways that Price could proceed if he wanted to cut off coverage for contraception for women on private insurance plans: He could create "a big, sweeping exemption" or he could "get rid of the requirement altogether." Both options, Sonfield said, "are in the administration’s power.”

The first option would mean granting a employers broader powers to deny female employees access to contraception coverage. Right now if family-owned businesses or nonprofits don't want their insurance plans to cover contraception, their employees can receive such coverage from an alternative plan for no extra cost. Price could eliminate that protection, forcing women whose employers disapprove of non-procreative sex to pay full price for contraception or, in many cases, simply go without it.

As for the latter option, the problem is that the Affordable Care Act doesn't specifically name contraception as a covered service. The bill simply requires that preventative services for women are covered, but the U.S. Department of Health and Human Services has the responsibility to define what that means. Under the Obama administration, the department has identified nine services, including breast cancer screenings and contraception, as women's preventative services. But there's a distinct danger that under new leadership, contraception could be struck from the list.

Women who receive contraception from other means are also in danger of being cut off under Price. For instance, the Department of Health and Human Services administers Title X, a popular program that subsidizes contraception for women who can't receive it through Medicaid or private insurance. As a congressman, Price voted to completely eliminate  Title X, and as health secretary, he could throw up various roadblocks making it harder for women to access the program.

The Obama administration passed a last-minute regulation that makes it illegal for the health department to deny Title X funds to Planned Parenthood or other pro-choice organizations. But it's possible, and even likely, that Price will try to reverse that regulation or find a loophole.

Even if there's no cut in Title X funding, the health department could redirect grants to organizations not known for their family planning services, which could have the effect of denying access to contraception without explicitly doing so. Women who want contraception look first to family planning clinics. Moving Title X funding away from family planning clinics is somewhat like telling food-stamp recipients that they have to shop someplace other than the grocery store. It doesn't make sense, except as a legal mechanism for disabling the program.

Undermining contraception access for Medicaid patients is a little harder to pull off, as the law says that Medicaid patients have the freedom to choose their own providers. Congressional Republicans, including Price, have tried and failed to revise the Medicaid law, in an effort to block patients from selecting Planned Parenthood or other family planning clinics. And it remains the law that the Department of Health and Human Services is supposed to follow.

Still, Sonfield is worried that a Price-led health department "could try to reinterpret" the freedom of choice provision of the Medicaid law, coming up with some legal language to justify shutting Planned Parenthood out of the Medicaid program.

Sonfield emphasized that while all these options are on the table, none of them will be easy for Price to pull off, even with the immense powers of a health secretary.

“Legally speaking, a new administration is not supposed to be able to just get rid of a new regulation because they changed their mind or because they don’t like it," Sonfield said. "They have to have justification for it." But this "requires courts to agree what they did was wrong. That requires lawsuits.”

But as an anti-choice ideologue with a long record of anti-contraception activity, Price cannot be trusted to follow established regulations and legal precedent. Furthermore, this is not just about women's rights. Price's attitudes about contraception suggest a broader tendency — one found more generally among many Republicans — to ignore the importance of empirical evidence in determining health care policy.

"Contraception helps everyone, because when women can plan the timing and spacing of pregnancies, their own health and the well-being of their families improve," said Dr. Anne Davis, consulting medical director for Physicians for Reproductive Health, in a press release on Wednesday. Referring to the fact that Price is a physician, she continued: "It’s difficult to comprehend how a medical professional could work to withhold birth control — something so beneficial to women that the Centers for Disease Control lauded it as one of the signature health achievements of the 20th century."