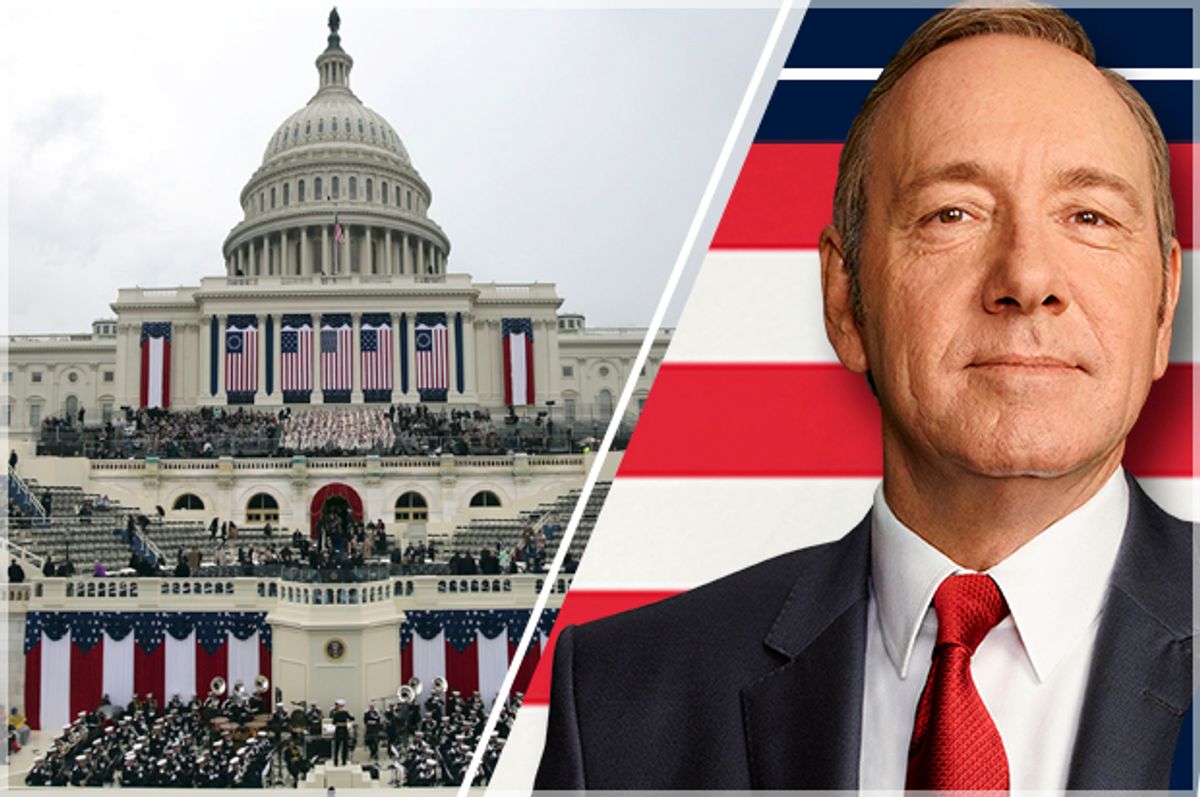 “Power is a lot like real estate: It’s all about location, location, location,” said Frank Underwood in the series premiere of “House of Cards" on Netflix. “The closer you are to the source, the higher your property value.”

Pondering that statement, Netflix’s choice to reveal the drama's fifth season premiere date a little over an hour before Donald Trump was sworn in as the 45th president of the United States is a savvy and thematically appropriate marketing move. Presumably a large portion of the "House of Cards" target audience is contemplating the troubling similarities between Frank Underwood's fictional administration and the one that just took over in the real world's Washington. Kevin Spacey’s presidential demagogue would likely approve of the streaming service using our collective angst as a hook.

But it’s the way in which Netflix's social media team did so that commanded our attention on Friday morning.

We make the terror. pic.twitter.com/VpChwGOSMj

That line comes from the closing moment of the drama’s season 4 finale, as Underwood and his wife Claire (Robin Wright) are witnessing the execution of a man held hostages by terrorists. He says it to the viewers moments after addressing the nation and declaring total war on extremism around the globe.

“That’s right,” he drawls, breaking the fourth wall — along with Claire, a first for her. “We don’t submit to terror. We make the terror.”

Underwood is a nightmarish politician, a former congressman who surfed a tidal wave of deceit and betrayal to ascend to the highest position in the land, even committing murder along the way. Spacey's character was a fascinating fiction in the opening seasons, although the actor's unctuous tone became rote and soporific over the course of the fourth season. (As his performance's appeal waned, however, Wright’s skills shone even brighter.)

But it’s the upside-down American flag that either struck viewers as an audacious commentary on the events transpiring on the Capitol steps or a disrespectful rebuke. Their take depended upon which side of the political spectrum they inhabited.

At its most basic, the "House of Cards" promo co-opts a pessimistic postelection meme and adds in the timeless creepiness of children’s voices reciting the Pledge of Allegiance. Ironic juxtaposition is shockingly powerful emotional prod. Just ask anyone who saw that teaser while recovering from witnessing Trump rail against American carnage in his “America first”-themed inaugural speech, which urged (or warned) Americans that unity can only be achieved by allegiance.

We can only guess that Spacey's POTUS would have approved of the new president's inauguration speech. Back in August the actor told The Hollywood Reporter, "President Underwood would willingly stand behind Donald Trump — in order to push him in the right direction."

Had Netflix had dropped this “House of Cards” promotion on any other day, it would still be appropriate. After all, an upside-down flag is a distress signal, and the nation over which Frank Underwood presides is in turmoil and sending out an SOS to the world.

We may well be doing that long before the new season of “House of Cards” premieres on May 30.