With a hypernationalist address and lots of pomp, the new reality of President Donald Trump is officially here 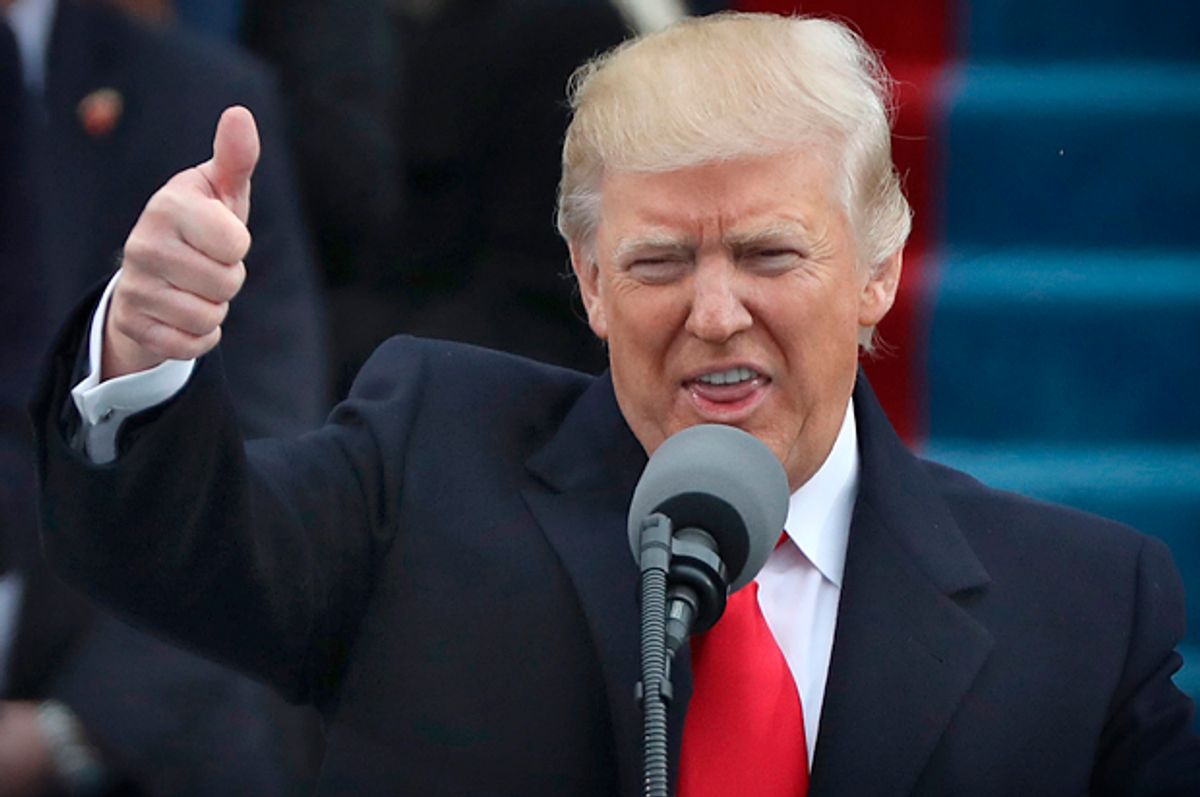 WASHINGTON -- So I guess we’re really doing this. Donald Trump is now the 45th president of the United States. Even with two months of insane interregnum to prepare for that inevitability, I find it’s still difficult to believe that I just wrote that sentence.

Trump’s inauguration couldn’t help but be a bizarre event. All the ridiculous pomp and ceremony of the quadrennial ritual was made still more surreal by the fact that it was deployed in honor of a politician who got caught boasting about committing sexual assault. “Ruffles and Flourishes,” but for the guy who implored the Russian government to commit cyber-espionage on his political opponent.

Trump’s inaugural address was, in keeping with the theme, completely ill-suited to the event. Inaugural committee chairman Sen. Roy Blunt, R-Mo., kicked off the event with a callback to inaugural addresses of the past, referring to the ceremony as “not a celebration of victory, [but] a celebration of democracy.” Yet the address Trump gave was, more or less, an adaptation of his relentlessly self-congratulatory campaign rhetoric.

He hammered away at the “America First” hypernationalist themes that he ran on, at one point saying, “When you open your heart to patriotism, there is no room for prejudice” — which is a gross misreading of both patriotism and prejudice. He addressed his voters as “part of a historic movement the likes of which the world has never seen before.” He concluded his first inaugural address the exact same way he concluded his campaign speeches — with a lusty recitation of his campaign slogan. Trump managed to refrain from chanting, “Lock her up,” but his supporters in the crowd took the initiative.

While the ceremonial proceedings were unfolding around the Capitol, the rest of Washington welcomed its new president with a blizzard of protests. Marchers coursed through the downtown streets, waving placards and denouncing Trump as a “fascist” while red-capped Trump supporters exhorted them to get real jobs. Protesters formed blockades at security checkpoints, leaving inauguration attendees thronged in the sidewalks. A surprisingly well-organized free weed giveaway in Dupont Circle was put together by marijuana legalization activists who (rightly) view the incoming administration as a threat to their cause.

With the official business behind us, now begins the Trump administration. Those of us who never thought this moment was possible now have to reckon with what lies ahead. And all indications are that the Trump presidency will be a bad one.

I say that partly as someone who frets incessantly over the health and longevity of the progressive policy achievements of the Obama era. But just think about what has happened in the two months between the election and Friday’s inauguration. There has been no orderly transition, no cooling-down period and no indication from the new administration that it’s in any way prepared to assume control of the government. On the night Trump won election, I wrote that it was “impossible to overstate how colossal a fuck-up this is.” Nothing that’s transpired since then has given me cause to back off my initial assessment.

Trump has picked Cabinet nominees who don’t seem to know what they’re supposed to be doing. The administration is taking power with hundreds of key positions unfilled. Our new president is, at this moment, deriving financial benefit from his shares in his company that he refuses to divest, setting up innumerable conflicts of interest and potential constitutional crises. Hovering above all this is a slowly unfolding investigation by several intelligence and law enforcement agencies into links between the Trump campaign and Russian officials.

What reason is there to think that the polarization, acrimony, incompetence and persistent disregard for political norms will cease now that Trump is actually in the White House? The next four years will be a persistent test of our democratic institutions and our commitment to liberal, pluralistic governance. The struggle starts today, now that we are officially living in the era of President Donald Trump.