Donald Trump's far-right inauguration: Meet some of the more extreme faith leaders at the event 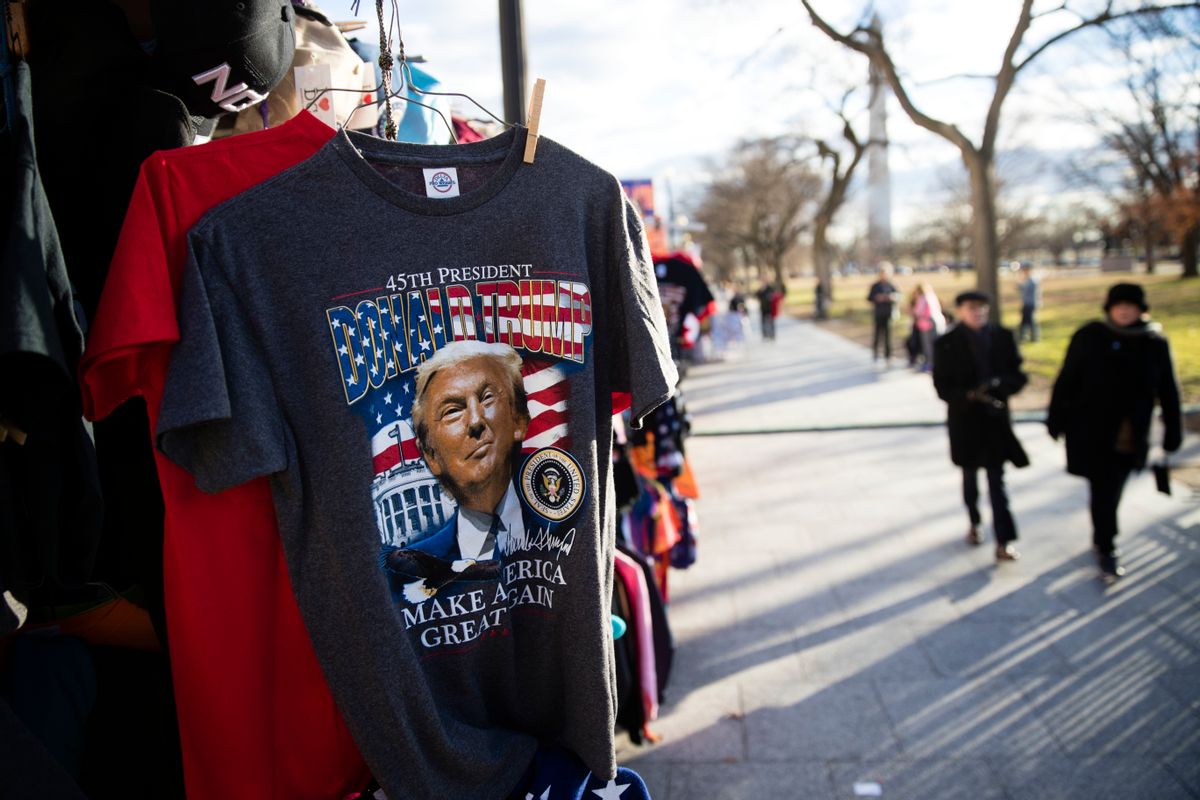 Donald Trump’s inaugural committee has announced that six faith leaders will take part in his swearing-in ceremony by offering prayers or delivering readings.  Among them are Rabbi Marvin Hier, founder and dean of the Simon Wiesenthal Center, and Bishop Wayne Jackson, who draped a prayer shawl from Israel over Trump’s shoulders when Trump made a campaign stop at his Great Faith Ministries International church in Detroit for a scripted interview. Here’s more on the other announced speakers: Paula White, Franklin Graham, Samuel Rodriguez and Timothy Dolan.

Paula White has been in Trump’s “Amen Corner” of prosperity gospel preachers for a long time; she has said that she gave Trump a Bible signed with a “prophetic word” by Billy Graham for his 60thbirthday.

Think of Paula White’s ministry as the church version of Trump University. She preaches the prosperity gospel, an approach to Christianity that is, shall we say, unorthodox. Prosperity-gospel preachers teach that God wants people to be rich, and that he makes them wealthy as a sign of his blessing and favor; the richer you are, the more God loves you…These preachers also teach that the way to become wealthy is—you guessed it!—by giving them money. If you make a “seed offering”—and the bigger the better—then preachers like White say the Lord will repay your generosity with bounteous riches.

The Florida-based White helped organize a group of prosperity gospel preachers and televangelists who met with Trump in September 2015 and spoke at a Trump rally in Orlando in March. As we’ve noted, it’s not terribly surprising that Trump and White would find an affinity for each other, since she and other prosperity gospel promoters preach that wealth is a sign of God’s blessing and he told voters that his being rich was proof that he could lead the country.

While promoting his 2006 book “Why We Want You To Be Rich,” Trump appeared on Paula White’s television show, where he told White that God “blessed” wealthy people like himself with “a certain something” and a good brain and that in order to succeed in business, “God has to have blessed you with a good mind or, at least, a business mind.”

White was one of the money-making evangelists who reportedly stonewalled an ultimately inconclusive investigation by Sen. Chuck Grassley’s Senate Finance Committee, citing religious freedom to justify their refusal to provide full information about their finances.

Never Trump conservative Erick Erickson has criticized White as “a Trinity-denying heretic” and said “it should be a pretty damn big deal” that Trump is inviting her to pray at the inaugural.

Franklin Graham, son of the iconic evangelist Billy Graham, is a more intensely anti-gay right-wing version of his father, and reflects the continuing spiral of America’s right wing into anti-Muslim conspiracy-theory paranoia.

Like Trump, Graham is a fan of Russian strongman Vladimir Putin, praising Putin’s anti-gay policiesand defending his support for the Assad regime in Syria. Graham went to Russia in 2015, where he praised Putin while criticizing secularism in America. While in Russia, Graham told a reporter that President Obama was “leading America down the wrong road” and “taking a stand against God.”Graham also planned to host a conference in Moscow with the Russian Orthodox Church to address anti-Christian persecution, but had to cancel after Putin outlawed evangelism from Christians who aren’t members of the Orthodox church.

Although Graham maintained that he was not formally endorsing a presidential candidate in 2016, he held rallies around the country during which he made it clear what he thought Christians’ duty was at the ballot box. Graham, who has said the advance of legal equality for LGBT people is a sign of the coming End Times and invites the judgment of God, repeatedly said that 2016 was the last chancefor Christians to save America from godless secularists and the “very wicked” LGBT agenda being promoted by the Obama administration.

Graham was among the Religious Right leaders who spoke up for Trump when the tape of him bragging about sexually assaulting women was released, decrying “the godless progressive agenda of Barack Obama and Hillary Clinton” and saying the Supreme Court was the most important issue for Christians when voting. When Trump called for “a total and complete shutdown of Muslims entering the United States until our country’s representatives can figure out what is going on,” Graham defended him and said he’d been making the same argument “for some time.”

Following the election, Graham addressed a Trump victory rally and claimed that Trump had been elected thanks to God’s intervention.

In April Graham called the separation of church and state “a lie that the enemy uses to try to keep your mouth shut” and declared, “There’s no difference between secularism and communism. They’re both godless. Both are godless. And godless secularism is now taking control of our governments.” In response to the Sandy Hook massacre in 2012, Graham said, “We’ve taken God our of our school, we’ve taken him out of our government and now we seem shocked at all of these things. Why are we shocked? We shouldn’t be shocked. This is what happens when a society turns its back on God.”

Samuel Rodriguez, who heads the National Christian Hispanic Leadership Conference and is a regular speaker at Religious Right gatherings, has fostered a media image as a nonpartisan moderate while simultaneously urging Hispanic voters to support right-wing candidates and Religious Right causes, and even filming a video promoting the Republican Party’s faith outreach project. In May, for example, he said it would be “morally reprehensible” for Christians to vote for a candidate who supports Planned Parenthood, saying they would need to repent.

Rodriguez, who served on Marco Rubio’s faith advisory board, was initially critical of Trump’s anti-immigrant rhetoric. In July 2015 he joined the Southern Baptist Convention’s Russell Moore in a Wall Street Journal op-ed denouncing Trump and declaring, “Those who see immigrants as easy targets for scaremongering will find that they will lose more than the Hispanic vote; they also will lose those who sing, maybe in different languages, from the same hymnbook.” In May 2016, after Trump provided an NHCLC conference a perfunctory video that included no apology for his anti-immigrant demagoguery, Rodriguez said he had “no plans on endorsing Donald Trump whatsoever.” But Rodriguez threw immigrant families under the wheels of the Trump bus after the candidate’s big meeting with evangelical leaders in June, praising Trump’s comments about abortion, religious liberty and the Supreme Court.

Rodriguez had previously given Trump political cover by saying he is not a racist and telling Christians that getting conservative justices on the Supreme Court is more important than immigration reform.

Rodriguez pushes the Religious Right line that the religious freedom of Christians is under threat in America. In 2012, after President Obama spoke in favor of marriage equality, Rodriguez said the promotion of marriage equality is “an attempt to silence the church of Jesus Christ.” He believes there is a spiritual battle under way to “annihilate” the family and warns that Christians cannot sit out elections because “today’s complacency is tomorrow’s captivity.”

In September, as part of the Religious Right operation My Faith Votes, Rodriguez warned a discouraged voter that “staying home may very well jeopardize my ability as a pastor to reach the people with the loving gospel of Jesus Christ.” He also said voters who don’t like either candidate should vote for “the party platform that best will protect your right to be a Christian and reach others with the loving, grace-filled message of Jesus Christ.”

Rodriguez also promotes right-wing positions on economics and government regulation. During the congressional battle to pass health care reform, Rodriguez took part in a Religious Right “prayercast” that asked God to defeat the legislation. He has signed onto declarations that oppose progressive taxation and embraced right-wing rhetoric about people being “enslaved” by government and “uber-entitlements.” He has promoted the Koch brothers’ LIBRE Initiative, which is meant to proselytize an anti-government gospel of economic libertarianism to Latinos, saying in a LIBRE video that it is anti-Christian and anti-American to “punish success”—right-wing speak for progressive taxation.

In his LIBRE video, Rodriguez embraced a prosperity gospel view of wealth. “It’s anti-Christian to think that people that have been blessed…that they are wrong….Blessed people are a manifestation of scripture….In scripture there is an incredible amount of support for the idea that, yes, provision and abundance comes from God…”

Rodriguez made the stridently anti-LGBT Liberty Counsel the official policy arm of the NHCLC, which went international in 2014 when it merged with an evangelical coalition in Latin America. Last year Rodriguez hailed controversial preacher Cindy Jacobs as “a legitimate prophet of God” and “one of the most anointed voices, prophetic voices in the Kingdom of God.”

New York Archbishop Timothy Dolan criticized Trump’s nativist rhetoric in 2015, but more recently has praised Trump’s positions on abortion and “religious liberty” and has said since the election he looks forward to the appointment of Supreme Court justices “who will reform the injustice and travesty of Roe v. Wade.”

Dolan hosted the meetings at which the 2009 Manhattan Declaration was created, and he was among its original signers. The declaration is a manifesto for Christian conservatives who declare that when it comes to opposition to abortion and marriage equality, “no power on earth, be it cultural or political, will intimidate us into silence or acquiescence.” Regarding marriage specifically it says, “No one has a civil right to have a non-marital relationship treated as a marriage.” And it vows civil disobedience, saying:

Because we honor justice and the common good, we will not comply with any edict that purports to compel our institutions to participate in abortions, embryo-destructive research, assisted suicide and euthanasia, or any other anti-life act; nor will we bend to any rule purporting to force us to bless immoral sexual partnerships, treat them as marriages or the equivalent, or refrain from proclaiming the truth, as we know it, about morality and immorality and marriage and the family. We will fully and ungrudgingly render to Caesar what is Caesar’s. But under no circumstances will we render to Caesar what is God’s.

When Dolan was chosen to be president of the U.S. Conference of Catholic Bishops in 2010, The New York Times described it as a “surprise move that reaffirmed the conservative direction of the Roman Catholic Church in America.” In 2011, Dolan wrote to President Obama both privately and publicly complaining that the administration’s decision not to defend the constitutionality of the Defense of Marriage Act would “escalate the threat to marriage and imperil the religious freedom of those who promote and defend marriage.”

In a joint statement with Archbishop Salvatore Cordileone in response to the Supreme Court’s 2013 decision overturning part of the Defense of Marriage Act , Dolan called the ruling “a tragic day for marriage and our nation.” During an interview that year Dolan said gays and lesbians are “entitled to friendship” with each other but not “sexual love.”

When U.S. Religious Right groups gathered at the UN this year to partner with a group of the world’s most repressive regimes to resist international recognition for the human rights of LGBT people and their families, Bishop John O’Hara of the Archdiocese of New York assured the gathering that they had Dolan’s “enthusiastic support.”

Documents released in 2013 showed that Dolan, when archbishop of the Archdiocese of Milwaukee in 2007, had asked for and received permission from the Vatican to, as The New York Times reported, “move nearly $57 million into a cemetery trust fund to protect the assets from victims of clergy sexual abuse who were demanding compensation.”