Mexico would have more to lose in a trade war, but consumers on both sides of the border would feel the impact 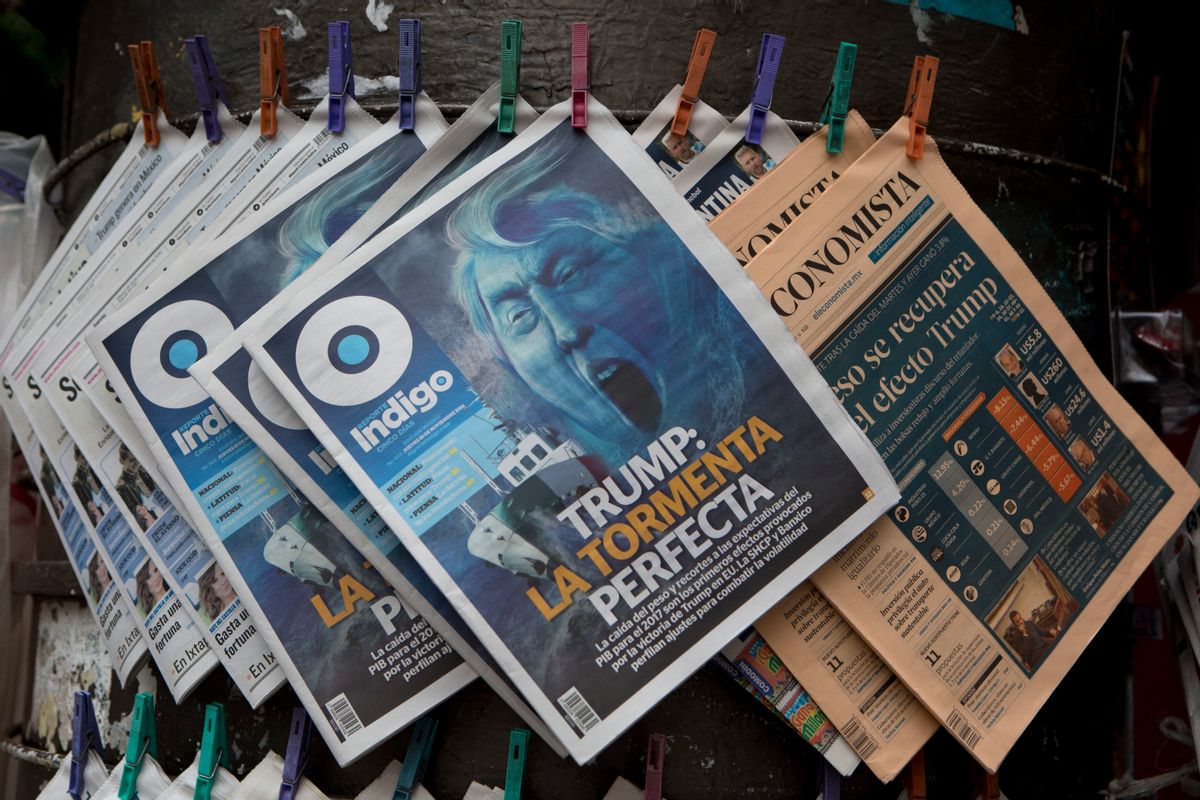 FILE - In this Nov. 10, 2016 file photo, a newspaper headline reads in Spanish: "Trump: The Perfect Storm," for sale at a news kiosk in Mexico City. The article's subtitle points to the fall in the value of the Mexican peso and cuts to Mexico's GDP expectations for 2017 as the first effects on Mexico provoked by the election of Donald Trump as the next U.S. president. (AP Photo/Rebecca Blackwell, File) (AP)
--

President-elect Donald Trump has made overhauling global trade relations a primary focus of his campaign, feeding on sizable public discontent for pacts that many Americans believe have done more harm than good to the U.S. economy and labor market.

Trump’s pick to become the nation’s next commerce secretary, billionaire investor and job exporter Wilbur Ross, has vowed to overhaul the North American Free Trade Agreement as part of Trump’s larger strategy of bringing back manufacturing jobs lost to the forces of automation and globalization to American shores.

“All aspects” of the 23-year-old preferential trade pact are on the table, Ross said during Senate confirmation hearings Wednesday, adding, “NAFTA is logically the first thing for us to deal with.”

But Trump’s proposals for steep import tariffs are so radical it’s freaking out the U.S. business community and could lead to a showdown with Republican lawmakers whose backers depend on low-cost access to foreign markets. Mexico has benefitted greatly from NAFTA, but the benefits are in both directions across the border.

Despite the trade deficit that the U.S. has with Mexico, American companies exported about $270 billion worth of goods and services to its southern neighbor, according to the latest trade figures, from 2015. These American exports included made-in-the-U.S heavy machinery, vehicles and petroleum products. Mexico is also the third-largest market for U.S. agricultural products including corn, soybeans, dairy, pork and beef — the kind of things produced in areas of the country that helped get Trump elected. Anything Trump wants to do on trade that hurts the Farm Belt will face considerable pushback from congressional Republicans.

If the president and his GOP allies cause a trade war with Mexico, the effects would be felt by consumers in both countries. Trump’s proposed 35 percent import tariff on Mexican imports would raise U.S. prices for American-made cars and electronics because of the higher cost of the parts produced in Mexico and shipped to manufacturing facilities in the U.S., according to Robert Blecker, professor of economics at the American University in Washington D.C. who specializes in North American economic integration.

“For both the U.S. and Mexico, it’s challenging because if you start putting tariffs on imports from the other country, you’re essentially putting tariffs on some of the inputs of many of the things you want to make,” Blecker told Salon.

Mexico could fairly easily retaliate with tariffs on goods resulting in regional impacts across the U.S. In 1996, for example, Mexico shocked American wine and spirits makers by imposing a temporary 20 percent retaliatory tariff on U.S. whiskey and wine products after the U.S. imposed tariffs on Mexican-made brooms. That dispute, which was later resolved, is minor compared to what could happen if Trump gets his way. In a trade war with Trump, Mexico would likely slap taxes almost immediately on many of the American products purchased by its growing upper-middle class, like minivans, wines and distillates, and luxury goods.

Mexico could also respond to Trump with threats about U.S. agricultural products like oranges or soybeans in order to sway lawmakers from key producing states to push back against Trump.

“They can threaten tariffs on corn from Iowa, and see if Sen. [Chuck] Grassley doesn’t change his mind on an issue,” Blecker told Salon, referring to the Republican legislator who endorsed Trump for president last year.

If the trade war expanded to encompass agricultural products, then things would start to get really messy.

U.S. consumers reap NAFTA’s benefits from nearly every type of produce found in their grocery store aisles. But in a trade war with Mexico, U.S. growers could try to compel lawmakers to re-impose tariffs on Mexican agricultural products that were lifted after NAFTA went into effect in 1994, a move that would raise prices in the U.S. but that would benefit U.S. growers. Mexico could retaliate with tariffs against U.S. agricultural goods, though it would risk an explosive reaction similar to the looting and riots that occurred after the Mexican government raised gasoline prices by 20 percent this year. Mexico, for example, relies heavily on U.S. corn and animal feed to keep prices low for tortillas — a staple of the country’s poor — and meat.

A Mexican-U.S. trade war would be messy, with a hodgepodge of tit-for-tat threats and retaliatory tariffs that would increase prices on many goods sold on both sides of the border. So what are the alternatives?

The answer could lie in part — for better or worse — with Luis Videgaray, who earlier this month was appointed Mexico’s foreign minister. Videgaray resigned as finance minister after the public outcry over Trump’s October visit to Mexico City. President Enrique Peña Nieto, whose approval rating in his country is lower than Trump's, was harshly criticized for not pushing back against Trump’s pledge to force Mexico to pay for his proposed $25 billion 1,900-mile wall to curb illegal crossings.

But Videgaray may also be Trump’s closest government confidant in Mexico City, someone who could help negotiate some kind of arrangement that allows Trump to tweet out some victory on U.S.-Mexico trade while avoiding any major disruptions that would affect consumers on both sides of the border.

“There is a very wealthy elite in Mexico that is similar to all the Wall Street people that Trump is appointing, and Videgaray certainly represent that kind of elite,” Blecker said. “Maybe with people like that they can come up with some kind of deal that lets Trump say he’s renegotiated NAFTA without major disruptions in trade.”

Now the big question regarding global trade is how much Trump can do on his own and how willing Congress, companies and global trade partners are to meet his demands. Mexico isn’t even the biggest trade challenge; the U.S. trade deficit with China is nearly seven times larger than the one the U.S. has with Mexico while the value of U.S. exports to Mexico is 1.7 times larger than that of its exports to China.

“The only clarity to emerge over the past two months is that, as president, we can expect Trump to be every bit as volatile as he was during the campaign,” Michael Pierce, an analyst for Global Economics, wrote in a research note on Thursday. “His threats may have some effect, but the main impact on the rest of the world will depend on actual policies.”

Then again, Trump’s actual policies may differ greatly than the ones he’s promised after he’s forced to confront the delicate complexities of global trade relations.