We need the truth about Trump and Russia now 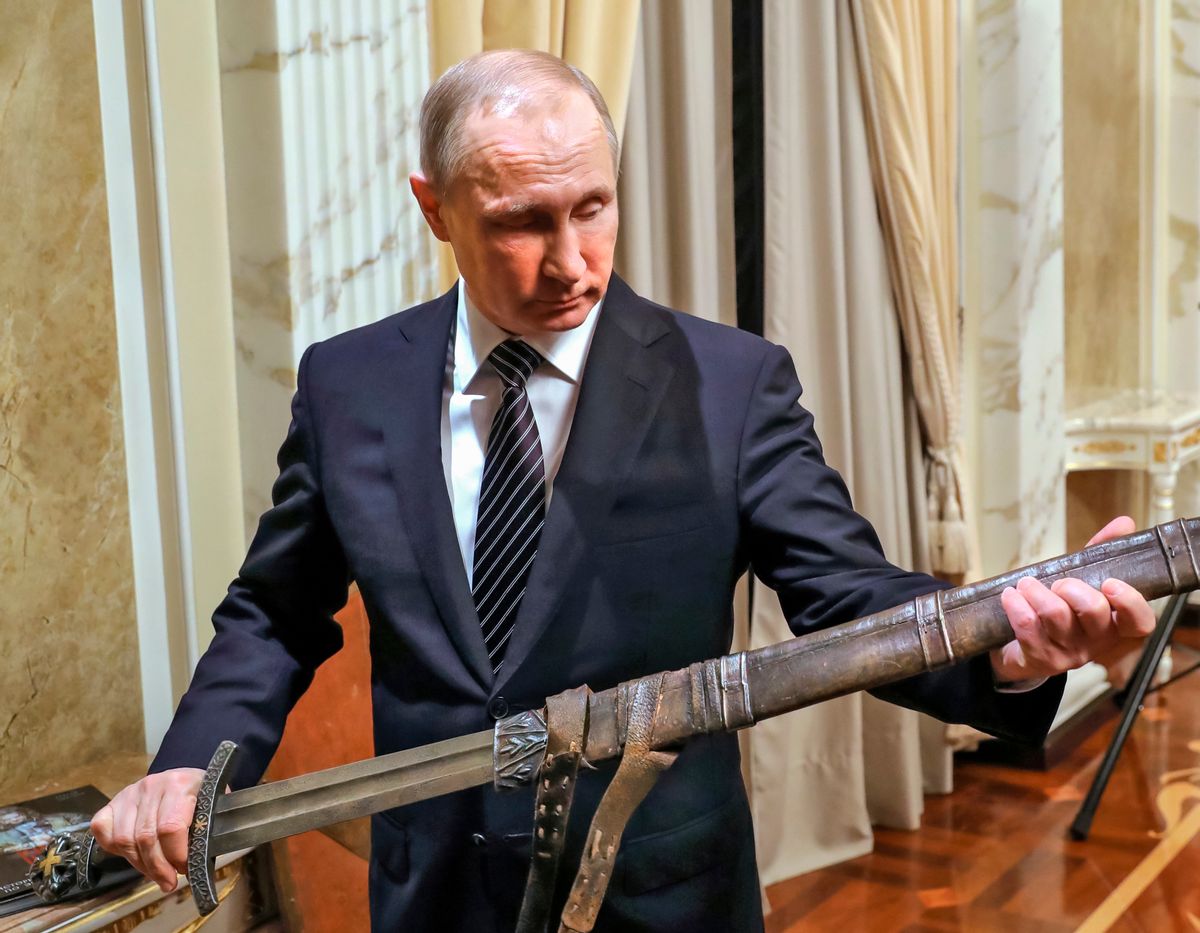 Over the holidays, John Farrell, author of an upcoming biography of Richard Nixon, wrote an op-ed piece in The New York Times confirming what many of us have known for nearly 50 years: In the fall of 1968, Nixon, the Republican candidate for president, deliberately torpedoed President Lyndon Johnson’s efforts to cease the bombing of North Vietnam and begin peace talks to end the Vietnam war.

Johnson was not running for re-election, but his vice president, Hubert Humphrey, was the Democratic candidate for the White House — and Nixon was determined to keep Humphrey from reaping the benefits of good news from Southeast Asia.  In the course of researching his Nixon book, Farrell found a cache of notes from Nixon aide H.R. Haldeman showing “that Nixon directed his campaign’s efforts to scuttle the peace talks… On Oct. 22, 1968, he ordered Haldeman to ‘monkey wrench’ the initiative.”

Nixon won the election and until the end of his life denied he had interfered. But, Farrell notes, “Nixon had cause to lie. His actions appear to violate federal law, which prohibits private citizens from trying to ‘defeat the measures of the United States.’”

Johnson believed Nixon had committed treason, but at the time he and his aides decided they lacked sufficient proof. History has since provided the evidence.

Now we face another electoral crisis of perhaps even greater significance. As the former diplomat James Bruno sums it up in Washington Monthly, “The United States has just endured a carefully planned, well-orchestrated assault against its democratic form of government in the form of a grand cyber-theft of information and targeted release of that information.” More specifically, Bruno quotes from the report in which 17 US intelligence agencies unanimously concluded, “Russian President Vladimir Putin ordered an influence campaign in 2016 aimed at the US presidential election. Russia’s goals were to undermine public faith in the US democratic process, denigrate Secretary Clinton, and harm her electability and potential presidency. We further assess Putin and the Russian government developed a clear preference for President-elect Trump. We have high confidence in these judgments.”

Read that again slowly and carefully: The intelligence community is saying that a foreign country, Russia, deliberately interfered with and corrupted our electoral process to favor the election of Donald Trump. Further, aides to Trump are said to have been in contact with Russian officials throughout the campaign and the presidential transition. (In the Jan. 12 Washington Post, columnist David Ignatius reported, “According to a senior US government official, [national security adviser Michael] Flynn phoned Russian Ambassador Sergey Kislyak several times on Dec. 29, the day the Obama administration announced the expulsion of 35 Russian officials as well as other measures in retaliation for the hacking. What did Flynn say, and did it undercut the US sanctions?”)

Of course, Trump and his allies say the intelligence community not only is wrong but should not be trusted. Nevertheless, the die is cast: Either Trump and friends have engaged in treasonous acts or America’s intelligence officials are guilty of a colossal lapse in judgment — or worse, a conspiracy against Trump. Either way — whether any of these allegations are true or false — the entire matter must be investigated thoroughly and immediately. The dark clouds hovering over American politics must be cleared up. Left unresolved, the allegations present a clear and present danger, a ticking time bomb that could explode and bring an end to America’s nearly 250-year experiment in self-government.

While there have been plans announced for Senate and House hearings into this constitutional crisis, these easily can be stalled and manipulated for partisan purposes. Given the Republican Party’s hardcore will to power and that it will soon exercise monopoly control over all three branches of government — not to mention their track record over the past eight years — it is hard to identify which GOP members of Congress are likely to put country ahead of party and let an investigation go where the facts lead. In addition, with some notable exceptions, the minority Democratic Party appears dispirited and disorganized, if not feckless, and unable to thwart Republicans determined to bulldoze a serious investigation.

No, this crisis requires a more thorough, bipartisan and select committee or commission — not unlike the 9/11 Commission — that has adequate staff, funding and subpoena power to conduct as thorough a probe as possible.

In whatever form it takes, said investigation also must include a careful examination of action — or inaction — by the Federal Bureau of Investigation. The Justice Department’s inspector general has begun a probe but it also should be within the purview of a select committee, commission or special prosecutor.

Why did the FBI seem to favor pursuing Hillary Clinton’s emails over tracking down whatever could be learned about Russia’s involvement in our election? Why did it drag its feet when it had evidence that the Democratic National Committee was being hacked — was it the agency’s fault or the DNC’s? How the FBI notified the DNC in the first place — with a phone call to an outside tech vendor — is right out of a Marx Brothers comedy. And why did FBI Director Comey fail to take action when he had in his hands the dossier ex-MI6 intelligence operative Christopher Steele had assembled on rumors that Russia possessed incriminating evidence on Trump’s business dealings and private life?

If real, they could be used to pressure — blackmail — Trump into obeisance. If not real, was Russia deliberately feeding Steele false information – “a carefully constructed attempt,” in the words of conservative journalist and Russia expert David Satter in National Review, “to disrupt American political life for years to come.”

Trump’s tax returns should be included in the investigation as well. He can no longer use the flimsy excuse of an audit. They must be subpoenaed and released, for within them may be evidence of whether or not the president-elect’s company has sizable debt with Russian banks and investors that could be used as leverage against him. Trump denies Russian investments but as his son, Donald Jr., famously told a 2008 real estate conference, “Russians make up a pretty disproportionate cross-section of a lot of our assets… We see a lot of money pouring in from Russia.”

What’s more, Megan Twohey and Steve Eder at The New York Times reported late Monday, “Mr. Trump repeatedly sought business in Russia as far back as 1987, when he traveled there to explore building a hotel. He applied for his trademark in the country as early as 1996. And his children and associates have appeared in Moscow over and over in search of joint ventures, meeting with developers and government officials.” Trump told biographer Michael D’Antonio, “I know the Russians better than anybody.”

Common sense suggests one reason Trump has so doggedly and furiously attacked the intelligence community — and persisted in flattering Vladimir Putin — is that he doesn’t want known the extent to which he is financially embroiled with Russian oligarchs. Or perhaps he really is serious about wanting to draw the Russians into a closer embrace so that they cease and desist from efforts to disrupt the Western alliance.

Yet how are we ever going to know without an independent investigation? We may never learn the complete truth, but if allegations are proven false, the inquiry may help clear Trump and his associates of the taint that has marked his election and transition and which certainly will be the elephant in the Oval Office once Trump occupies it.

Then it will need to be determined who set out to smear his record and why. Someone — perhaps among his Republican opponents in the primaries, or among Democrats eager to cripple him once he got the nomination — went to great lengths to tie Trump to some nasty stuff.

But what if much that has been claimed is true? Then we will have in the White House a president who has betrayed the American people and whose every motive and action must be challenged. Impeachment is not out of the question.

This is deadly serious business. It is a heinous threat not only to America’s future but to other Western democracies, fragile as they are just now. Putin and his kleptocrat cronies aren’t limiting their cyberwarfare and other meddling to the United States but encouraging right-wing populism that actively undermines member nations of the European Union and the NATO alliance as well. So far, Trump seems to be acquiescing to this and to other Russian encroachments around the world. And several people around him — close aides such as Gen. Mike Flynn, his national security adviser; and “The King of K Street,” Paul Manafort, his onetime campaign manager — are reported to have had business ties to Putin’s world.

The truth must be known. Left to fester in the dark, lingering suspicions will hang over our politics like a poisonous smog. We will become a society marked by permanent and penetrating distrust, by whispered allegations and rumors, by ill will and a lust for unbridled power. We do not exaggerate when we say this is the most critical moment for the United States since politics failed in the 1850s and the thunderclouds of civil war spread north and south until the nation was engulfed and split asunder.

We cannot wait for history’s judgment. We must find out now. Who in Washington today are the men and women of courage who will rise above partisanship and join as patriots in calling for a thorough and honorable public scrutiny of these disturbing events?