With his role as the baddie in “The Daughter,” Paul Schneider completes a hat trick of films: "The script has to be gasoline and I have to be a match, then we get the fire afterwards"

With roles in 3 movies in 6 months Paul Schneider talks drinking, tattoos and telling the truth as much as possible 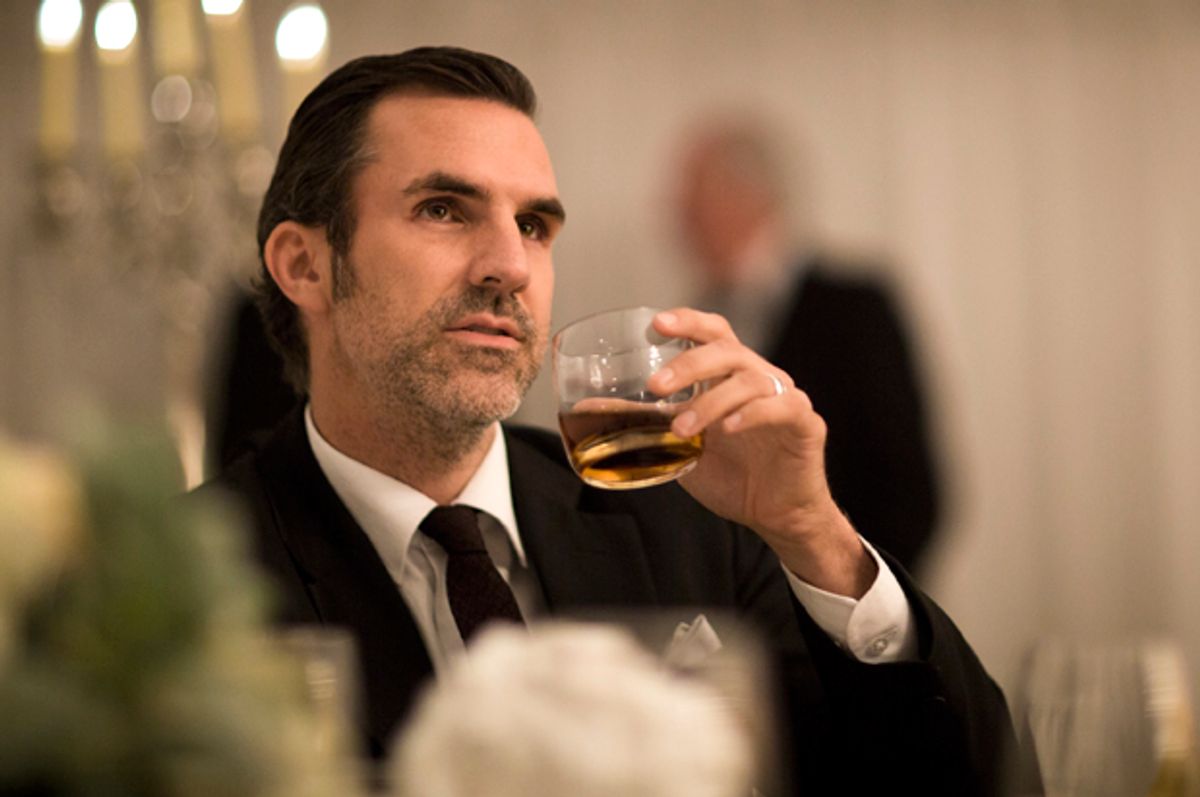 In “The Daughter,” Paul Schneider stirs up trouble as Christian, a man returning home for his father Henry’s (Geoffrey Rush) wedding to a much younger woman. The film — the feature directorial debut of Simon Stone, who adapted Ibsen’s “The Wild Duck” — is a juicy, engrossing chamber drama about bad behavior. And Christian is one of the chief instigators. He “can’t handle his liquor,” or it turns out, keep secrets, as when he reveals a long-buried truth that tears two families apart.

The magnetic Schneider is charming, insouciant and snaky as Christian, and the actor plays the role with noticeable aplomb. Playing a prodigal son who becomes an unwelcome guest, Schneider provides an adroit performance that shifts from friendly to fiendish — sometimes within the same scene.

Schneider has become in-demand character actor since he made the critically praised (and underseen) indies “George Washington” and “All The Real Girls,” with David Gordon Green. He garnering attention for his scene-stealing performances in “The Assassination of Jesse James by the Coward Robert Ford” and “Bright Star,” and last year appeared in Woody Allen’s “Café Society” and Warren Beatty’s “Rules Don’t Apply.”

The actor spoke with Salon about making “The Daughter,” his drinking habits, tattoos and telling the truth.

There is a line in “The Daughter” about how we all wish to be born somewhere else. You are from North Carolina and went and made this film in Australia. How did that happen?

What’s more interesting is how I got cast in “Bright Star.” I am from North Carolina, and I saw “The Piano” when I was 17. I wasn’t an artsy kid; I was into music. I remembered the two women who made it, Jan Chapman and Jane Campion; both had JC as their initials. It was one of those things that sticks in your memory.

The film resonated deeply with me. Michael Nyman’s score did, too. Because of his scores, I kind of don’t know how I did this, but I followed him. That film sent me to film school, which was not at all in the cards. Fourteen years later, when I got a call from Jane Campion, that was weirder, and then we made “Bright Star.” Now, Jan Chapman and I are friends, and that to me is extraordinary.

If you grew up in Buncombe County, [North Carolina] and listen to Led Zeppelin, the people who are making movies might as well be from Saturn. The reality is so far away from your experience. And then you realize there’s a place for you at the table if you fight hard enough. And I want to sit at the table of Jan Chapman and Jane Campion. How that preference came from western [North Carolina] who fucking knows?

In a six-month period, you have made the romantic comedies “Café Society” and “Rules Don’t Apply” by veteran filmmakers and this heavier, Ibsen-inspired drama by a first-time director. What observations do you have about the collaborative process of making movies?

It’s funny because, I think, as in everything, people want to try to create a pattern out of stimulus. There’s nothing drawn from one experience of making a movie to another. There are infinite variables; physical productions have no lessons that can be applied from one to another. The personalities are all new and it’s such an intense work environment. It’s like the first time every time, whether it’s [working with] Woody Allen or Warren Beatty, who isn’t as prolific as he used to be. But the demands of an actor are so specialized and unique and unpredictable every moment of every working day.

I just did this TV series, and people on the street were apologizing to me that they haven’t seen it yet — as if it was a child of mine. I showed up and did my best. And they say they like it or don’t like it, as if I alone made this thing. I have a specific role to play. The rest is a massive group of people. This idea of the “auteur” we learned in film school . . . Stan Brakhage is an auteur, but people who have a slanted vision or show things that people aren’t used to or haven’t seen before, that’s not them making the film by themselves. What is “The Cook, the Thief, His Wife, and Her Lover” without Michael Gambon? It’s not that films work in a vacuum; it’s that they work at all.

You are a character actor in a leading man’s body. Do you prefer working in ensemble films, doing TV series or starring in indie comedies like “Goodbye to All That” and “The Babymakers”? What do you see as your strength as an actor?

I am a great collaborator. It’s what I enjoy doing — scripts that give you a chance to really collaborate and flesh things out and try things. Not every film experience is a glorious creative experience. I made the choices I’ve made with what I know at the beginning of it and how collaborative it will be. I can’t predict trends, what’s big or small or a hit or not. You get information when you receive a project and I make my decisions on the script, the people and how collaborative an experience it will be.

Christian has anger towards and contempt for his father who is marrying a much younger woman. His friendship with Oliver [played by Ewan Leslie] gets tested, and his interactions with Oliver’s daughter Hedvig [who is portrayed by Odessa Young] border on inappropriate. How did you find the character’s mix of charm and insouciance?

As far as finding the character, what I’m looking for is a script with enough meat to chew. I was reading a [new] script last night, but I didn’t love it, and good ideas weren’t popping into my head. Sometimes great scripts don’t inspire you, but Simon’s script for “The Daughter” was really balanced in that everyone had their moment. There were a lot of characters, but no character was unnecessary and they each had plenty to do. That’s good stuff to play. The script has to be gasoline and I have to be a match, then we get the fire afterwards. Simon wrote a great fuse.

The idea I had about Christian was that in some way he would reject his father and run off to America to make it on his own. But when he came back, I had this idea of someone who had come out of drug rehab or was newly converted to a religion, or who was wrestling with things and projecting it onto others: We all have to tell the truth all the time and that is what will save you.

He was someone who is not taking in info but all about giving it out — a transmitter not a receiver. The info is only going one way. Something helped him [discover this]. So he’s convinced it will help everyone: The truth will wash us all clean. He doesn’t think through what it all means.

The characters in “The Daughter” are scared of the truth. Christian certainly is when it comes to his relationship with Grace, his girlfriend, [played by Ivy Mak]. What can you say about the issue of truth and trust which are at the heart of the film?

We all lie a little bit sometimes. We all tell the truth. I feel that this idea that the distance between what someone says they are and what they actually are could be a yardstick for sanity. The craziest people I’ve met heavily advertise one thing and behave very differently. Living with that kind of duplicity must be exhausting.

I’m married, so I don’t know much about it, but talking to my single friends about the Tinder world and dating multiple people at once and which cleverly worded message did you text to which guy or girl makes my head spin. Our ability to text things and flip-flop in our technology crept into the way we think.

I don’t know when to lie or when to tell the truth. It’s not a black and white thing for the character or the rest of us. I do like a little compassion and honesty. I’m more a fan of a kindly worded truth about why I didn’t show up somewhere than some lie about my grandmother.

Christian doesn’t “handle his liquor well,” he admits in the film and goes on a bender at one point. What can you say about your experiences with alcohol?

Yeah, I think early on in my life I hit things pretty hard. I’m not much of a drinker now, but in my teen years I was surrounded by older, crazy rednecks that I was desperate to impress — so that meant drinking more than everyone and doing crazy things. But before I went to college I stopped all that. I’m glad I did.

What about Christian’s comment about not wanting to grow up? Do you feel that you are still a big kid?

[Laughs]. That line was an ad lib I threw in and people attached meaning to it. It was something I used to say to my friends when I was young and we were drunk. I thought it was funny. I think people are funny when they are drunk and get poignant. I used to say that in this redneck valley we grew up, “Let’s never grow up!” when we were drunk in the back of a cemetery. Of course we should grow up — we need to get out of here.

Can you talk about Christian’s or your tattoos? What do they symbolize?

I have a bunch of tattoos, and I’m not big on them meaning much of anything. It was probably me being 16 and desperate to differentiate myself from the group I was in.

I just saw on Instagram that someone got a tattoo that read, “What do you got to give?” which was one of the lines I improvised in “All the Real Girls.” I responded to him, and he wrote back citing another line I said offhand in that same movie . . . authorship, symbols, words.

Christian talks with Oliver about when they were young and he chased a woman who got away. Was there ever a “one who got away”?

Of course, yeah, sure. But no one who keeps me up at night. My wife is very intelligent. I love her past and she loves my past. I’m not cyberstalking any old flames. I’ve got enough trouble!