Many women, many reasons: "Those who seek to dial back the progress this country has made, I will not stand for it" 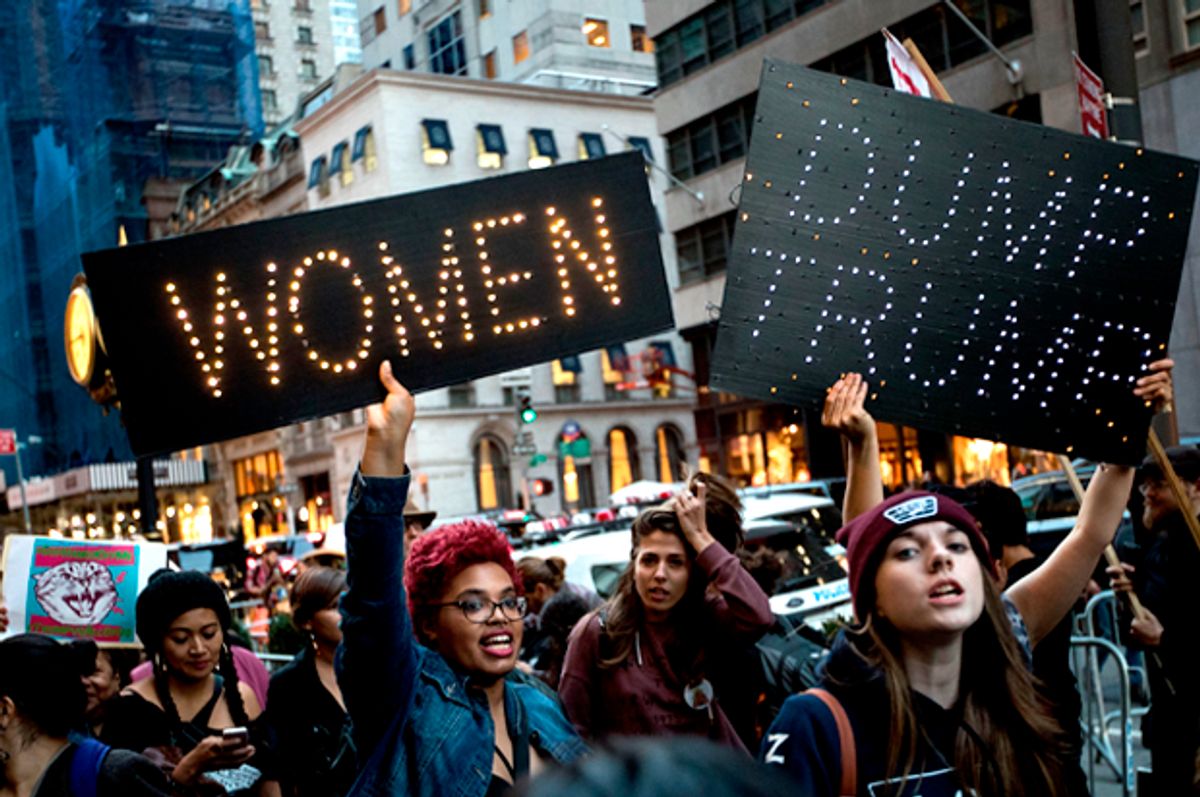 "We stand together in solidarity with our partners and children for the protection of our rights, our safety, our health, and our families — recognizing that our vibrant and diverse communities are the strength of our country," reads the mission statement of the Women's March on Washington. Like most movements, it has a platform.

On Saturday, the day after the inauguration of President Donald Trump, an estimated 200,000 women from all over the country will march in Washington and in 600 sister marches in other cities. They want to be seen — and heard. And they want you to know that they didn’t need permission.

Emily Paulsen, who lives in the D.C. area, decided to join the march the moment she heard about it, the day after the election. “I would like the march to show that the diversity of America can stand with each other and stand up against hate and bigotry,” she said. “We can stand together with and for people of different colors, backgrounds, income levels, gender identities and orientations, disabilities and health profiles.”

Paulsen will march with her husband and daughter, who is gender nonconforming, as well as friends and family.  “I will be wearing a pink hat knitted by a friend who cannot march, but wishes she could,” she said.

Genevieve Morgan will also be wearing her knitted hat when she heads to D.C. to march. As one of the organizers from the state of Maine, she said about 4,000 people are traveling to Washington from her state and four cities in the Pine Tree State will also host marches. Recent events, she said, “have engaged people who haven’t marched since Vietnam, both Republicans and Democrats.”

Participants from Maine received de-escalation training about how to avoid hecklers and other issues, thanks to private donations, Morgan said. “We will be here and won't go away” is a key point for those gathering, Morgan said, noting that, for her, Saturday will be especially about fostering equality. “While everyone has different primary concerns," at its heart, the march on Washington is "about inclusivity and protecting our democratic values."

“I want to make it clear to those who seek to dial back the progress this country has made that I will not stand for it,” Morgan said. “This administration and this Congress represent some of the most volatile and narrow-minded thinking I've seen in politics.”

This coming weekend Lisa Cook Gordon, of rural Michigan, will already be in Washington, since she'll be attending the inauguration. She had made arrangements months ago, when she had felt sure that Hillary Clinton would win. (“This will be my third inauguration weekend,” she said.) Cook Gordon won't be marching against the new president per se but she feels that partisanship around serious issues is tearing the country apart. “I’ll be marching for women, children and people living with disabilities,” she said, adding that she wishes to "advocate for access to health care.”

Debra Gordon, who lives in the Chicago suburbs, said her participation stems from “fury at the election” of a man who “won” by a handful of votes scattered across three states  She sees the march as “representing all the demographics [that Trump] dismisses — women, people of color, Muslims, LBGTQ, the disabled."

Added Gordon: “My biggest concern is the destruction of democracy, freedom of speech, sanity, our standing in the world, our intelligence, etc. . . . Every single thing I believe about this country and support about our government is now in question.”

Marching beyond the Beltway

Washington won't be the only place of action. Organizers have estimated that 600 cities across  the country and around the world will host marches on Saturday. “I had considered going to Washington, but that was a hard decision,” Martha Hall Foose, 49, said. On the other hand, joining a march near her home in Jackson, Mississippi, "was an easy decision.”

Natalie Ray will participate in Chicago. Like many others, she wants to be counted and heard — and to be of service. “I will be Uber driving participants around,” she said. “I will be there to make a noise, to support women — and not support the new administration.”

In Oakland, California, Julia Allenby is all in. “I did think about going to D.C. I had tickets, in fact,” she said. “Other responsibilities around the date got too crazy, and on the seesaw of life, that trip didn't weigh heavily enough." But she immediately pivoted to planning to attend a local march.

This will mark Allenby's first time of participating in a demonstration. “In the long run, I guess we'll have to wait and see what kind of impact can we have," she said. "Right now, this seems necessary — as necessary as voting."

And “it's important because Donald Trump has said and done so many things that are beyond the pale," Allenby continued. "Because the contrast between incoming and outgoing is like hell and heaven," she added, "I want to be part of the non-silent majority saying that this is not who we are.”

Foose will catch a train to Jackson from her home in Greenwood, Mississippi. “I decided to go so the governor of Mississippi, Phil Bryant, sees a sea of women and those who support the need for women's health care, early childhood education, protection from discrimination based on sexual orientation, access to mental health services and the arts,” she said. Noting that she has been disheartened by the incoming president's behavior, she said, “I know 13-year-olds with a far better ability to express and contain themselves.”

Women of color will be front and center

Tamika Mallory is one of three co-chairs (out of a total of four) for the Women's March on Washington who are women of color. It's important for black women to be part of the events, Mallory said. “We are hoping that black women will see the need, across sectors of experiences and lifestyles, to unite and begin to work together in new ways.”

Added Mallory: “We want them to harness the energy from this march and use it as an opportunity to work together and launch a renewed movement for justice and equity.”

That call has been heard. Like many women, Shelley Eversley, a black woman who is the descendant of immigrants, felt compelled to march. “I teach at City College of New York," she said, "And on the Thursday after the election I met with a class that represents the working class and the the diversity that is New York.” As those gathered talked, she just cried, she recalled. “I knew I had to be the one in the room to stand up.”

Mallory pointed out, “It is important for us to set the agenda not just be a line item,” adding, “We need to have a seat at the table and make our voices heard.”

Eversley collaborated with friends and rented a bus that will take 60 people to Washington. “We are going to be an interracial group, male and female, gay and straight,” she said.  More than 1,200 buses have applications for parking permits for the march, according to reports that found just 200 buses had applications for the period during the inauguration.

Sharon Latson will make the trek to Washington from Chicago with friends and her daughter who is traveling from Atlanta. There was no way that Latson was going to miss the event, she said.

“There are so many issues. Black women’s voices need to be heard because there are still significant conflicts between black and white women,” Latson said. “We are the last hired and don’t get the same kind of pay," she asserted. "We need to be able to address sexual harassment and ageism as they affect us."

When it comes to measuring the power of the marches beyond the single day of solidarity, the real test of success will be when people return home. Action must follow at the state and local level, participants said.

“I want people to go back home and do something," said Cook Gordon. "Start dialoguing with their policy makers.” While she's hopeful, she said, “If nothing happens, I will still know that I just didn’t sit back.”

In Debra Gordon's neighborhood on Chicago's North Shore, she said, “We are already seeing outpouring of support for existing organizations and the organization of new ones. Every day that passes and every tweet and news report on the horror of this man and his administration fuels more support for opposition and protecting our rights.”

For Eversley, the work has just begun. “Call your congressperson. Read the paper. Run for office,” she said. She doesn’t expect those in opposition to the march's agenda to simply stand down, but they will have a harder time implementing their plans if people go home and become involved, she aid.

Organizers in Maine have also started looking ahead. “We are building a database as a way to share information on a local level," Morgan said. "We are getting ready for the 2018 campaign cycle." She and other participants agree that the marches have inspired a lot of people to action.

Mississippi's Foose will stay vigilant and keep on doing work: “It’s time to huddle up, Buttercup,” she said.