Dogs have been bred as a companions, not as tools. TMZ reveals terrible truth behind making of a cute dog movie 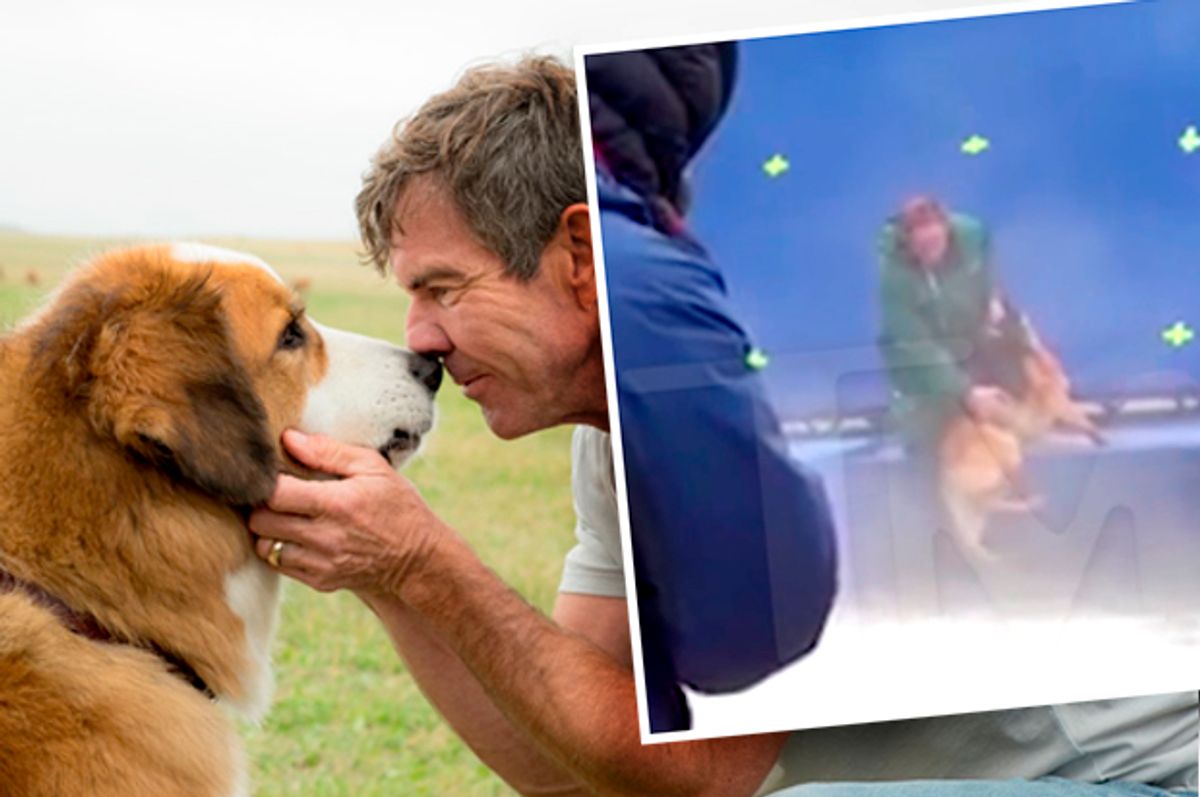 Like any dog owner—or any flesh-and-blood human person whose heart beats, however faintly — I watched the trailer for “A Dog’s Purpose” through a gauzy haze, my eyes misty with tears. Based on W. Bruce Cameron’s bestselling novel, itself hailed as a “three hanky boo-hooer” by Publisher’s Weekly, “A Dog’s Purpose” tells the story, or stories, of Bailey (voiced by Josh Gad), a dog who finds himself reincarnated in various bodies and bonded with various human companions. To respond to such perfectly calculated sentiment with anything other an automated drip of tears feels unnatural, even inhuman.

More recently, however, I watched leaked footage from the set of “A Dog’s Purpose” through a different kind of haze: an icy-hot rage, the piquancy of my indignation undercut by a cold cynicism. I was shocked, yet unsurprised at the revelation that a movie about fictional dogs dying would probably involve the harm of some real-life, flesh-and-fur dogs.

The footage in question, which was originally released by TMZ, depicts a dog trainer repeatedly attempting to submerge a German Shepherd into a pool of churning water meant to simulate a rushing river. The dog, named Hercules, is seemingly terrified, repeatedly refusing commands and prods to jump in the water. At one point, the trainer chucks Hercules into the pool, and the dog desperately scrambles. Meanwhile, voices offscreen holler, “Throw ’im in!”
Naturally, the video of alleged animal abuse has raised all manner of human hackles. Star Josh Gad responded on Twitter, pleading oblivious to any knowledge of wrongdoing, and PETA called for boycott of the movie. This warm, fuzzy story of a bunch of adorable dogs has bared its teeth.

This controversy around “A Dog’s Purpose” unveils not just a case of animal handling malpractice on the set of one film, but the brutality at the heart of the cuteness industry, and the barbarism that has come to define our relationship to our so-called best friends.

This may all sound a bit cynical. But in the face of distressing images like this, we could all stand to be bit more cynical.

The word cynic derives from the Greek kynikos, meaning “dog-like.” In Ancient Greece, Cynic philosophers rejected social and political convention, as well as the heady abstractions of philosophy itself, desiring nothing more than to live in accordance with nature. And cynicism’s founder, Diogenes, venerated dogs. For him, dogs lived freely: they eagerly gobbled down discarded food scraps, and were beholden only to instinct, sleeping and defecating wherever they may.

Diogenes viewed the animals as models of productively antisocial venality, exposing the pretense and hypocrisy of high society. Following their lead, he was known for sleeping outdoors (often depicted in a hollowed-out barrel, dog at his side), spitting in the face of his well-off hosts, urinating in public and, in one famous story, snarling at none other than Alexander the Great — which only endeared him to the ancient king. “I am Diogenes the dog!” the great Cynic and social pariah was recorded as exclaiming. “I fawn on those who give me anything, I yelp at those who refuse, and I set my teeth in rascals!”
Diogenes offers a model for human-canine relationships that stands as a stark affront to stuff like “A Dog’s Purpose,” and the whole climate of pet ownership, which tends to views dogs a little more than appendages to (or, worse, accessories for) human beings. This attitude can be summed up by Josh Gad's character, who coos in dog-voice in the above-mentioned trailer, “If I can get you licking and loving, I have my purpose.”

Dogs exist instrumentally. They are for us. They give us — so the story goes — unconditional love, woofing and wagging when we come home from a long day’s work, walloping us with warmth and loyalty. We devour their cuteness, commissioning designer crossbreeds, Frankensteined together for our Instagramming, all the while compounding diseases and reproducing genetic problems. Dogs become more adorable, more desirable and their bloodlines putrefy. And I mean, just think about the idea of a movie made for humans from the point of view of a dog! It’s undoubtedly weird, as if their unique perspectives exist only to the extent that they can be absorbed into our own.

Or think of the people who costume their dogs in human clothes, for reasons other than warmth. I once decked out my dog with a RATT bandana, as if it would be at all persuasive that my dog somehow cultivated a love of ’80s glam metal. This kind of stuff only reflects our own lamentably human narcissism, at our own peril. A dog is not its own thing, but just a mere extension of us. In a way, it only makes sense that a culture and industry that breeds dogs for our amusement sees them tormented in the pursuit of that amusement.

So while I am susceptible to the finely tuned schmaltz of stuff like “A Dog’s Purpose,” I remain nonetheless disgusted: both by my susceptibility and by the underlying assumptions of said schmaltz, by this very idea that a dog has some singular “purpose.” When I adopted my dog, a beautiful and somewhat anxious beagle-hound mix, almost a year ago, I didn’t really know what to expect. I knew that I liked petting dogs, and rubbing their bellies, and was drawn in, in part, by that well-worn idea of a faithful hound greeting me at my door with my pipe and slippers.

Instead, the experience of adopting and training a rescue dog — who spent time in prison, no less! — has proved immensely challenging, incalculably expensive, and, sure, sometimes just annoying. If you’ve ever had to bail on social plans at the last minute because your dog won’t settle down and stop gnawing the door moulding, or come home to find your favorite book in chewed-up tatters, you probably know what I’m talking about.

At the same time it has, more than anything, been intensely rewarding and nourishing. For both of us.

In her 2003 tract “The Companion Species Manifesto,” scholar Donna Haraway writes than humans and canines exist in “co-constitute relationships,” a merging of nature and culture. In the dog adoption biz, you sometimes come across the phrase “bonded pair,” referring to a set of sibling animals who can’t bear to be apart, and who are meant to be taken in together. But I think this idea of bonding applies to humans and their animal companions (or animals and their human companions).

Because she cannot be left alone for more than few minutes without harming my personal property, annoying the neighbors with her strained barking, and worst of all, potentially mutilating herself, my Lilly goes everywhere with me. When she cannot, I leave her in the trust of a pet-sitter, or a “doggy daycare,” fully attuned to how noxiously bourgeois “doggy daycare” may sound.

I spend a good deal of time working with Lilly on what trainers call her “separation anxiety.” The irony is that in trying to train Lilly to be independent, we grow even closer, our co-constituted bonds only further entangling. I am teaching her to be comfortable alone, safe in the knowledge that I will not abandon her like her previous owners had. She is teaching me to be patient and unselfish.

Because Lilly isn’t about that drooly, tail-wagging, woof-woof-good-to-see-you type affection for which dogs are so often celebrated. She is cool and ambivalent, happy to curl up like a furry croissant or gleefully lick her own canine vagina all afternoon — a model of Diogenes’ notion of dogs as venal and exuberantly gross. Which is just as well. When she nuzzles up to me, or licks my face, or jumps up on me, I know that I have truly earned something, that I am not merely cashing in chips for affection that is somehow owed to me. She is unruffled by others, human and dog alike, and brisk with her affections. Yet she is also a keen explorer, easily relaxing into new situations. Once, on a fairly strenuous hike up a craggy escarpment in rural Ontario, I was worried whether she’d be able to make it, only to find her eagerly bouncing up rock formations, dragging her sweaty, winded master behind her.

Beyond the basic satisfaction of hanging out, and scratching her improbably soft ears, she has stirred in me a love that possesses no real objective or purpose. She and I are brought together, flesh and blood and fur, a bonded, co-constituting pair. Perhaps as a culture we should think more of how we can live in harmony with other species, and especially our beloved animal companions. Surely we can do better than distressing them and subjecting them to torture so they can in turn appear to perform heroic, inspiring feats of derring-do in some silly movie. We need to think less about what dogs do for us, and more about what we can do for them. Or even better: what we can do for one another.