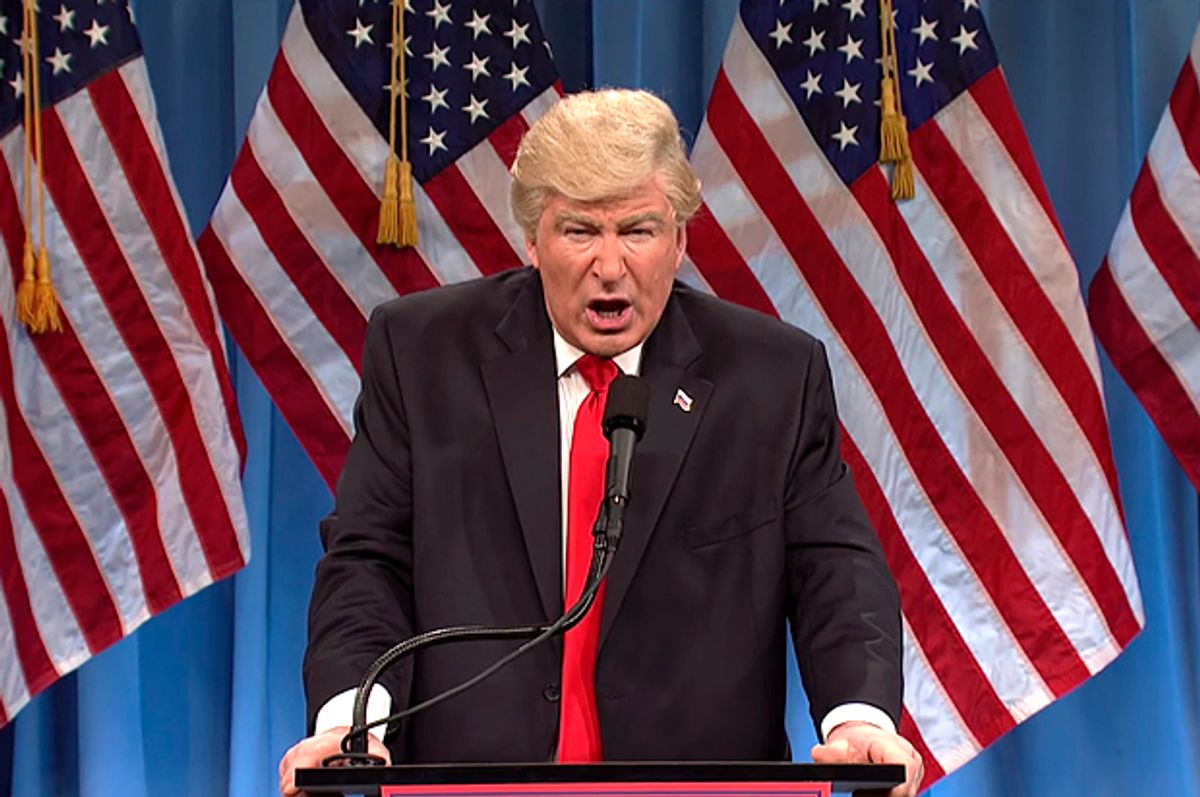 When you inaugurate a new president in this country, you inaugurate a new era of impersonations of that president. At least that has been true in our in our nation since the Kennedy era, when comedians first started the habit of emulating and embellishing the personality traits of presidents to great comedic effect. After the Watergate scandal, comedian David Frye mocked Richard Nixon’s paranoia and insecurity. And who could forget Chevy Chase’s bumbling, clumsy Gerald Ford?

And that of course is why impersonating President Trump is such a tricky art. Trump is already impersonating a president — play-acting at it and offering the public the most frightening case of fraudulent posturing we have seen in presidential history.

Again and again in his public appearances Trump has already seemed like an impersonation. He’s appeared bewildered as he meanders off topic in the middle of sentences. His speech patterns are laughable and incoherent. His hand gestures, staging and props add to the sense that he is just pretending. His childish insults and adolescent defensiveness already sound ridiculous. It’s not just that he doesn’t seem serious; it’s also that he seems so openly to be performing.

It’s hard to mock a mockery.

But there is one person whose impersonations of Trump are not only spot on, but also likely to impact public perceptions of our new president. Alec Baldwin’s impersonations of Trump for "Saturday Night Live" have been one of the most important comedic interventions this election cycle. He has not only revealed that the emperor has no clothes, he has redefined the art of the impersonation and taken it to new comedic heights.

The comedy of presidential impersonations typically depends on a few key features: the audacity of mimicking one of the most powerful people on the planet, the ability to emulate and exaggerate key features of a “unique” personality, and the ability to poke through the public veneer of a world leader and reveal a private side.

It’s generally all in the name of good fun — an example of mostly goofy humor that serves to deflate the aura of a public figure for a moment. The art of the impersonation tends to lie in slightly exaggerating the person’s habits of speech and gestures and making a powerful person seem a bit more average.

While impersonations are often a form of flattery — calling attention in the end to the power of the individual rather than really undercutting that power in any significant way — some impersonations can and do serve to reframe how the public thinks about the person being parodied.

There have been plenty of bland impersonations of Trump, from Jimmy Fallon’s innocuous mirroring of Trump to the work of John Di Domenico, who has made a career of imitating the Donald.

That is why Baldwin’s impersonations are such a refreshing and powerful alternative to the fluff offered by comedians like Fallon. Baldwin’s impersonations reinforce the bombastic and performative qualities of Trump’s persona. He takes those characteristics and exaggerates them only slightly, thereby pulling back the curtain to reveal Trump for the fake that he is.

Recall, for example, the post-election sketch that aired on Nov. 19 that portrayed Trump as entirely confused about what it meant that he had actually won. Baldwin was accompanied by Kate McKinnon, who appeared as a fatigued and overwhelmed Kellyanne Conway.

Baldwin’s Trump begins to greet high-ranking guests, but then it hits him: This is no longer a show and his words are no longer just empty campaign slogans. People may actually expect him to come through on the things he has promised. Rather than imagine that he might consult with actual experts, his response is to ask Siri for help: “Siri, how do we kill ISIS?”

The line is brilliant satirical comedy. While this is a totally fabricated moment, the public can actually believe that Trump might do that. This is a man who goes on Twitter rants in the early hours of the morning, refuses to answer substantive policy questions and surrounds himself with sycophants and extremists.

In another post-election sketch, Trump can’t stop retweeting during a security briefing. The retweets highlighted in the sketch were actual events, but the brilliance to the sketch was the way that viewers had to come to grips with the potential reality of when and where those retweets happened.

We know that the idea of the president-elect retweeting a high school kid is absurd, but having that action take place in the context of a security briefing was comedic genius. We had already learned that Trump was skipping these meetings and denigrating their value to him, but when the public had to grasp the reality that Trump considers a retweet of a kid more urgent than the acquisition of knowledge about global affairs, it drove home how woefully unprepared he is for the job of president.

The sketch also highlighted one of the most vexing realities to Trump’s Twitter use: It’s almost impossible to tell if his tweets are a diabolical plan to distract the public or a sign that he is completely incompetent. Kate McKinnon as Kellyanne Conway lays out the diabolical angle plainly: “There is a reason the Donald tweets it so much. He does it to distract the media from his business conflicts and all the very scary people in his cabinet.” But then Baldwin’s Trump offers the incompetent option: “Actually that’s not why I do it; I do it because my brain is bad.” He then confuses a plate of mashed potatoes with a bad picture of him.

The Baldwin "SNL" sketches also serve to help the public track the pattern of Trump’s behavior. Any time Trump is criticized, he responds by insulting and bullying his critic. And any time he is asked to come clean on his own record by providing copies of his tax returns or explaining his boasts about grabbing women, for example, he deflects to talking about “the blacks” or Hillary Clinton’s emails or some other dog-whistle topic. These habits were especially easy to see in the sketches where Baldwin impersonated Trump at the debates.

Baldwin isn’t simply acting like Trump, doing his voice and hand gestures; he is adding parody, irony and sarcasm to his impersonations in ways that help the public sort through the Trump smoke screen.

Similar to the way that Tina Fey impersonated Sarah Palin, much of the time Baldwin’s impersonation is actually an exact copy of what Trump has already done. The power of the impersonation is that when we see this absurd behavior mimicked by another, its obvious farce and extreme stupidity are easier to notice. Fey’s impersonations of Palin were so effective at revealing the emptiness of Palin’s rhetoric that they had a measurable impact on public opinion and directly led to her ticket losing votes.

Besides having heightened the presidential impersonation to a new art form, Baldwin has managed to repeatedly get under the thin skin of our newly sworn-in president. As The Daily Beast reports, “Trump has tweeted against SNL and Baldwin after nearly every single episode in which the actor has appeared, but as the inauguration approaches, it has become increasingly more unnerving and desperate.”

While the episode that mocked Trump’s tweets was still on air, Trump took to twitter to attack Baldwin.

Trump isn’t just proving the point of the sketch, he is actually adding to the satirical effect of the impersonation. Rather than act like a grownup — or a president, for that matter — Trump performs the role of a petulant child. This makes the actor performing the role of an adult acting like a petulant child look like the mature one.

Then, after the hilarious sketch where Baldwin impersonated Trump at his press conference, Trump huffed out this response:

The deep irony of the tweet was that it reinforced Trump’s complete inability to handle a free press and his confused blurring of news with a comedy show. For him it is all the same.

But the real reason why Trump's Twitter replies to Baldwin’s sketches are a sign of the way that his impersonations are having real public impact is because they then give the public a chance to engage with Trump and call out his foolishness. Each time Trump goes to Twitter to have a hissy fit, the public responds. Those comments show an engaged and critical citizenry who has been empowered by Baldwin’s sketches to call out the absurdity of Trump’s behavior.

For instance, after the sketch that showed Trump panicking as he realized he had work to do, Trump tweeted:

Baldwin then replied to Trump:

Even better, though, were the replies of average citizens to this exchange, like this one example:

Because Trump has taken to Twitter to respond to Baldwin’s act, he has opened up a space for public critique of his fake presidency. And these sorts of interventions are one of the key ways that citizens can struggle to not allow Trump and his team to control the public narrative.

Baldwin has also added punch to his persona by breaking character and allowing viewers to contrast his impersonation with Baldwin’s political critique of Trump. In the sketch that aired right before the election, Baldwin broke character to apologize to McKinnon, who was playing Hilary Clinton, for yelling at her all the time: “Don’t you guys feel gross about this?” They then took to the streets of New York to hug as many bystanders as they could.

On Thursday night Baldwin joined Michael Moore, Al Sharpton, Mark Ruffalo, Robert De Niro and other celebrities to lead a pre-inauguration protest in downtown Manhattan. Baldwin brought out his impersonation to humor the crowd, but he also showed that his criticism of Trump is dead serious: “Donald Trump and Steve Bannon and Mike Pence and all these people that are part of the Trump administration, they think that you are going to lay down. Are you going to lay down?”

Starting now, we are going to need all the political comedy we can get, since satire plays a major civic function in times of crisis. And luckily Baldwin is not operating alone. Michael Moore, Stephen Colbert, Samantha Bee, Lee Camp and Bill Maher have all shown us that they are ready and willing to help mobilize political comedy to take down Trump, but Baldwin via "SNL" is offering a very important part of the satirical resistance.

Thus far "Saturday Night Live" has aired nine sketches that have featured Baldwin as Trump. Each one of them has played an important role in exposing Trump’s flaws. Let’s see what tonight will bring.