Parts of the film almost felt like inside jokes to longtime Angelenos. Will the rest of the nation care? 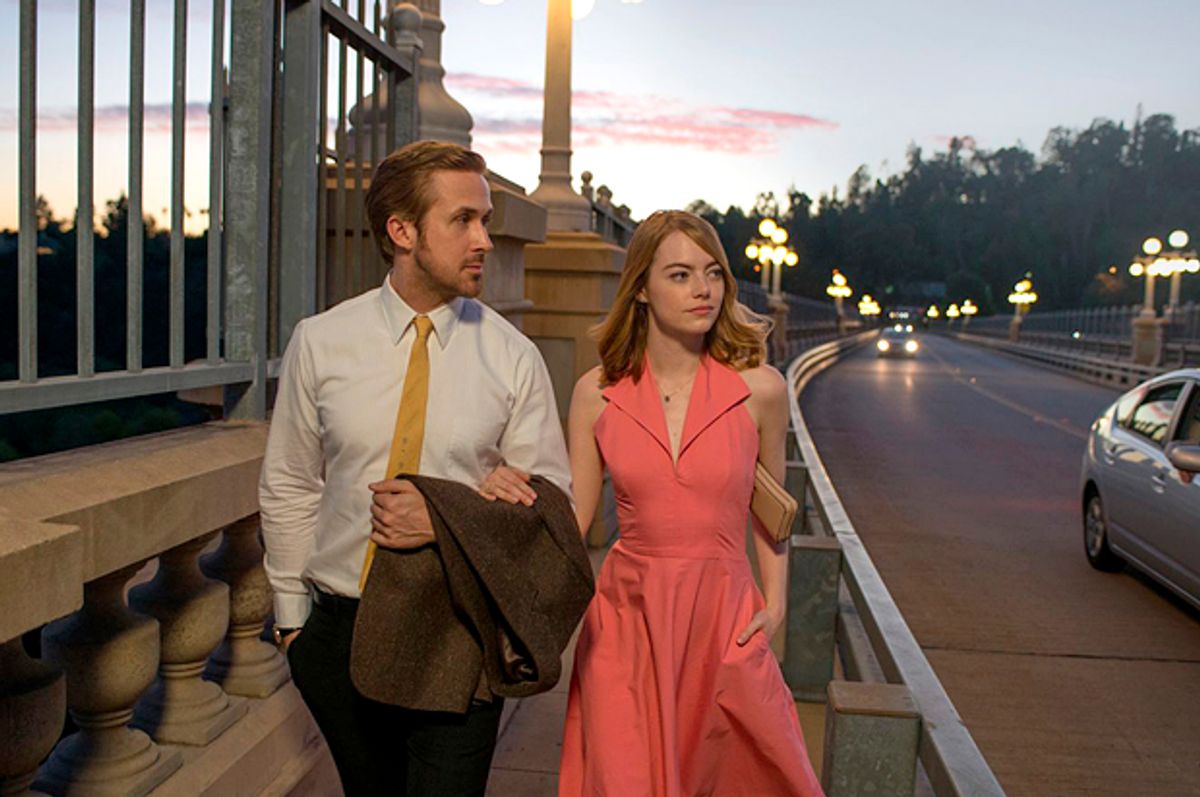 Ever been stuck in freeway traffic in L.A.? Well, anyone who’s ever visited the place or lived there for as long as a week surely has. But for a real, long-term Angeleno, the opening scene of “La La Land” — a massive Busby Berkeleyish dance number that unspools while cars sit stone-still on the 110 — is not just a clever conceit. It’s something like wish fulfillment: To think that one could do anything while stuck in traffic in Los Angeles provides the kind of jolt a man who has spent decades wandering in the desert would feel on spotting a waterfall.

And before long, as the film goes on, you’ve seen the El Rey, the Colorado Street Bridge, a very familiar kind of Hollywood d-bag pool party, Angels Flight, audition rooms, the Smokehouse, and the Griffith Park Observatory — which has not looked so good since “Rebel Without a Cause.” You see, in other words, shards of the city that are not so much part of Hollywood lore as of actual Los Angeles life: places you need to really live here to know about or to understand. For us locals, they’re all part of a city that we experience in a more complex way than the usual sunshine-and-noir clichés that Hollywood and even many novelists typically throw at us.

Part of what’s striking is that here — to steal the name of an important documentary only screened sub rosa for years because of its unlicensed footage — is that Los Angeles plays itself. Instead of standing in for New York City or a small Midwestern city or Anywhere, USA, this is a real place with freeway sig alerts and Mulholland Drive and the Santa Monica Pier and Fern Dell and long, lonely streets where the valet guy stashed your car. It’s also a place where the movie studios exist — Warner Brothers, in this case — but where they are not simply glamor factories but places where a disappointed but hopeful red-haired girl could toil behind a cash register and espresso machine, just as she would if she were still at the Sbarro in a Scottsdale mall.

These references that only locals will get, and various little inside jokes, may not hurt the film’s Academy Awards chances — most Academy voters live in the Southland, after all. But it could ultimately put a ceiling on the film’s popular success in the vast stretches of the nation that are not Los Angeles. Ironically, the independent film tradition that “La La Land” largely works within originally aimed to capture America in all its sea-to-shining-sea splendor: Sundance was set in Utah for a reason, and its programmers looked for films from all regions, because the idea was to get away from movies shot and set in New York and L.A. (That didn’t really work out.)

The film, though, is not just incidentally set in Los Angeles. And it’s more than just a love letter to L.A. or a series of in-jokes about life in a smoggy, sprawling, cynical, endlessly surprising and eternally renewing place: It’s a film whose very spirit grows out of post-riots, post-Beck Los Angeles. Its jaded romanticism, its bleary melancholy awaiting a moment of lyricism, is the signature mental state of educated, demoralized people living in an incredibly expensive place that rarely offers the big paychecks of New York or the professional solidity of more conventional cities — a city that could burn to cinders with the next Santa Ana or drift out to sea the next time the San Andreas rips.

The film’s complex sensibility — and sense of sudden epiphany in a fallen world — may also come from Catholicism or at least from Catholic writers like James Joyce; director Damien Chazelle comes from French Catholics on both sides. Between being founded by the Spanish, transformed by the Irish (Mulholland, Doheny, the Brown family), and populated increasingly by Latin Americans, Los Angeles is one of the most profoundly Catholic cities in the States.

None of this makes “La La Land” — a film assailed as racially patronizing, for an unhealthy obsession with jazz, and for leads not up to the singing and dancing that a musical must (we’re told) provide — a better movie.

But those of us who live here — who put up with the bleak side of life in a dried-up, overpriced megalopolis that Frank Zappa once called high school with money — get tired of seeing Los Angels as just a Sodom that must be destroyed or a promised land full of nubile blondes and endless opportunity.

For many of us who really drive on the 101 and shop at Trader Joe’s and hike in Griffith Park — who know the place’s history, puzzle at its paradoxes, and exalt at its contradictions — this seemed like the first film in a long time that really unfolded in the place where we live.