Reassessing "Daria": The legacy of MTV’s deadpan "misery chick" is not one of cynicism, but hope

15 years after the show's end, Daria is known as a misanthrope. But there's a beating heart behind that stare 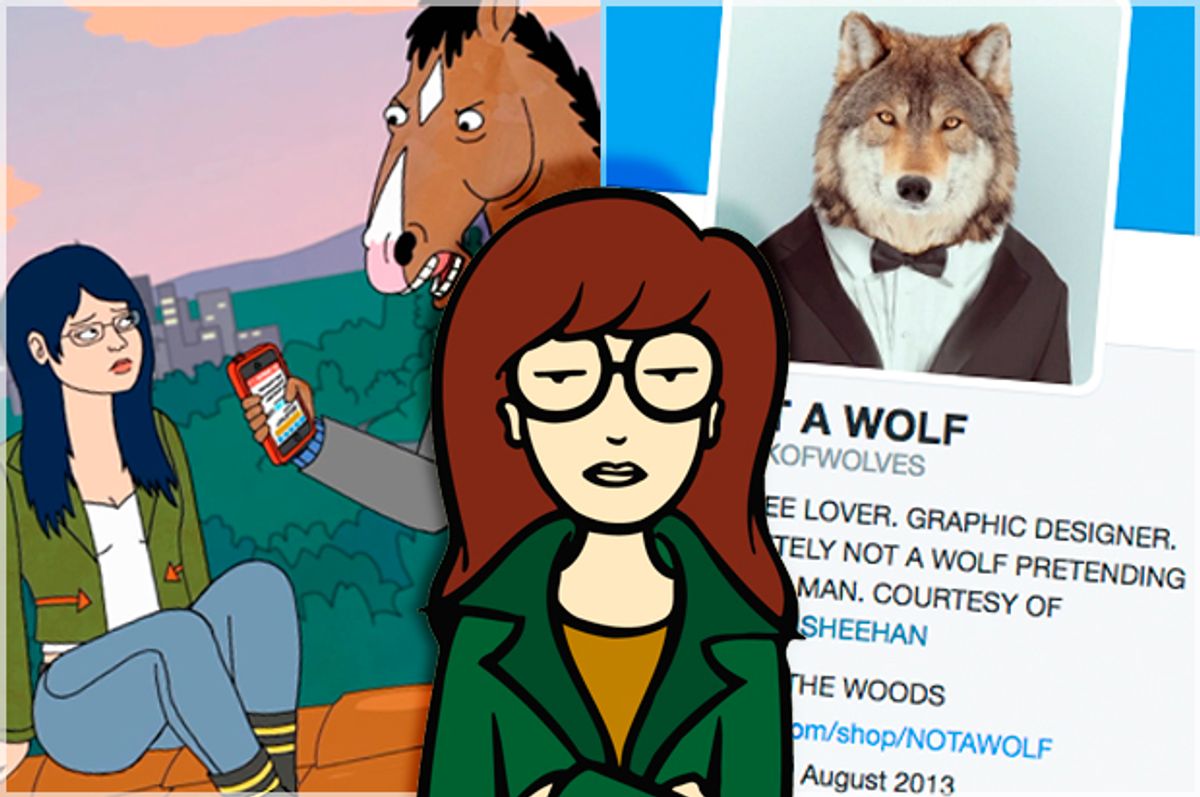 In one of the most famous scenes of MTV’s animated series “Daria,” the eponymous heroine and her sister Quinn share school pictures with their parents. After gushing over Quinn’s elaborate and expressive photos, their mother chides Daria over her blank, expressionless gaze.

“Daria, just once, why can’t you smile when somebody takes your picture?” her mother, Helen Morgendorffer, implores.

“I don’t like to smile unless I have a reason,” Daria replies dryly.

“Daria, people judge you by your expression!” Helen gently urges.

“Yes,” Daria replies, “and I believe there is something intrinsically wrong with that system. I have dedicated myself to changing it.”

Today, 15 years after the final episode aired on MTV, “Daria” is often remembered as a misanthrope, rather than an activist, a misfit who appealed to teens who also felt out of step with the popular kids. But while Daria’s iconic green jacket, round glasses, black skirt, combat boots and deadpan expression may make a fantastic throwback ’90s Halloween costume — the show debuted in 1997 as a spin-off of Mike Judge’s “Beavis and Butt-Head,” her cynicism worked not because she was a quintessentially angsty teen, but because of how principled her character was. Daria’s clever quips were less about being jaded than about outright rebellion, a refusal to give in to a shallow, appearance-obsessed culture.

In Mark Greif’s 2016 collection of essays, “Against Everything,” he argues that skepticism about the status quo is actually the opposite of pessimism — it means that the critic is actively engaged in looking for new possibilities and potential, rather than merely accepting the world the way it is. “To wish to be against everything,” he observes, “is to want the world to be bigger than all of it, disposed to dissolve rules and compromises in a gallon or a drop, while an ocean of possibility rolls around us.”

While some early critics of “Daria” complained that her view of high school dynamics was too depressing to be enjoyable, for fans, the pleasures of watching Daria came not from simply commiserating about a shallow world, but seeing the possibility of a world outside of Lawndale High, and the bland suburban rat race to which her parents (former hippies) ultimately resigned themselves.

The sense of hope is also emphasized in the way that “Daria” allows the show’s other characters to learn, change and grow, while still retaining their core personalities. By the time the series ended 15 years ago today, Daria’s popularity-obsessed sister Quinn doesn’t change and become a “brain,” but she does learn to establish an identity outside of The Fashion Club. Slowly, over the course of the entire series, we see her parents Helen and Jake learn to accept Daria, while still encouraging her to grow. And we see Daria’s best friend Jane make similar strides to separate from her counter-culture family and, supported by Daria, strike out on her own by applying to art school.

Often, as in the case of “Seinfeld,” “Curb Your Enthusiasm” and “Arrested Development,” dry on-screen humor is presented as cruel: Biting sarcasm is used to passive-aggressively attack, and deliberate irony is employed as a means to avoid compassion and intimacy. Yet “Daria,” along with more contemporary programs featuring deadpan characters like “Parks and Recreation” (with beloved cynics April Ludgate and Ron Swanson) and “BoJack Horseman” (from perpetually dissatisfied BoJack and smart, cynical Diane, who is often directly compared to Daria), the overriding message is one of longing for a world where real connection overcomes phoniness.

One of the reasons that deadpan actors and characters become fan favorites has to do with this emphasis on real over pretend relationships — when Margot (Gwyneth Paltrow) and Richie (Luke Wilson) smile at each other in Wes Anderson’s “The Royal Tenenbaums,” you know they share a deep, rather than superficial, relationship. It’s why the connection between Bob and Charlotte (played by Bill Murray and Scarlett Johansson) in Sofia Coppola’s film “Lost in Translation” is so appealing — their moments of happiness are built on slowly established intimacy and trust.

This isn’t to say that one of the appeals of TV cynicism isn’t the hilariously barbed comments, too. Daria’s wit throughout the series is often biting, whether making fun of the good-natured but dim-witted cheerleader Brittany or rolling her eyes at the overly sensitive linguistic gymnastics of her English teacher, Mr. O’Neil. And nothing says snark like the extreme and ridiculous scenarios found on Daria and Jane’s favorite tabloid-inspired show, “Sick, Sad World.” But the power of “Daria,” and the reason it generated such a loyal following, was that it pointed to the possibility of a world where appearance is more important than substance. Daria’s refusal to bend herself into what society wanted was a kind of protest, one that was never shown to preclude her ability to connect with real friends like Jane, or even, in the final season, establish a meaningful relationship with her first boyfriend, the equally smart and sometimes emotionally confused Tom.

Daria’s insistence on not giving in to to the cult of appearances seems particularly relevant today, in a world where “building your brand” is more important than ever. At a time when people eagerly put themselves into various boxes, the insistence on individuality over groupthink is becoming more and more an act of resistance. The social pressure to smile on cue doesn’t end when we leave school or the office, but continues as we curate our online personas, from the pictures we put on Facebook and Instagram, to the things we choose to share on Twitter.

One important way that the Internet world uses Daria’s brand of cynicism to push back against an increasingly vapid world is the advent of what I like to call Existential Twitter, where accounts like @KimKierkardashian push back on the shallowness of celebrity culture by fusing quotes from reality TV star Kim Kardashian with quotes from philosopher Soren Kierkegaard, and accounts like @WernerTwertzog, which plays on the absurdity of modern life using the cadence and tone of existential filmmaker Werner Herzog. A recent favorite is the brilliant and funny @SickOfWolves account, which is supposed to be the musings of a wolf pretending to be a man in order to fit into society at large. These subtle, deadpan critiques on current culture are hilarious, smart and also deeply political, offering a mirror to the kind of societal norms we’ve grown accustomed to.

On the series finale’s 15th anniversary, it’s important to see Daria’s legacy as not simply a feminist one (one that laid the groundwork for many of the shows today which are deeply invested in pushing back against a culture where women exist simply to be pretty), but about a broader kind of resistance to homogenized happiness and acceptance of the status quo. While Daria’s iconic look is staring directly into the camera, unsmiling, the heart of the series has always been about the power of not conforming. The most essential moment of the show’s intro scene is not the opening, where she is seen looking unmoved in a movie theater, in school, at a hockey game and at a wedding. Instead, it’s in that final moment when she is by herself and able to look directly into the camera, and she smiles.