So much promise, so much disappointment: A Muslim bids farewell to president Obama 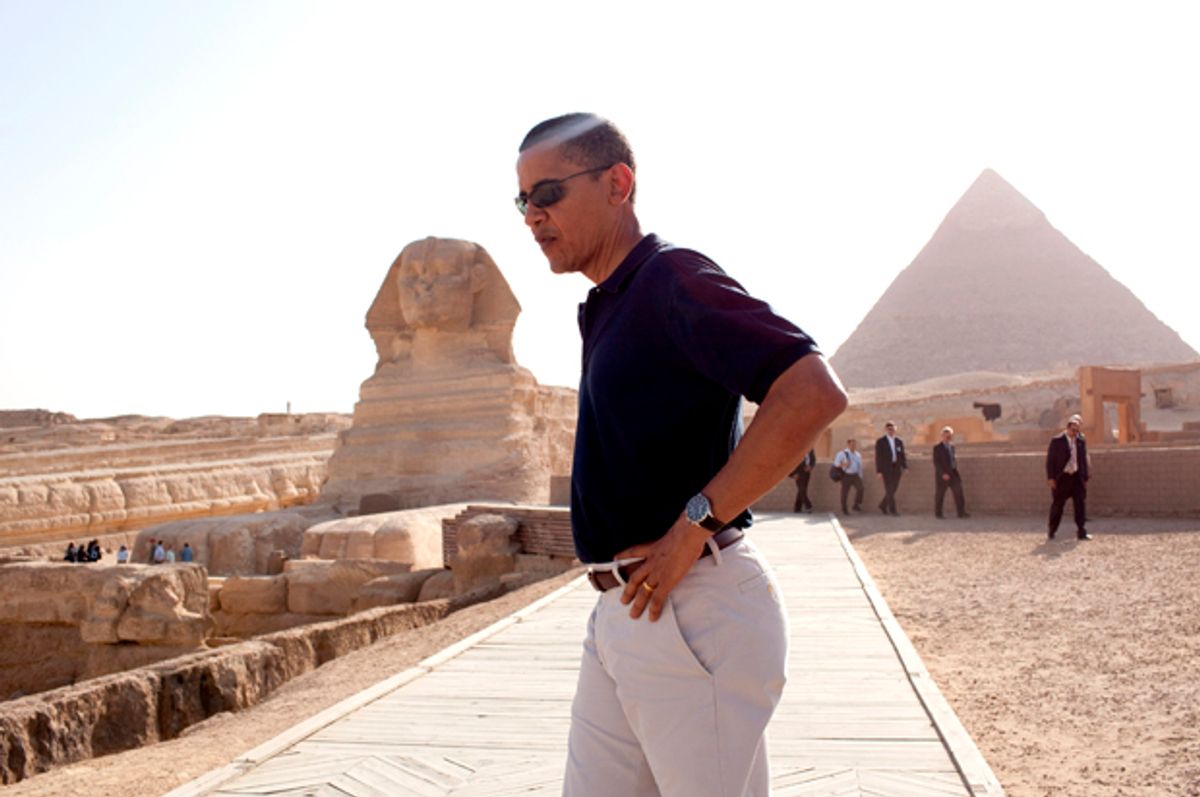 Before Barack Hussein Obama became president of the United States, he considered himself a blank canvas upon which others could project their aspirations and hopes for the world. The African-American son of a father born in Kenya and a mother born in Kansas seemed to understand the transformative potential of being someone who resonated with disparate groups and individuals. He based his candidacy on this ability to unite the divided.

Muslims at home and abroad saw a man potentially sympathetic to them. Though they were heartened by the interdependent world that Obama eloquently spoke of, his Arabic middle name, his history of Pakistani friends and the several years he had spent as a child in Indonesia were most intriguing. In the post-9/11 world that had dehumanized Muslims (with the invasions of Iraq and Afghanistan, with torture, drones, domestic surveillance, deportations and detentions) and that had consistently cast their religion as a forbidding monolith, the constitutional law professor's cosmopolitan background and appreciation for nuance seemed a boon.

Many Muslims saw a part of themselves in President Obama, something they never saw in his predecessor, George W. Bush, and felt an ineffable hope that he, too, saw himself in them. In 2008, 89 percent of Muslim voters chose him on the ballot. Four years later in 2012, 85 percent did so.

Obama embraced all this. He stood on the west front of the Capitol on Jan. 20, 2009, and noted that great things are achieved “when imagination is joined to common purpose, and necessity to courage.” Months later, he gave his famous address at Cairo University about the need for a new beginning between the United States and Muslims based on a common humanity, truth, mutual interest and mutual respect. The speech finished with the invocation of a central tenet that undergirds all faiths — that we do unto others as we would have them do unto us.

As we cross Jan. 20 eight years later, the Muslim appraisal of Obama’s presidency yields a conclusion similar to other parts of his legacy: The lofty rhetoric failed to shrink the chasm between ideals and reality by the miles many had hoped or expected, but the inches gained were still worthy of celebration. Foreign Muslim “others” continued to suffer in distant lands while Islamophobia thrived here at home. Inescapably, that becomes one of the lenses through which to view the complicated legacy of the nation’s 44th president.

It's difficult to discuss Obama’s domestic policies regarding Islam without mentioning the orange cloud that has now descended over the White House. By now, the rap sheet of Donald Trump, a petulant vulgarian whose intellectual breadth and depth seem appropriate for Twitter’s 140 characters, is well known. His invective and virulent strain of Islamophobia victimized president Obama, who is still believed to be a closet Muslim by many Trump supporters. The onetime reality-TV star even encouraged this canard at his rallies.

These claims dogged Obama’s tenure from its beginning, hatched primarily by opponents in order to denigrate and cast suspicion on his true intentions for the country. The concerns regarding Obama’s “Muslim-ness” may have contributed to his reluctance to visit a mosque earlier in his presidency, despite numerous invitations and previous appearances in other houses of worship. Given the noxious Islamophobia rampant throughout the country, this appeared to be a calculated decision made to preserve his re-election prospects and prevent political backlash from an increasingly strident Republican opposition.

In addition, concerns about the surveillance of Muslims did not disappear when George W. Bush returned to Texas. A counter-radicalization program called Countering Violent Extremism, begun in 2011 under the Obama administration, focused surveillance efforts primarily on Muslim Americans. This further perpetuated the belief that Muslim identity and terrorism are synonymous. According to Khaled Beydoun, a researcher on domestic national security, “the counter-terrorism reforms and expansions Obama made are really equipping the Donald Trump administration with the infrastructure and strategy to bring forth more nefarious counter-radicalization policing.”

Internationally, Obama became the first president to finish two complete terms with the nation at war the whole time. He authorized 10 times more drone strikes than Bush had, all of them effectively targeting Muslims.

After promising in 2009 that “America’s relationship with the Muslim community, the Muslim world, cannot, and will not, just be based on opposition to terrorism,” Obama did just the opposite. In 2016 alone, the United States dropped 26,171 bombs. While most of those fell in Syria and Iraq, they also came down on the people of Afghanistan, Libya, Yemen, Somalia and Pakistan. These are all Muslim-majority countries. In the process of all this carnage, as Code Pink co-founder Medea Benjamin wrote, “Untold numbers of foreign lives have been snuffed out.”

When it came to Aleppo and areas where Muslims are languishing under autocratic rule or perishing in violence, it seemed, as Leon Wieseltier wrote, “that during the past eight years, the values of rescue, assistance, protection, humanitarianism and democracy have been demoted in our foreign policy or in many instances banished altogether.”

But despite the intrinsic hardships of governing, an obstructionist Congress and the influence of the military-intelligence bureaucracy known as the "deep state," there were glimpses all along of the Obama whom America’s Muslims had embraced. His fingerprints seemed apparent on the dismantlement of the original Muslim registry created under president Bush in 2002, the National Security Entry-Exit Registration System, and on the recent U.S. abstention during the United Nations vote to end illegal Israeli settlements on the occupied West Bank.

There was palpable conviction in Obama's voice when he sought to avoid giving ISIS legitimacy by refusing to call it “Islamic.” This sincerity remained until the very end.

In his final address to the nation, Obama explained that he rejected “discrimination against Muslim Americans, who are just as patriotic as we are.” It was a decency and a rectitude whose impact cannot be overstated. In Obama’s words, Muslims once again found refuge. After months of being besieged by Donald Trump’s Islamophobic bluster and far too much talk of an impending conflict of civilization, it was simply good to feel that we once again belonged in the American conversation. Unlike in 2008, there were no other expectations.