What Ivanka can do in the shadows: Donald Trump's daughter says she won't be his first lady — so what will she be? 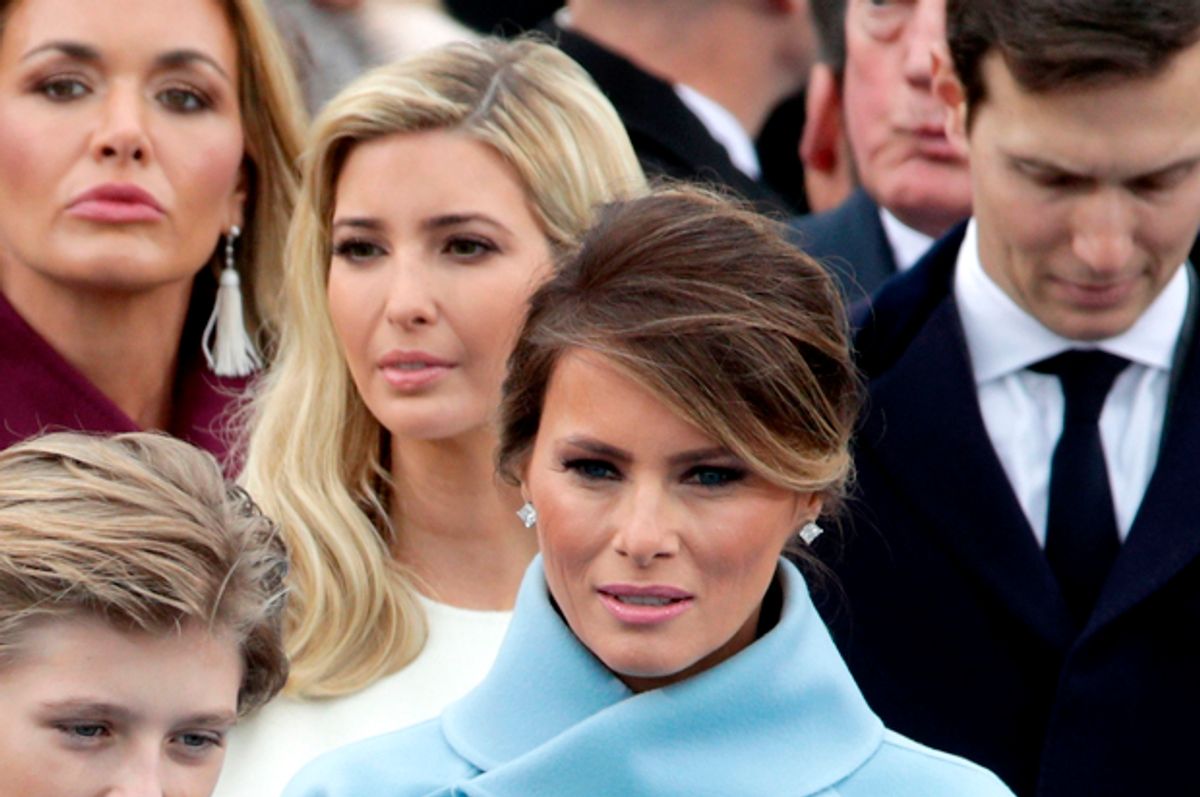 President Donald Trump enters the White House with former Republican National Convention chair Reince Priebus as his chief of staff — and harbinger of hope for stability in an administration many fear will be as maverick and ad hoc as Trump’s campaign was —  and Breitbart alum Steve Bannon as his chief strategist. But it’s Trump’s daughter Ivanka and her husband, newly minted senior adviser to the president Jared Kushner — the duo that Donald Trump biographer Timothy O’Brien has snarkily dubbed “Javanka” — who some speculate will be the most powerful people in the White House, next to the president.

During the transition, all signs pointed to Ivanka stepping into the role of de facto first lady — including rumblings about an “Office of the First Family,” widely assumed to be Ivanka’s new HQ, in the East Wing, which is traditionally the first lady’s stronghold. Donald’s current wife Melania, his third, seemed less than eager during the campaign and after to assume the high-profile role of public initiative advocate and White House hostess. She won't even move into the White House until this summer, at the earliest. Ivanka, seemingly poised to step into at least a role in the administration (if not quite an official one), recently announced a leave of absence from the Trump Organization as well as her own apparel and accessories company, and a significant divestment from the real estate company.

But Ivanka quashed the quasi-first lady speculation in an interview with ABC’s Deborah Roberts that aired on “20/20” Thursday.

“There’s one first lady, and Melania will be an unbelievable first lady,” said Ivanka with damning accuracy before laying on vague praise for her stepmother with her characteristic polish and poise. “I’m incredibly proud of her. She’s intelligent, warm, caring. She’s a remarkable person.”

Indeed, Melania looked the part on Inauguration Day in a baby blue Ralph Lauren ensemble that many said evoked a retro style reminiscent of Jackie Kennedy, most glamorous of all first ladies, and the first to engage her own press secretary. Although Wikipedia's editors dutifully flipped the photo of Michelle Obama to Melania on the "First Lady" page moments after her husband was sworn in, Melania has given no public indication that she plans to do much officially, at least for the time being, now that the inauguration festivities are over. Which brings us back to the question of who will fill the first lady role in the Trump White House, one that is largely left up to the occupant to define but has become more and more prominent over the last century.

When Roberts asked Ivanka if she would take an office in the East Wing, she sidestepped the question. “Today my focus is really just moving to Washington, traveling around the country, and listening and getting great feedback on how I can add positive value.”

Raise your hand if you don’t know what that means either.

Ivanka can deliver a polished non-answer like a professional politician, but let’s not forget that when pressed, her peevish, Trumpian side peeks out. Perhaps because she’s “just” a first daughter, Roberts didn’t insist that Ivanka be more specific about her intentions. Perhaps that is one reason why officially maintaining an unofficial role in the White House is distinctly to Ivanka’s advantage. If the press isn't sure whether they'll be covering your Instagram or your policy briefs, it's much easier to work an agenda outside the watchful eye of the public.

Roberts did bring up the fears many women have of a Trump presidency, but Ivanka brushed those women off with a self-assured “let him prove you wrong,” which is kind of like telling tourists to go ahead and give that giant prehistoric-looking alligator skulking around the Florida nature preserve “a chance” rather than assuming it’ll drag you into a death roll if you let it. With a straight face she practiced as a relentless campaign-trail surrogate for her dad, Ivanka reiterated claims she has made before that her father is dedicated to empowering and supporting women, despite recorded evidence to the contrary.

That claim's friction with reality dovetails nicely with Ivanka's Republican convention speech praising Trump's “colorblind and gender-neutral” eye for talent, compared to the Cabinet her father has nominated, more white and male than any since Ronald Reagan's. It would practically be uncouth to hold a daughter to the truth about such claims — who can blame a girl for believing the best of Dad? — which allows Ivanka to be a more effective messenger to the public than even Kellyanne Conway.

Everyone knows Conway is just doing her job when she lays it on thick to smooth over Trump's rough spots. Ivanka doesn't have a job anymore, at least officially, so we are supposed to assume her motives are nothing but pure. But she is his daughter, as she likes to remind us, so she is not even remotely in service to the public. Her loyalties can — and, given the wealth and amount of organizational power that the three elder Trump children have enjoyed despite Ivanka's current level of investment, likely will — lie at home.

The president's daughter, who is accustomed to advising her father, is about to step into a very powerful role with no template for accountability. The issues Ivanka claims to hold dear, and has said she and her father will fight for, are policy issues -- not soft advocacy like "let's encourage kids to read" or "we should all eat better and exercise." Furthermore, they are shared by many women who did not vote for Donald Trump: equal pay for women, affordable and accessible childcare, and maternity leave for "new mothers," a policy that has been criticized for leaving out men and adoptive parents.

This makes Ivanka's position an intriguing one — how can someone who thinks like us and acts like us, many educated and cosmopolitan Democratic voters might ask, defend a man who so clearly doesn't? But those are by no means the only issues Ivanka might counsel her father on. People who find themselves identifying with Ivanka, even if they don't like her dad, shouldn't mistake her for someone who has been vetted and tested in the public eye. Go ahead and trust her taste -- but what do we know about her political judgment?

Without a post from which to advocate for those positions (or others she might take up), Ivanka's ability to influence policy outside her father's office might not be much more than any other celebrity's. Meanwhile, President Trump could downgrade these proposals on his list of priorities at any time. But Ivanka can, if she chooses, keep any counsel she gives her father quiet. Who's to say how she might decide to add "positive value"? We will be regaled with the victories that burnish her brand, and any that don't will surely stay quiet. No matter what happens to women, families or children as a result of the her father's administration, Ivanka can leave Washington whenever she wants, apparently blameless and with her image intact. As an accomplished master of Instagram, Ivanka has demonstrated she understands the value of curating her public face. Those who are placing their hope for the next four years on the charismatic First Daughter must also hope they aren't only seeing what she wants them to see.