A day to celebrate our power: The Women's March provides the first moments of solidarity and happiness since Trump's election

We know the next four years will be hard. But the sheer number of people who came out Saturday brought us new hope 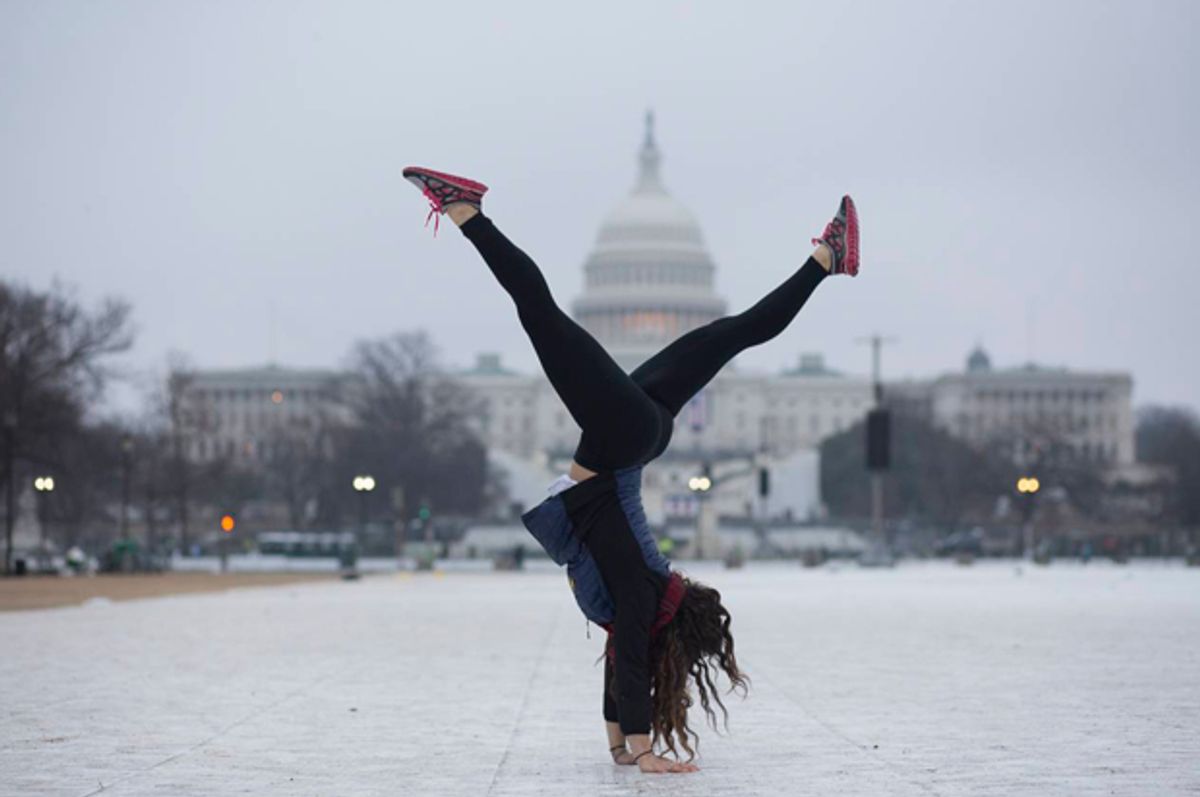 Yetta Stein from Portland does a handstand before the Women's March. (Peter Cooper/Salon)
--

WASHINGTON -- Donald Trump is president. The only question now is whether or not things are going to be really bad or catastrophically bad. Yet somehow the mood on the streets of the nation's capital during Saturday’s Women’s March was jubilant, at times even celebratory.

It’s not that the hundreds of thousands of people who crammed into the National Mall were unaware of the  serious dangers that a Trump presidency presents to both progressive values and to democracy itself. On the contrary, the participants at times seemed overwhelmed by the number of issues they were out there to advocate for, from women’s rights to health care access to criminal justice reform.

But the overwhelming sense in the air at the march was one of validation.

It’s one thing to understand, on an intellectual level, that Trump only won on a technicality and that Hillary Clinton bested him by nearly 3 million votes in the popular election.

It’s another thing entirely to see, with your own two eyes, the crowd that turned out in D.C. The partitioned areas for the rally were swiftly overwhelmed by protesters, who spilled out into the side streets and were so far away from the main stage that many of them never did figure out where it was.

Organizers plotted a march from the National Museum of the American Indian to the White House, but the sheer number of protesters quickly overcame these plans, and they spilled out from the National Mall into side streets. People marched up and down various routes throughout the city, heedless of what official maps said.

The atmosphere of the march was downright gleeful, like watching thousands of people feeling a horrible weight lift from their shoulders.

One woman, overheard on the train, said, “I’ve been in a funk since November and this is the first time I felt better.”

In all honesty, I felt it, too. Every since I wandered out of the Clinton election-night rally in the Javits Center in the early morning hours of Nov. 9, I’ve felt a cloud of dread hanging over my head. It fluctuates in severity, but it never really goes away. I’m constantly haunted by this sense that everything decent in this world has no defense against the depraved orange reality TV host who has somehow stumbled into the White House.

Walking into a crowd of hundreds of thousands of people who simply reject the racist, sexist Trump agenda, however, turned out to be a pretty good palliative to the sense of existential despair I was starting to accept as my new normal.

People’s joy was enhanced by the sense that the anti-Trump crowd far exceeded the Friday crowds that had turned out for the inauguration. (No matter how much the new president and his flunkeys may want to deny it.) Trump and his followers have treated his election as a vindication of the politics of bigotry, but the paltry turnout at his inauguration showed that even his voters are a bit turned off and embarrassed by the whole thing.

Liberals, however, are fired up.

Feminists in particular were out and loud. Kowtowing to delicate male feelings about the nomination of the first female major-party candidate for president — having secret pro-Clinton Facebook groups, dialing back enthusiasm in public, reflexively agreeing that Clinton was "flawed," lest someone screech at you for daring to offer praise — only resulted in a sexually abusive bigot in the White House. What I saw was a crowd of women and their male supporters who felt no shame and had nothing to apologize for.

“Welcome to your first day! We will not go away!” people chanted as they got closer to the White House.

Of course the question hangs in the air: Does this massive protest even matter?

Come Monday, President Trump is still in office. He still has a Republican majority behind him in both houses of Congress, and he is still rapidly trying to undo all the progress made in the past eight years. Deplorable-Americans continue to flock to his side, feeling a renewed enthusiasm for their racism and misogyny.

None of that will change anytime soon. Next week and the week after and the week after, Trump will keep on pretending he won in a landslide and Republicans will use their monopoly on power to push through a retrograde agenda. Even though they know full well that the majority of voters backed not just Hillary Clinton but down-ballot Democrats.

And yet, it was important to have this march. Don’t discount the value of boosting each other's spirits in a time like this. Being reminded that huge numbers of Americans truly believe in the progressive, feminist agenda is an important bulwark against despair.

For me -- and I suspect I’m not alone -- the Women's March had the taste of salvation. Every day, for more than two months, I’ve woken up feeling like I’m looking into a black hole, with little sense of hope to buoy me up. It’s hard to feel that justice is possible in a world that lets Trump be president.

At times like these, having friends is not enough. Social media affirmations are not enough. But standing in a crowd of hundreds of thousands of people waving signs declaring, “Pussy bites back”? That was what I needed to stop feeling so alone and so terrified.

I wrote this without even stopping to consider what Trump might have tweeted about it. That alone suggests that this is a new day.

It’s not over yet. Feminists may still lose. We might look back and feel that the Obama years were a historical anomaly, a brief moment in time when it seemed true progress was possible. Maybe we’ll all look at the Women’s March as the last day we were happy together, before Trump and his minions stomped the feeling of joy out forever. It’s possible.

Or maybe today will be the day that history remembers as the day that progressives started to win again, the day they pulled out of complacency and infighting and came together to fight the real bad guys. Maybe today is the first day of the war that we will win.

Standing on the street, watching people beaming at each other -- at friends, family, partners and total strangers -- with the strange pleasure of resistance, it’s impossible to say how it will turn out. But if progressives have a chance of winning, they have to fight. And on Jan. 21, 2017, the feminist left showed it is ready for battle.