New march, same women's issues: Generations of women bring their daughters to D.C., as mothers did before them

54 years after the last big women's equality march on Washington, America comes together in unity and shared values 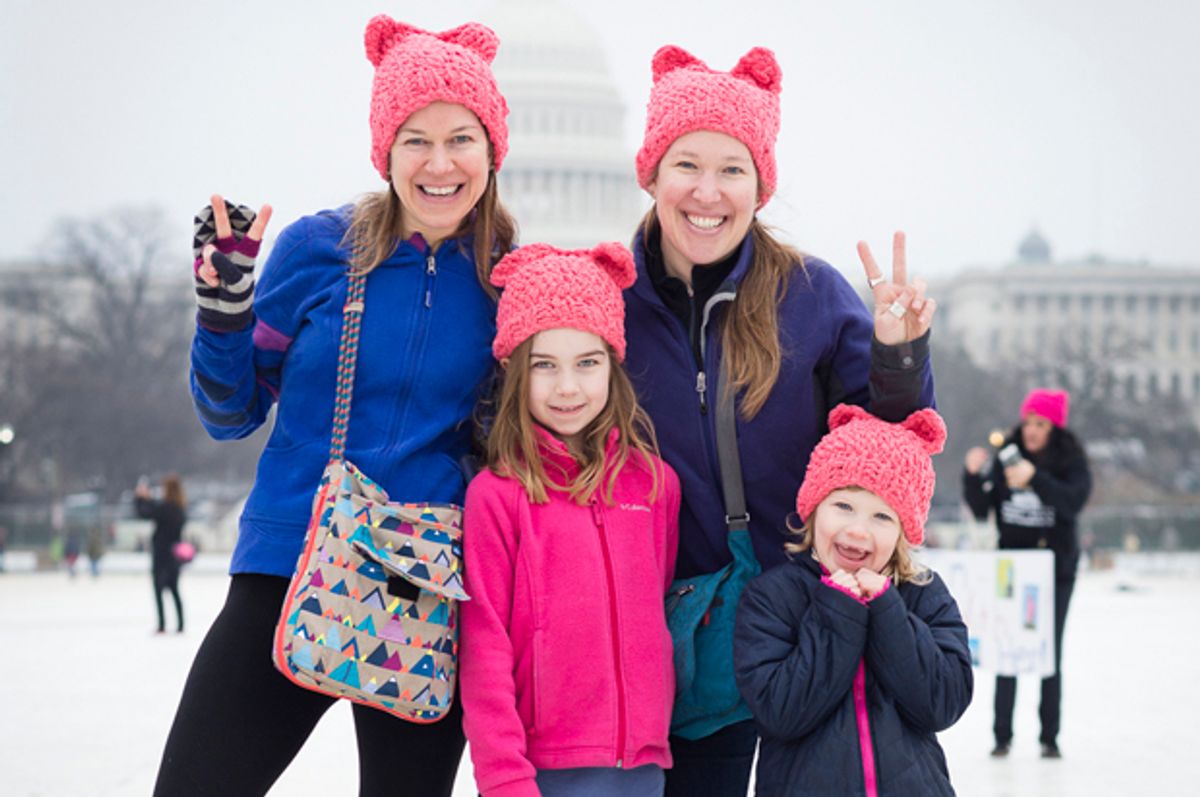 WASHINGTON — There was something familiar in the air on January 21, 2017 — in the weather, in the message and in the millions of women pouring into the city. On an overcast, unseasonably warm day, the tour buses began pulling into the Washington, D.C. area early in the morning. They were full of women, young and old, arriving to stand against discrimination and up for equal rights, equal pay and respect for all. Fifty-four years prior, on August 28, 1963, droves of women also arrived in the same place with the same goals.

Though there were marches on Washington for women's rights in 1978, 1986, 1989 and 1992 organized by the National Organization for Women (NOW), none of the attendance touched yesterday's. And as the world's media extolled the virtues and organization of the women who marched on Washington from the Capitol to the White House, there was one protestor's sign (seen at simultaneous rallies around the world, of which there were at least 70) that seemed to sum up the frustrations of having to advocate publicly, and vociferously, for the same issues all these years later: "I can't believe I still have to protest this s%it!"

While a central theme of the 1963 March on Washington was civil rights and specifically equality for black women and the death of segregation, and yesterday's march had a more far-reaching equality approach, Dr. Martin Luther King Jr.'s message that day is still eerily on point.  It was there that "I have a dream" came forth, and today, many women continue to fight for equal treatment, equal pay, and more — but it might be said now, as it should have been then, that "we have a dream," because indeed there were so very many of us in the streets of D.C. peacefully hammering away at still-pervasive issues. Since November 8, it has been more surreally tangible than ever that the more things change, the more they stay the same.

When I was a girl of about seven or eight, my mother would wake me in the humid, pre-dawn hours of summer in New York City, tell me to dress in shorts, and take me out into the night to meet a bus at Astor Place, a central square in downtown Manhattan. There, smoking buses would be waiting in the early morning light to take us to one of many protest rallies in Washington, D.C. There were ideologies in line with my mom's lefty politics: "U.S. Out of El Salvador!", "Down with Apartheid!", "Tell Reagan No!", and "Stop the War!"  The journeys were long and hot. The days after we arrived were longer, and many of the issues we stood for were the same as those on the table yesterday. Back then, buses came in at a rate of 100 per hour totaling a quarter of a million women, and this time, those numbers were far exceeded.

You might say my late mother attended every rally there was; at each one, she collected buttons commemorating the march, and so at 5 a.m. on Saturday, when I left New Jersey with my nine-year-old daughter, I hastily sorted through hundreds of liberation, anti-racism, Cesar Chavez and pro-equality messages that I have saved for ten years since her death. I pinned one on my daughter's lapel that read "Peace Worldwide for Children." My jacket was adorned with "Stop Racism!", "War is Not Healthy for Children or Other Living Things", a peace dove, and a few more slogans that reminded me instantly of the many fetid and purposeful bus trips I took with my activist mother. Though I didn't much like them at the time, I was grateful to spend time on these jaunts with my working academic mother, who had little time for fun after 15-hour teaching days. And so I found it strangely moving to be able to take my own young daughter to her first rally in support of women, wearing Grandma Bobby's buttons.

My daughter never had the chance to  meet her grandmother, but how thrilled Barbara would have been to see grandmothers, mothers, daughters and sisters marching together in peace, and at many instances, in direct protest of our new president.  I reminded her when we were captive like sardines in the great moving crowd that our comfort was not entirely the point. Some protestors stood out for their vulgar or hostile chants, for which I was angry, and wished I could cover her small ears. The larger purpose of the march was to voice strong platforms for issues that are of great import to women, and girls — not to engender more hostility in an already tense political environment.

Women marching with their daughters largely felt the same way. Rachelle Dyas, a U.S. Marine veteran from Maryland marching for female veterans and an increase in programs for them, brought four children, ages 7, 12, 14 and 15. She had two daughters, and said the girls decided themselves what they wanted to march for.

"The 15-year-old is marching for girls in science in math, and the 14-year- old is marching for [the idea of] 'love your body'," Dyas said. "I hope the world hears that we are united and we are many, and this is how we push change."

"We're gonna make change happen, put these issues in the forefront for the new president, and force him to address them," she added.

Another mom named Rebecca brought her 13-year-old daughter Adelaide. Rebecca said she felt the march was about "people being treated equally, and women having the rights to make our own reproductive decisions."

Adelaide thought for a moment. "For me, this is about being respected by my male peers, and that I be able to do what I like with my life when I want to do it," she said.

K.K. Ottesen and daughter Nadia, nine, came from "just up the road." D.C. locals have participated in a number of rallies recently, including one for Tim Kaine. "We are here to march for equality, and to tell Trump that what he's doing is not right," said Nadia.

Pressed for more detail, she said, "I want him to know that being unfair to women is not OK."

The pair went to the Peace Ball earlier in the week, and Ottesen wanted her daughter to know that it was important to just show up. "This is the first election that kids really paid attention to, and they were stunned the next day," she said.

To combat frustration, Ottesen said she stresses the importance of speaking up. "We talk about the strength of the democracy, and how even one person who makes bad decisions can be stopped by people standing up or using plain old muscle."

Yesterday, when many around the country said marching on Washington was ineffective because it would not change the outcome of a divisive election, more than four million people (including men and small boys) around the world said otherwise. Amidst chants of "We need a leader, not a creepy tweeter!" on Constitution Avenue, young Nadia was thoughtful. "I would say that its important to be here, because you're standing up for your country and showing that you care . . . and you want something to change. Not that you just want it to happen, but you're going to do something about it."