"The Young Pope" creator is "happy that it is a meme on Twitter": Salon interviews Paolo Sorrentino 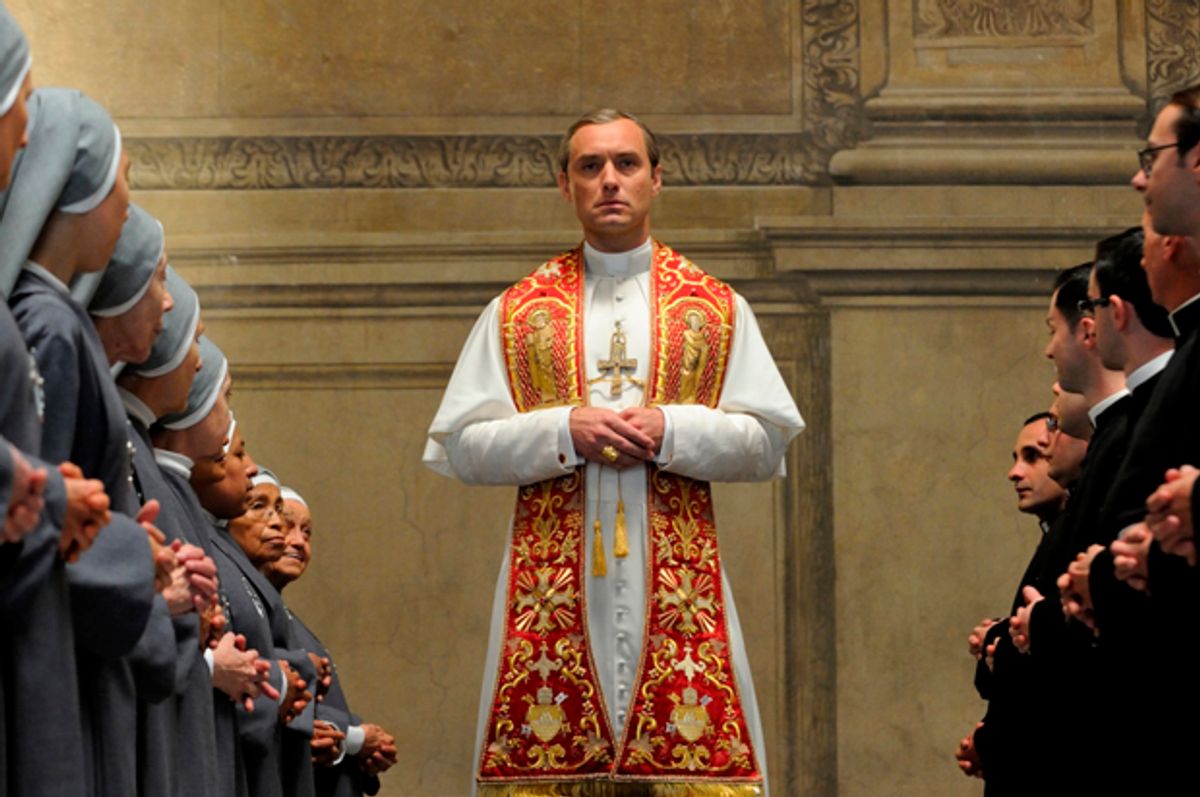 Before American audience got a chance to view a moment of Paolo Sorrentino’s limited series for HBO, “The Young Pope,” it had already become a Twitter meme. The title alone seemed fantastically ludicrous, and that’s before a person absorbs the idea of Jude Law as the man divinely chosen to wear the robes of Il Papa.

Although the jokes abounded prior to premiere, Sorrentino didn’t mind. Contrary to the exclusive vision of Law’s autocratic, control-obsessed religious leader, the filmmaker welcomed the trend’s promotional value.

“As long as there is irony on something, I think it's always a good thing,” Sorrentino told Salon last week, in an interview translated by Italian journalist Silvia Bizio. “This is a good thing because there are so many television series that, to be noticed, one way or another, it's always very important. I'm happy that it is a meme on Twitter.”

The first two installments of “The Young Pope” made their debuts this week on HBO, with subsequent episodes of the 10-part miniseries set to air at 9 p.m. Sundays and Mondays, removing some of the mystery surrounding the series and replacing it with questions about its intent.

“The Young Pope” is without a doubt a work that speaks with an auteur’s distinct cinematic voice, reflecting Sorrentino’s holistic approach to cinema. That is, the visuals, the blocking of a scene, the score and music all play roles that are as active as the dialogue. In this miniseries, Sorrentino seeks to tell the story of the politics of the Roman Catholic church as well as it formality and its grandeur in every aspect of each scenes.

“The idea of the structure of the series was to be very, very rich in dialogue and then, suddenly, this overdose of dialogue would be interrupted by great visual views, like a break, a visual view, which the Vatican allows you to [experience],” Sorrentino said. “The Catholic Church has been, in history, one of the biggest producers of the spectacle.”

It’s also an institution devoted to structure and rules that its adherents must follow in order to be “good” Catholics.  A viewer can experience that aspect of “The Young Pope” in the rigid, formal delivery of its principal actors Law and Keaton, in the saturated colors and unblemished white space in many scenes. We can even see it in the contradictions exhibited by Law’s character Lenny Belardo, the first American pope in the institution’s history and its youngest in some time.

Taking the name of Pius XIII, Lenny is a controlling, polarizing figure intent on leading a retreat from the openness instituted in Vatican II and placing a figurative moat between the church’s followers and its leaders. A number of TV writers and viewers have observed that the limiting, narcissistic tendencies Law’s pope displays bear more than a few similarities to the man set to take up residence in the White House in a few short days.

Amazingly enough, Sorrentino insists that those personality parallels are coincidental; the filmmaker began working on the scripts for “The Young Pope” as he was editing his film “Youth,” which debuted at the Cannes Film Festival in 2015.

“At the base of this character, the question I ask myself is what could be the Pope of the future?” the filmmaker continued. “Some experts told me that it isn't strange or absurd to think that a Pope could emerge the way [I] described him.”

He went on to explain that following more liberal and open periods in the Catholic church, there tend to be era in which the institution returns to more of a hard line.

But what does the relative youth of Lenny Belardo say about Sorrentino’s message? He explains that the Young Pope’s age is less important to the story’s central idea than the tradition with which he was selected.

“In the Catholic rules and regulations, the Cardinals vote for a Pope not on the basis of their ideas and their convictions of who could be the best Pope. They vote because they've been enlightened by the Holy Spirit. The Holy Spirit suggests to them a name,” Sorrentino said.

“In reality, the opposite is true. The Cardinals vote because of political convictions. I wanted to touch on the paradox that the Cardinals would really vote because they've been guided by the Holy Spirit. And enlightened.

“Therefore,” Sorrentino continued, “if they elected a young Pope because they were enlightened by the Holy Spirit, who did the Holy Spirit make them [select]? A charlatan or a holy man?”

Sorrentino previously won the Oscar for Best Foreign Language film for his 2013 feature “The Great Beauty,” and has an ambitious style that some find intoxicating but others may deem emotionally inaccessible. As such, “The Young Pope” has proven to be divisive in its reception and interpretation.  Sorrentino is no stranger to polarizing is viewers. Nor is he a television neophyte, although this is his first series project for an English-speaking audience.

However, he sees little difference between creating a vision for theaters and making episodic series.

“The film screens are becoming always smaller and smaller and the television screens are becoming bigger and bigger. I felt that there was no need to really change my style, going from cinema to television,” Sorrentino said.  “As for the writing, yes, because obviously, 10 hours are very, very different from two. In a film, you look for synthesis. In television, you look actually to dilute the story because 10 hours is like five times a movie.”

“I kept in mind certain basic rules of the TV series and I've tried to do something always different,” he continued. “I was thinking about the great auteur film. It's becoming harder and harder to do an auteur film of four or five hours. When I had the opportunity to do this on television, I was very happy about it. I'm hoping, actually, that more people might be able to follow that. The auteur cinema that you would see only in festivals, now you can see on television.”

Asked to expand upon what he means by minding the basic rules of television, he replied with a confession. “In reality, I only followed one: that each episode has to finish leaving the audience with the curiosity to see the next.”