Women's march on Washington D.C.: Bobbing along in a sea of irreverent resistance

We may have switched out our blue bubble for the pink bubble of protest, but it felt like the healing has started 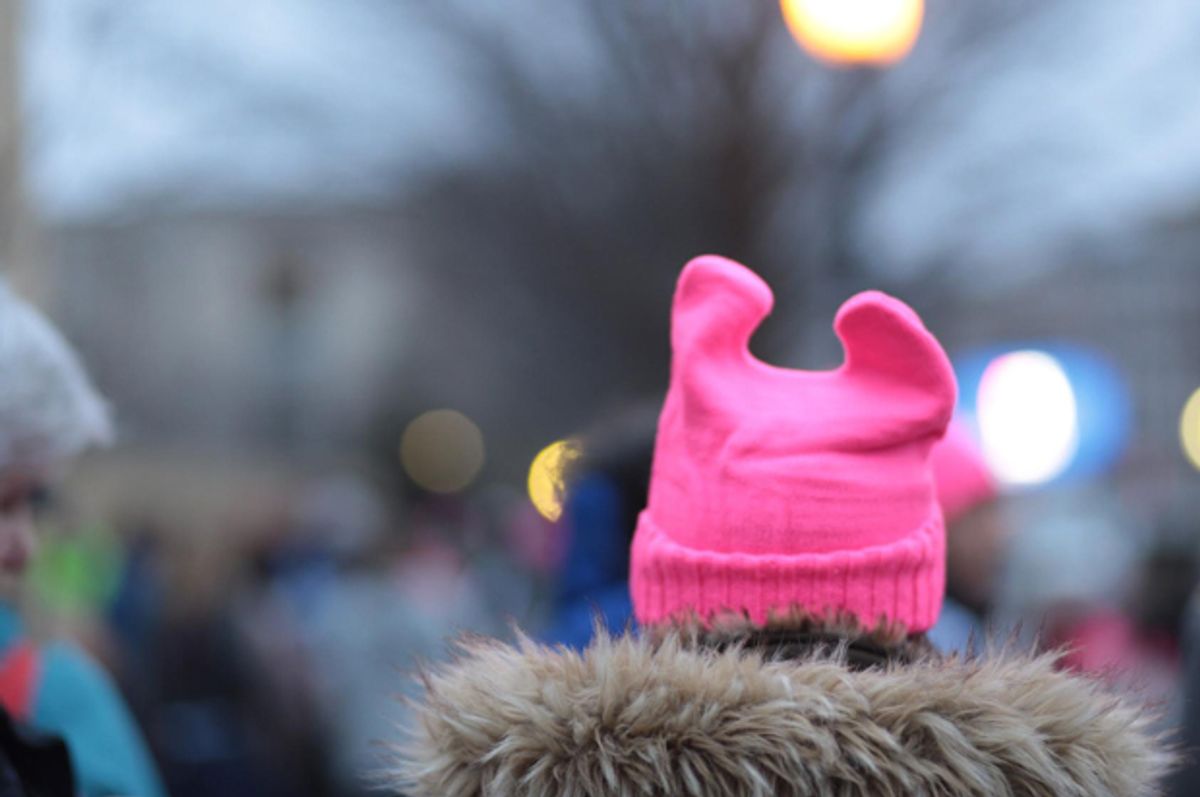 It didn’t necessarily matter to the estimated 500,000 people who converged on the National Mall for the Women’s March on Washington yesterday whether or not Trump paid attention to us. It was enough to show up and live, even for a few hours, inside the pink bubble.

Even though it comes with porta potties and without food or water save what you can carry in your pockets, the pink bubble, a subset of the Democratic blue bubble, is a cheery place.

This was true even though many of the day’s plans were shredded. My group of 12 women, from Rhode Island, New York, Maryland, Washington, and Georgia, left early but still too late. The Metro, full to bursting mostly with women wearing hand-knitted pink hats, passed us by. We backtracked, taking the subway in the wrong direction until we could dash across the platform and catch the right train that, at least when we boarded, had room to spare. Finally we, along with hundreds of other women, came out on the street and joined an exponentially expanding stream of marchers heading to a pre-march rally headlined by Ashley Judd, Scarlett Johansson, Madonna, and other stars who usually come to town just for the White House Correspondents’ dinner. We had each other’s cell numbers and the Life 360 smart phone app designed to find anyone of us who strayed too far, but by the time we reached the Mall, 10 of the 12 of us had gone missing. My friend Sara and I clung together like we were on a life raft bobbing in the Atlantic. So many people using so many cell phones — to find their missing friends, I imagine — made the Life 360 app useless and our phones unable to connect.

Stuck in a throng Sara and I met Renee Parsonage, 27, who had come from Winston-Salem, N.C. on an all-night bus ride. It was worth the trek to make sure that her 1 year-old daughter has the same reproductive rights in 2037 that women have in 2017. “I lost a lot of friends in the election,” she said. But the signs and cheering and like-minded people as far as she could see in every direction are “restoring my faith in humanity,” Parsonage said.

Although she was “trying to remain positive,” Renee’s mother-in-law, Helen Parsonage, 57, said, “I can’t believe we’re still protesting this shit. I’ve been protesting for women’s rights and reproductive rights since the 70s. . . It’s nice to see the next generation here, but it’s depressing that they have to be. I thought our right to abortion was a done deal. I thought we had accepted that this was a diverse country.”

If you are not “a white male billionaire,’ Helen said, you’re lesser. I’m here to say, ‘not with my consent.’”

Surrounded by people with strong convictions and no sense of which direction we should be heading, we finally wedged ourselves into a group watching the rally on a Jumbotron too far from the screen to hear. Many had lost their people. Hats ranging from rose to magenta were no help in identifying old friends. While we waited for the march to begin, women from Washington state, Wisconsin, Florida, Tennessee, upstate New York, and parts in-between — and the men there to support them — chatted like longtime friends, amiable and patient, waiting for one o’clock when the march was set to start. One baby-boomer who broke in his first pair of marching boots in the 60s, seemed gleeful as he chanted, “The people united will never be defeated.” The crowd ranged from a seven week-old “baby feminist,” as her mother from Baltimore described her, to those well into their ninth decade. “I’m 82,” one woman’s sign read. “I’ve seen so much progress in our nation! Don’t turn back the clock!”

Sarah and I stood, crushed in our six square-inches of space, and soaked up the rare feeling of solidarity.

Unlike the preprinted, red-and-white “Make America Great Again” signage that dominated Trump campaign events, most marchers went with handmade originals, held low because sticks, along with all backpacks not made of clear plastic, were prohibited. They ranged from heartfelt to angry to single issue concerns. The list of grievances was long: climate change, Black Lives Matter, Putin, and the most common, reproductive rights. There were stick-figure pictures of cats with the wording, “This pussy bites back” and graphic images of women’s body parts. “I haven’t seen the word vagina printed so much since the 90s,” Sara said.

Other messages were incoherent: “Feeling uncomfortable is a necessary part of unlearning oppressive behavior.” And another: “Feminism must be intersectional.”

“Grad students should not be allowed to write signs,” Sara said.

Some were funny like the 10-ish-year-old-girl who sported a sign that read: “This shit would never happen at Hogwarts.” I liked the “Special Trump Sandwich: White bread full of baloney with Russian dressing,” “You can’t comb-over hate!,” and “I’ve seen better cabinets at IKEA.” Then there was “I didn’t survive Dubya for this.” But my favorites played off the new first lady: “Run, Melania,” “If Melania won’t live with him, why do we have to?” and “Melania, blink twice if you need help!”

The crowd was so dense, that it made the New York City subway at rush hour seem spacious. Some intrepid souls managed to scramble into trees. Others stood high in the air on a thin ledge of the pueblo-like Smithsonian museum, behind the steel letters Museum of the American Indian. Sara and I inched our way through the masses only to find that we’d had a better view of the Jumbotron before we moved.

By 2 p.m., an hour after the march was supposed to start, our corner of the world began to grow edgier. “With all due respect,” one woman said, “I think we have a grasp” of the issues, as yet another activist took the stage we never reached. “I am hungry!” another woman called out. “I am angry! I have to pee! I want a cocktail!” Two women trying to go in opposite directions got in a tiff. We heard an older man confess to his friend that he was feeling claustrophobic. A woman at the top of the crowd fainted but didn’t collapse. There was no place to fall. Somehow people managed to pull back to give her space to lie and to let a doctor through.

“Oral surgery was better than this,” a man said.

By then a rumor was circulating: The crowd was too big for the march to go forward. The wave of people might be too much to move. The organizers considered cancelling.

Finally the march toward the White House started, although along a new route starting on Constitution Avenue. The police cars and ambulance that oozed through the crowd with flashing lights were the only official presence we’d seen all day. But it felt festive — the first celebratory moment since the election ten weeks ago. Later, at an Irish pub, Sara and I ran into a man who confirmed what we felt. “The big problem today was too many people, and that’s not a problem,” he said.