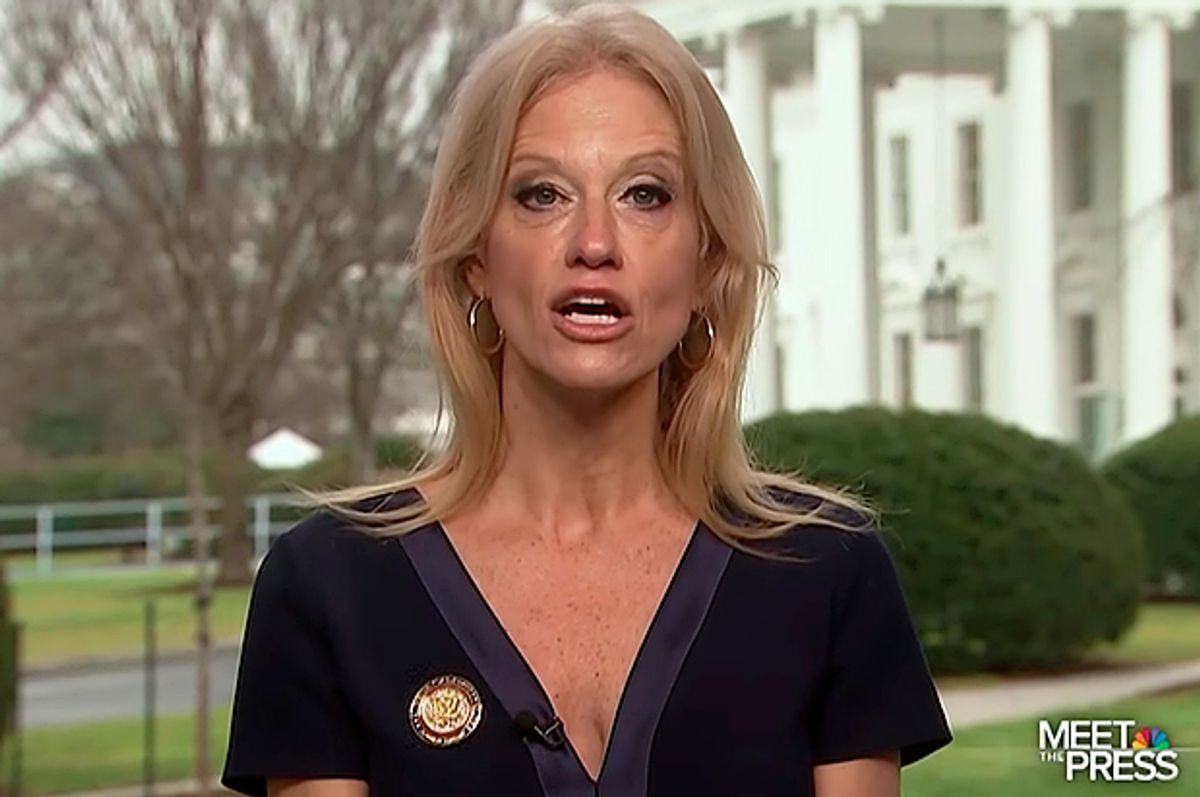 The first 72 hours of Donald Trump's presidency have been as exciting as we might have anticipated. He got things rolling on Friday with a dark, dystopian inaugural address like nothing we have ever seen. He spoke of “inner-city poverty, crime and drugs and gangs” and “rusted-out factories scattered like tombstones across the landscape of our nation.” He placed the blame for all those ills on the presidential predecessors and political colleagues sitting behind him on the dais. He declared, "This American carnage stops right here and stops right now."

That's actually quite a clever promise. Since the hellscape he described is a figment of Trump's imagination, it will be easy enough to say "abracadabra" and convince his rabid followers that he's made it all better. The rest of the country and the world, however, will remain chilled to the bone by his distorted vision of reality. The country Trump says he's leading is a country that doesn't exist. And he seems to have no knowledge or interest in the one that does.

On the night before he was sworn in, Trump lied about the inaugural concert at the Lincoln Memorial — which featured mostly unknown acts — telling the attendees that his team had come up with the idea and that if such a thing had been done before, "it was very, very seldom." Of course that's not true. Former president Barack Obama had a huge bash there in 2009 featuring Beyoncé, Bruce Springsteen and U2, among others, and it's where George W. Bush held his inaugural opening ceremony.

The inauguration parade was so poorly organized that some stands were largely empty, even near the White House where the president and family stood to watch. And the swearing-in ceremony and inaugural address did not receive anywhere close to the huge crowds that came to Obama's first inauguration. Perhaps Trump's team couldn't have done anything about that. But one might have expected that a man who constantly brags about his talents as much as he does could have pulled off a spectacular event. Like the amateurish Republican convention in  where he was nominated, it was a dud.

Instead of acting like a leader and moving on to the important job of being president, Trump obviously spent his time watching TV pundits — as usual. He became angry and upset that news reports indicated his inauguration was sparsely attended, which it was. So on Saturday he went to a scheduled event at the CIA headquarters, where he behaved boorishly in front of the Memorial Wall: He talked incessantly about himself, falsely denied that he had ever criticized the agency, falsely inflated the crowd size at his inauguration, excoriated the media and insisted that agency employees can trust him because he's "like, a smart person."

Later that day, in one of the weirder moments in presidential history, Trump sent out press secretary Sean Spicer for his first briefing, in which he declared with angry gusto: "That was the largest audience to witness an inauguration. Period. Both in person and around the globe." Spicer cited more lies and misrepresentations as "proof." PolitiFact rated the whole performance "pants on fire."

A presidential press secretary lying outright to the media about easily disprovable facts is odd, to say the least. It is almost as if he were literally saying, "You can believe me or you can believe your lying eyes." At this early stage the Trump White House is banking on the the fact that his followers, the only Americans he seems to believe matter, will always choose to believe their leader and his minions over the "dishonest" press.

Presidential counselor Kellyanne Conway appeared on NBC's "Meet the Press" and unleashed a torrent of unresponsive rhetoric when asked about Spicer's performance by Chuck Todd and angrily complained that if he continued she was "going to have to rethink our relationship here." She finally said that Spicer simply provided "alternative facts." It was an echo of a similar comment made by another Trump mouthpiece CNN commentator Scottie Nell Hughes, who in December said that Trump's absurd insistence he won in a historic landslide was perfectly legitimate because “there’s no such thing, unfortunately, anymore as facts.”

The Trump people aren't trying to hide behind their patented propaganda that the media is "liberal" and therefore politically biased, as Republicans have done for decades. That strategy served the party very well while its minions created an alternative media structure to offer their own ideological and political slant on events. It has been a long time since conservatives trusted anything other than right-wing media to help them understand current events.

This is a different approach, perhaps out of necessity due to Trump's obvious unfitness for the presidency. In the past, disputes always hinged on the interpretation of facts — not the facts themselves. Trump and his staff are essentially saying anything that reflects negatively on them can be labeled "fake news" and replaced with their own "alternative facts."

As Greg Sargent noted in this Washington Post article a couple of weeks ago, this situation could lead us into dangerous new terrain:

Trump’s unprecedented dishonesty and his refusal to revise his claims when they are widely called out as false . . . starts to smack of an effort to stamp out the very possibility of shared agreement on the legitimate institutional role of the news media or even on reality itself. It’s easy to imagine that, if and when a news organization uncovers potential conflicts, Trump will simply deny the reality of what’s been uncovered (“fake news”) and begin threatening “consequences” towards that organization.

On the first day of the Trump presidency, the press secretary went before the cameras and angrily derided members of the press for telling the truth, offering up more lies to "prove" his point. The next day the president's counselor called those lies "alternative facts" and claimed that she would have to re-evaluate the White House's relationship to the journalist who asked her about it. Trump himself lied about the CIA's role in leaking to the press.

It is hard to know whether these people believe their own falsehoods or are cynically trying to manipulate reality to cover up for their ineptitude or worse. As much of a cliché as it might be to say this, this situation is literally Orwellian. A quote from "1984" was widely shared on social media over the weekend. It comes from a passage when Winston Smith reflects to himself that "the obvious, the silly, and the true had got to be defended":

The Party told you to reject the evidence of your eyes and ears. It was their final, most essential command.