Poker for girls: In New York's male-dominated world of underground poker, I found my true strength

Like many "good girls" of my generation, I made myself small. In the game I became a warrior, larger than life 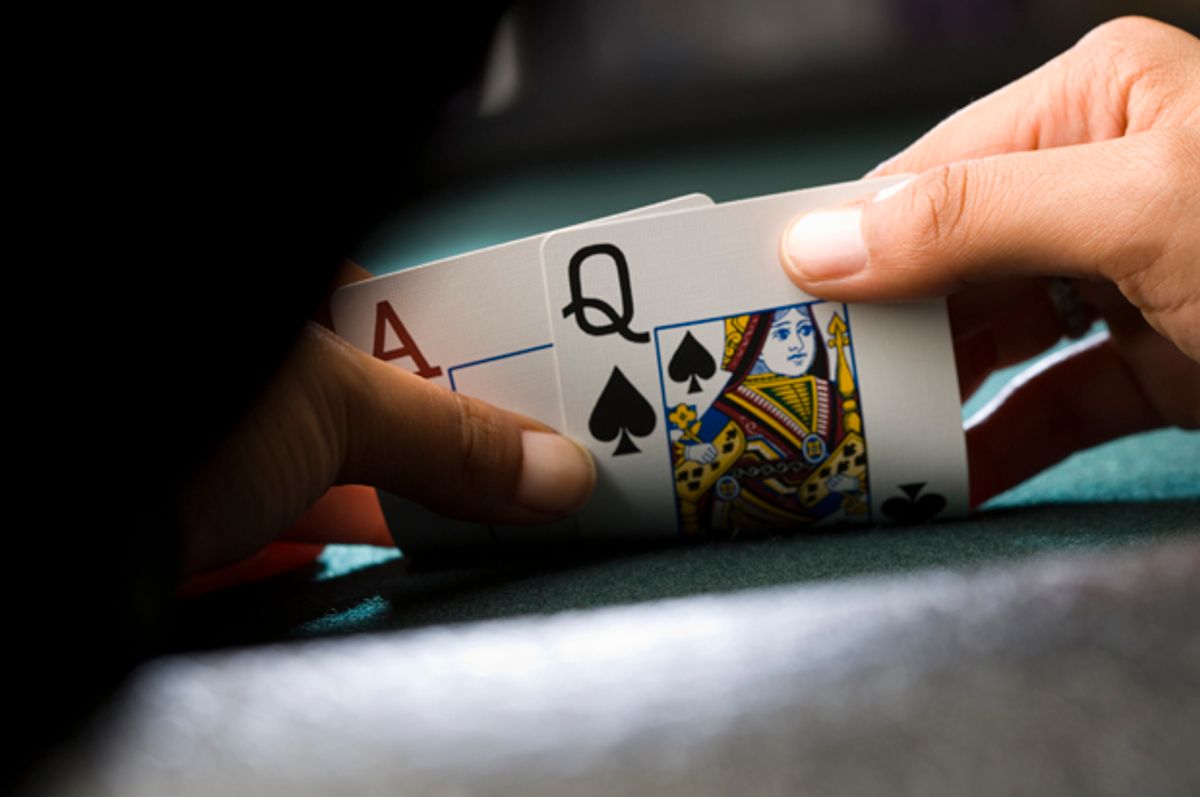 Poker is war. A kill-or-be-killed conquering thing. Boy-world supreme and a party I crashed. In middle age.

A serial outsider, at 55 life felt capricious. A divorced Lower East Side writer, anxious about death, I hated my freelance work in finance and yearned to publish a dazzling first novel. I belonged nowhere.

My redemption was a gorgeous accident at a corporate networking event where I first learned the game of Texas Hold'em — a bustling all-girl affair full of polite, helpful exchanges between tipsy, powerful women until cards were in the air and our competitive natures were unleashed. That harmless encounter in a midtown skyscraper shocked a long-slumbering willfulness into being, a Frankenstein lightning bolt of energy and resolve. I rose from the experience committed to mastering one of the most fiendish mind games ever invented.

Like countless “good girls” of my generation, the message was “be tiny.” Reduce like a white sauce and privilege masculinity. With few success models, I wasted decades feeling jealous of other lives, my sense of purpose mostly buried alive until 50 years out my passion for poker on New York’s illicit underground scene exploded. The game teased my domination muscle, offering me a radical new identity rooted in the idea of warrior. Across weeks and months, as my poker id became itself, I had to yank myself from the gloomy tar pit of self-sabotage and doubt, rinse off the failure goo, and see myself as heroic. Every hand I played was, in some quiet way, revolutionary.

Poker was a tile of intellectual privilege crashing into place, defining me as a gale-force mistress of pot odds and bluff ratios. I studied the combat impulses of boy grinders who colored outside the lines, their aggressive second skin reflecting the privilege of male dominance. I got better at the supremacy stuff and loved the feeling of power and control. I reveled in confrontation and structured violence. I soon took a permanent seat in a deeply sexist universe because when consumed in a hand, my pistons fired differently.

The city’s illegal 24/7 ecosystem had a magnificent beating heart and a life of its own. When I played at my regular $1/$2 action-laced Queens spots, I was no longer the trembling 9-year-old locked in a plush bathroom with rose-petal walls, hiding from a stalker. I fell in love with the game because on the felt, aggression was life. A girl in name only. No smiling required. No deference. Poker demanded I be militant and I played for the child I was. My new rogues’ gallery and global poker community was a heady boy’s brew of hard-chargers where, in the high-profile, televised tournament culture, twenty-somethings were millionaires and thirty-somethings felt old. A staunch feminist, this new life was filthy with contradiction.

I was the sailor. Poker the siren. I played on.

I had grown up flush in Beverly Hills comfort for a short time. We lived in a sprawling one-story house with a swimming pool that glowed in the dark. My father, an aggressive card player who never let children win, coped with a financial downturn as best he could with a large family to support. Suffice it to say, I learned wealth poorly. Anxious to penetrate more of the New York scene, a friend got me into a seedy Lower East Side $2/$5 waterfront affair, part of a tricky circuit where police raids could happen and big men with fat hands managed the money. New pals there gossiped about other games to which, night after night, I flew. Racing home at daybreak, flying over bridges in black town cars with hundreds in my zippered pockets, my father’s decayed financial life was never far from my thoughts.

They say we’re attracted to the edges of who we are. Against every expectation, I came to adore off-the-grid experiences and a touch of the forbidden. I trusted a community that defined itself by the unseen. Codes and secret passwords and stolen glances. New York is a city on steroids, its poker scene equally alluring. I approached every joint, with its probing security cameras, glued to the hip of Raymond Chandler. Often the only girl seated, this raucous underground boy’s club likewise reflected New York’s breathtaking diversity. My sometimes-loving, sometimes-nasty rivals were Chinese or African-American or Puerto Rican or Indian or Romanian or French or Korean or British, wearing tailored suits or hoodies or stained t-shirts, getting stoned or drunk or hawking strip clubs or laundering their sadness when, say, a friend with benefits stopped giving them head. At best, my poker life was dreamlike.

Like post-modern saloons tossed across a lawless metropolis, poker sites were crappy or upscale, honest or crooked. Chinatown spots ran beneath laundries, drippy steam oozing from crumbling brick. Seductive Tribeca venues tempted me with top-shelf vodka and high-class grub. Running safe comfy games, I counted on Brooklyn hosts for profit. They honored a biblical code and kept secrets, given the Hasidic Jews who showed up to smoke, watch porn, not shake my hand, and lose their stacks. Bouncers with fleshy crooked smiles in sprawling midtown joints flirted and watched over me. The smaller one-table games competed with the richer operations, working tirelessly (like wives) to keep regulars like me happy: gum, Chicken Lo Mein, phone chargers, espresso, name it. Scale aside, every game was loaded. Thousands of dollars slid quietly in and out of drawers as chips were bought and cashed, the sheer magnitude of dollars charging the air.

As in any combat sport, comfort zones are for amateurs. Tougher players pushed me. You could only get to Luka’s Hell’s Kitchen game through a service elevator at the end of an alley that stunk to the heavens from putrid summer trash. Through the years I fell in crush with any number of charming grinders. But I hated most of Luka’s players — supercilious, hot-rod, loose-aggressives punks, walking ATM machines for the better players who had the skill to vacuum their wallets. The game’s power dynamic is simple: be vulnerable and die. Routinely I got to Luka’s games anxious, furious those knuckleheads had made me so. My terror was a billboard. Naturally they devoured me — one of many tests along the way. I weathered huge losses against those fetuses before I got my play straight.

The more normal games respected women. But the bawdier joints were X-rated locker rooms with overhead porn, boys picking women’s bodies apart in their wicked endearing man-banter. It was a crapshoot whether the tits-and-ass portion at the saltier games would offend me. Was I self-hating for tolerating it? In grammar school I was too tall, girls were vicious, and I sought refuge with the boys at recess. Did my gutter-mouth femininity let men disappear me? Patriarchy aside, maybe I suck as a girl ’cause I do love boyness. Frankly, I’m like them. Poker seduces my vulgar tomboy nature into a kind of exquisite bloom. My f-bombs are now legendary.

Several years in and nurturing a pro run, my rebellion is no longer a bluff. I’m a girl in happy battle disrupting the power grid, the lone member of my own Fight Club.

I respect and dread this merciless sport in equal measure. The nights when I win and bring home the gold I’m disoriented, a stranger to the child within. In the spirit of ancient primal counsel she urges me to flee, warning of ruin. “Stay silent and small,” she murmurs. “Disappear.”

Poker is grace. When I was 5, I had a wicked poker face that ate my smile alive because those years were brutal. Decades later I summon that face defiantly and hustle off the old trauma. I work the girl card and compete for dear life.

A devoted fiction writer and poker grinder, Eileen is writing a memoir about her consuming passion for the game. She can be reached at www.suttonstories.com.