"Alternative facts" in the Situation Room: How will the Trump administration handle a real crisis?

If the Trump White House lies about crowd-size data, how will it deal with a terrorist attack or major disaster? 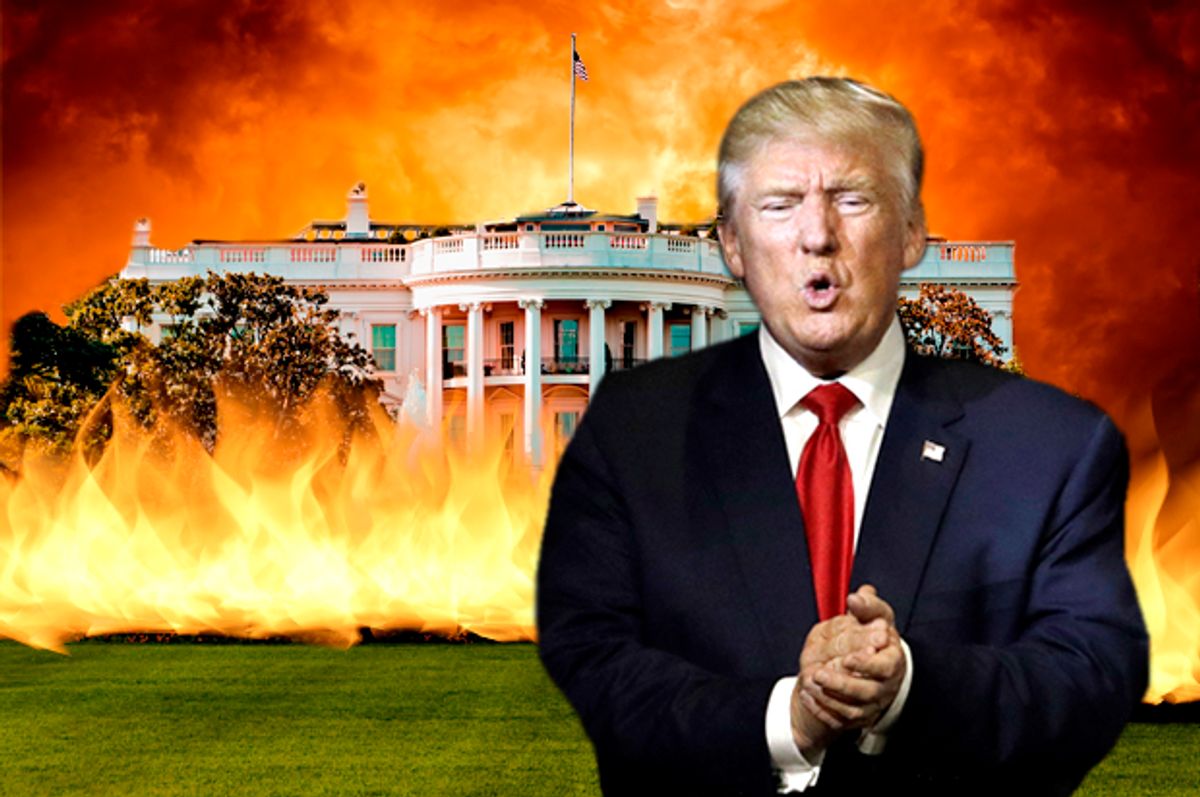 We’re not breaking any news by observing that President Donald Trump’s status as a voracious consumer of social media and cable news, mixed with his obvious insecurity and notoriously thin skin, form a cocktail of madness that makes him easily vulnerable to manipulation. Throughout his first weekend in office, it was abundantly clear that the new chief executive can be bullied into lashing out with lies and incoherent rage. So, really, nothing’s changed since Trump first launched his Twitter account in March 2009.

When White House press secretary Sean Spicer announced that Friday’s inauguration had the largest audience of any previous inauguration, which was demonstrably false, the disconnect with reality sent shock waves of disgust and anger throughout Washington and especially the political internet. And rightfully so. Spicer’s statement was likely spurred by Trump, who simply refused to grasp that his big beautiful party wasn’t so big after all. The New York Times reported on Monday that Trump felt personally “injured” by the actual news of his lackluster inaugural turnout. And it was all triggered by social media and cable news.

Consequently, Trump shoved Spicer into the press room to lie for him. This move was as obvious as any guy boasting on a first date about his less-than-impressive penis size. It was a fish story intended to manufacture a distorted reality — to inject just enough doubt into the right-wing media and the minds of American voters, calling into question the official estimates and the myriad photos we all witnessed with our lying eyes.

Trump’s deception was made exponentially worse when presidential counselor Kellyanne Conway, with her insufferably automated skills of spin and deflection, told Chuck Todd on Sunday’s “Meet the Press” that Spicer was simply presenting “alternative facts.” For instance, Trump’s estimate of a gazillion people at his inauguration was an “alternative fact.” Well, no. There are facts and there are nonfacts — also known as lies, untruths, propaganda and disinformation.

NBC News’s Katy Tur said on the air recently that Trump is creating his own truth, and it’s the only truth that matters to him. She was, of course, correct. And it’s immensely dangerous.

Now that the “alternative facts” memes have run their course and the hashtags have circulated, there’s one very serious question we all need to ask: How will the Trump White House handle a major crisis? In such a case, will Trump, Spicer, Conway and the rest of the regime tell us the truth about things like troop deployments, civilian or military casualties, details about what happened and how they plan to address it, precipitating factors and so forth?

The idea that’s haunted me for the better part of a year now has been “crisis Trump.” How will the president comport himself in the aftermath of a major terrorist attack or during a military strike against, say, Iran or North Korea? Hillary Clinton warned us that anyone who can be baited with a tweet shouldn’t have access to the nuclear codes. While that is certainly true, it only begins to summarize the myriad dangers inherent in Trump’s ability to manage a crisis. We know that he’s easily baited, as evidenced by his reactions to both the historic Women’s March and inaugural Crowdgate, and we also know that he is intensely erratic and unpredictable (in a bad way) and has terrible judgment and an adversarial relationship with the truth.

Therefore, it’s entirely possible — in fact, it’s practically inevitable — that his temperament will precipitate some sort of an attack on the United States or its interests. Anyone with a basic understanding of international relations and national security knows that a weak and incompetent leader who simultaneously projects unearned bluster is exactly the kind of leader that enemies will be motivated to test. They will calculate that he is likely to make all the wrong decisions. If ISIS operatives and the like have been monitoring the American news media and internet recently, they will also know that the Trump White House probably won’t be honest with the American people and will likely exacerbate a crisis due to fear, unsteadiness and incompetence.

If there is another terrorist attack anywhere close to the scope of 9/11, we’ll be faced with a crisis-management team in the Situation Room headed by a man who sent Sean Spicer before the press corps to lie about the size of a crowd. How can we possibly expect the truth when it comes to matters far more serious than aerial photos of the National Mall? We ought to be prepared for the possibility that in a serious crisis Trump will fabricate “alternative facts” that augment the alleged brilliance of his response, while perhaps avoiding the truth about how the attackers circumvented his “big league” national security apparatus or about who, specifically, the attackers were. Scarier still is Trump’s close association with BS artists like Breitbart News and Infowars, which is already spreading allegations that a “shadow government” is plotting a coup against the newly installed commander in chief.

Most politicians bend the truth. Trump appears to have little or no concept what the “truth” actually means. Words do not carry the same meaning for him that they do for others (or at least used to). To claim he received a “mandate” and has appointed a Cabinet with the “highest IQ . . . in history” is literally meaningless. If everything’s an “alternative fact,” facts no longer exist.

One can almost think of Trump as the most infuriating Twitter troll you’ve ever confronted. Just last week, for example, several of Trump’s disciples told me on Twitter that Senate.gov, the Kaiser Foundation, the Congressional Budget Office and the Senate Intelligence Committee are all spewing “fake news.” In addition to Trump, we’ll be faced with roughly 37 percent of American voters who will expect Trump to retaliate against an enemy based on “alternative facts.” Making matters worse, we’ll have allies with their own intelligence agencies who will dispute Trump’s claims, while privately wondering whether anyone can rely upon the last superpower to make sane, much less correct, decisions in a crisis.

Trump doesn’t realize or care that Britain, Canada, Germany, France, Japan and our other allies won't necessarily be willing to go along with his wholly invented version of the facts. That could make it all but impossible for Trump to form a workable coalition to deal with whatever insanity he might unleash in response to an attack or some other major crisis. America could well be forced to go it alone under a president given to tweeting gibberish at 3 a.m., dramatically increasing the risks of failure. It’s impossible to game out the domino effect that might follow such a failure. Hell, I haven’t even mentioned the Russian angle to all this, and the apparent risk that Trump might act in the sole interests of the Kremlin, especially if it's true that Russian intelligence has compiled volumes of "kompromat" about him.

Trump’s White House may well make the George W. Bush White House look like a pillar of unwavering competence and steadfast veracity. Under that administration, an incompetent leader led us into two destructive wars based on lies, along with a $1.4 trillion deficit and the Great Recession. Faced with a truly dangerous crisis, and without objective truth as the foundation, this one could be even more devastating.