Federal employees have broad rights to tell the public what they know, which is bad news for President Trump 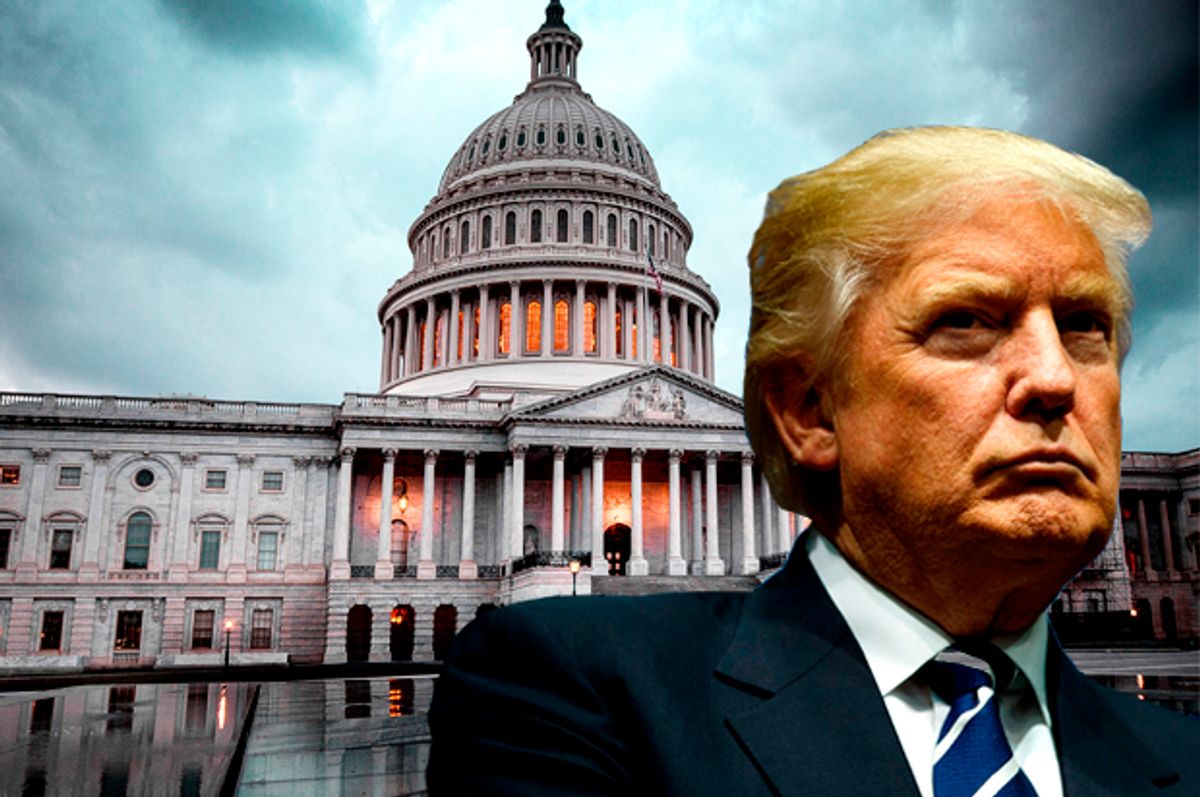 For decades now, one of Donald Trump's main weapons has been the nondisclosure agreement, known in the business world as the NDA. Such contracts generally require the person signing it to remain publicly silent about anything he or she learns over the course of a job or business arrangement. Interestingly, the agreements that Trump used in his real estate business also forbade a signee from ever offering any public criticism of Trump for the rest of time.

As the infamous "Access Hollywood" tape shows, Trump likely has good reason to want everyone he interacts with to be bound to silence about their experience, which is why his lawyers compulsively force these contracts onto literally everyone that they can: his employees at the Trump Organization, his campaign staff, his transition team and so on.

His wives have all signed prenuptial agreements compelling their silence, and he has threatened to yank alimony to keep it that way. Unsurprisingly, Trump also forced Miss Universe contestants to sign contracts denying them the right to criticize him publicly or reveal anything they learned about him. (Alicia Machado, a Miss Universe winner who publicly shared a story about Trump fat shaming her, won her crown before Trump acquired the beauty pageant. This may be why she was able to speak more forthrightly than other contestants.) Trump even tried to force his campaign volunteers to sign nondisclosure agreements.

Needless to say, the man (or his lawyers, anyway) is terrified that the people he interacts with will garner unpleasant information about him, and he is vigilant about making sure they are legally prevented from sharing it.

So what happens when someone who is so uniquely afraid of leaks is elected to high public office? Can President Trump continue his habit of making sure that everyone who has even incidental contact with him is forced to be silent about what he or she will know forever? Will Trump be able to legally bind the thousands of public employees who are about to learn quite a bit about him from sharing that information with press?

Well, he's only been in office for a few days, but already there are indications that Trump and his team will try to do just that. Kate Sheppard of The Huffington Post reported Monday night that the Environmental Protection Agency was ordered by the Trump administration to freeze all grants and contracts, and that employees were told not to speak to members of the press about it.

Monday afternoon, before that story broke, I spoke on the phone with Orly Lobel, a law professor at the University of San Diego who has done significant research about employees' speech right and the practice of using nondisclosure agreements and written the book "Talent Wants to Be Free: Why We Should Learn to Love Leaks, Raids, and Free Riding."

The first thing Lobel emphasized to me was that Trump cannot legally force federal employees to sign nondisclosure agreements. That said, the government does enjoy some rights to muzzle employees — but, she noted, strong legal limits exist on how much silence the executive branch can require. Government employees enjoy broader rights to speak out than Trump traditionally prefers when it comes to those who work with him.

"They’re civil servants and they’re bound by the rules of keeping confidential information and not exposing government secrets to the public, but that is all balanced by the right to speech," Lobel explained.

Even though the Supreme Court found in 2006 that government employees can be barred from sharing work-related information with the general public, "all the justices agree there’s a violation of your First Amendment rights if it’s a matter of public concern and if you’re speaking externally" in public venues, Lobel noted.

Basically, the rule of thumb is this: A public employee is allowed to speak publicly or share information with the media, if that information is not considered a government secret or classified information.

There is a "legitimate interest of the public," Lobel said, in knowing about "corruption or wrongdoing or impropriety" inside the government.

That legitimate interest, the government has argued in the Edward Snowden and Chelsea Manning cases, must be balanced against the right of the government to keep certain things secret.

Not everything the government would like to keep quiet, Lobel explained, will be viewed as a legitimate secret by the courts. In most cases, the government has to argue that keeping information under wraps is a matter of national security. Otherwise, the public's right to know overrides the right of the government to keep it a secret.

“Anything that involves Trump as a president, anything improper about his behavior that would not be in the category of national security concerns" would likely fall into the category of the public's right to know, Lobel said. He could not contractually forbid employees from revealing such information.

There are some exceptions. Leaders of agencies or anyone who could reasonably be seen as the voice of the administration can be fired or otherwise punished for criticizing the president, his policies or other leading officials. But for ordinary federal employees who are not political appointees — such as the career bureaucrats that work for the EPA — leaking unflattering information about Trump or criticizing him to the press is largely protected speech.

Because of The Huffington Post story and some ProPublica reporting, we know that at least one and likely several EPA employees are leaking information to the press about what the Trump administration is doing. They are doing so anonymously because they understandably fear retaliation.

A similar BuzzFeed story suggested that Department of Agriculture employees are being intimidated into silence about their work.

Should the Trump administration find out who talked to reporters and seek to retaliate against federal employees who leak unflattering material, there is good reason to believe that these employees are legally protected. An internal government decision such as the EPA's freezing all grants and contracts is a matter of public concern and is not a matter of national security. That makes it difficult for the Trump administration to argue that it has a right to silence these employees.

There's a very real danger that the Trump administration will seek to defend such actions in court and establish broad authority to muzzle government employees for all sorts of reasons. Trump is notoriously litigious, after all.

But doing so would come at a high political cost. Right now, there is considerable public discussion about the value of leaks. Today many members of the public and the media support the right of leakers, unless they share classified information that threatens the lives of government agents or that endangers national security.

Trump himself leaned heavily on leaked material, both legal and otherwise, during his campaign against Hillary Clinton. Retaliating against those who leak genuinely relevant information is not a good look for the new president and would only add to the pile of political problems that the Trump administration is accumulating by the day.