Lemme take a selfie: The art and vanity of protest photography 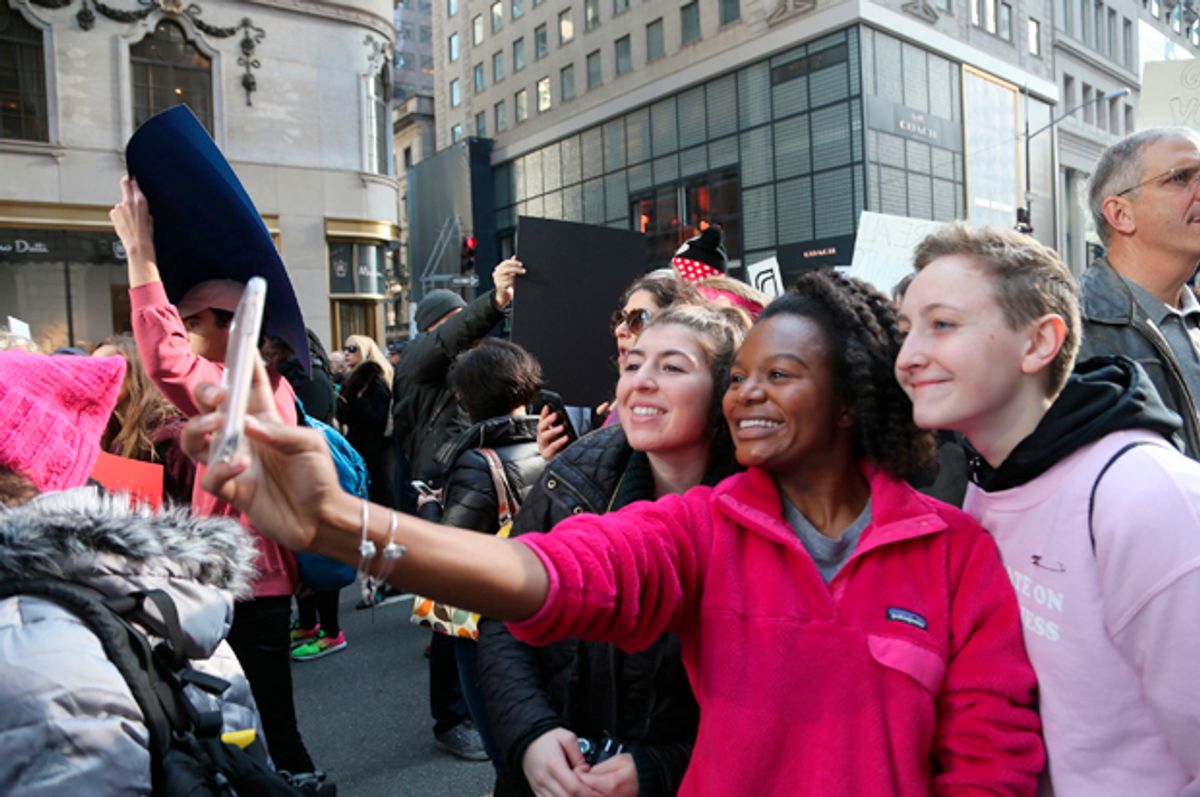 It’s embarrassing to admit now, but attending the Women’s March on Washington didn’t feel like an entirely safe prospect as late as last Friday afternoon. Hundreds of thousands of people were expected to attend. Trump’s inauguration rhetoric was divisive, escalating fragile tensions to a new nadir. There were rumblings about paid agitators; and, in fact, there was violence on Friday.

What ensued on Saturday was as peaceful and positive as could have been hoped for given the aforementioned factors and the higher than expected turnout. While it was a claustrophobe’s nightmare, it was no radical protest. The most violent act of the day was arguably Madonna saying, “I have thought an awful lot about blowing up the White House” and singing that the new president should “suck a dick” — rhetoric which, it’s important to acknowledge, the mainstream media likely would have looked at with more than a shrug if it had come from a cowboy-hatted conservative performer.

For the most part, the day’s mood was closer to a festival or parade than the 1960s protests that have come to define Americans’ protest ideal. Because there were so many people and because it was unclear who the leaders were and what the protest’s mission was, the main attraction at the Women’s March was the signs. Every third person or so waved a sign, and the signs represented a diverse array of issues — the environment (“Clean air = healthy kids”), minority rights (“You can’t comb over racism”), and, most of all, women’s rights (“This pussy grabs back”).

To meander or march down Independence Avenue was to see and be seen. Almost everyone acted as a photographer, documenting with a smartphone; and the bearers of the signs with the wittiest messages or most artful designs were constantly being photographed.

There’s a cynical way to look at the use of photography at the march — that attending, for some people, was an act of vanity. There’s a long history of aestheticizing protesting. In a 1970 New York magazine story, Tom Wolfe satirized how white liberals fetishized the Black Panther Party’s “radical chic” — the Afros, militant garb and weapons chosen by the likes of Angela Davis and Huey Newton.

And indeed, many of the photographs published on social media or by news websites used appropriated grainy black and white filters and revolutionary imagery (raised fists and geometric alignment, for instance) to cast Saturday’s protest in a radical light. Not only were these photos dishonest depictions; they undermined the burden of being a Vietnam War era or civil rights protester: Protesting and being photographed came with many more risks then than it did on Saturday.

But there were too many photographs for the aesthetic choices of all those taking them to tarnish the effect of the images’ whole. The flip side to the mass photographing was that when you look at the #Womensmarch feeds cumulatively, a more accurate story plays out: The diversity of grievances and sheer mass of bodies frames Trump’s detractors not as a persecuted minority but as a persecuted majority.

Being in Washington on Saturday felt like being part of a majority on the right side of history, the embodiment of “they go low, we go high.” Each person was there to physicalize his or her resistance, to be more than a Facebook "like" or a Moveon.org signature. This was the beginning of the hard work — inspired by dire circumstances — whereby each individual had to begin to act as a tiny ant in a big, anonymous colony. What emerges through the #Womensmarch feed is an openhanded collage of dissent.

Of course, President Donald Trump does not see things this way. Like a Third World dictator, after the march his administration issued shameless propaganda (or in Kellyanne Conway’s phrasing, “alternative facts”) denying that Saturday’s crowd was bigger than Friday’s. It was Trump at his pettiest and most sensitive. But his denial also served to reject what the protest represented — that rather than empowering, Trump’s brand of populism oppresses the majority.

Because of the Trump administration’s statement, if any images from the Women’s March emerge as iconic it will likely be two that were taken by a robot: The National Park Service’s EarthCam shot of the Washington Monument at 12:09 p.m. on Friday and the EarthCam shot taken at the same time the next day. In Saturday’s photo, the mall is significantly more crowded and, thanks to all the pink “pussy hats,” more colorful.

The photos confirm what was widely reported, that Saturday’s crowd was more than twice as large as the one on Friday. They were each taken by a robot (an unbiased source) and looking at both together employs a scientific method (comparing samples at the same time each day). They’re not artful photos, but they make visible what many of the signs depicted — that Trump has a propensity to lie and marginalize.